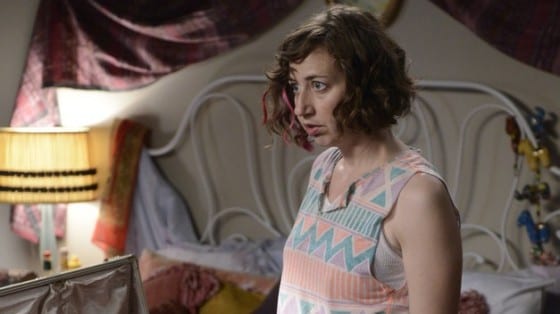 Kristen Schaal guest stars as the disgusting Anne in this weeks episode.

Two weeks later and we’re back and they’ve already managed to insult this writer with their mean spirited, unoriginal jokes about the demonic ginger tendencies.

I may sound hyperbolic but as a speckled individual who’s heard her fair share of daywalker gags enough is enough with the ginger oppression!

The episode is about shame and the emotional damage it can dispel on its sufferers and Wilfred takes a surprisingly unoriginal take to it-in its typical offbeat direction.

The episode begins with Jenna being persistently nosy in Ryan’s life- a nice way to remind the audience that even if she’s Ryan’s dream girl, she isn’t someone without faults.

She tells him that she accidentally found herself with Ryan’s mail and they noticed a mortgage bill for a missed payment. She wants to give him one thousand dollars for watching Wilfred but really it’s just a flimsy excuse for charity which Ryan quickly dismisses. He tells her than he’s fine and that it was just a mistake but the bill is paid and he’s in the clear.

Which of course is a lie because there would be very little stakes if there wasn’t someone Ryan was lying to-whether it be Wilfred, Jenna or himself.

While Wilfred is showing Ryan his new bachelor pad (which contains a rotten fruit, a dead bird and a Maroon 5 poster) Ryan owns up to his lie and says he can’t continue living like this. He needs to clean up his act and start making money in some fashion-or least stop running out of it.

That’s the idea for a roommate comes about and Wilfred in none too pleased. Why? Because it because it means all of the filth and germs that he enjoys so much will be wiped away all in the favor of seducing a new tenant.

Which Ryan does initially with a man who’s around the same age, seems professional and interested. But Wilfred won’t settle for that. Instead, it’s actress Kristen Schaal as Anne, who’s greasy and body odor wreaking appearance that guns for Wilfred’s heart. So much so that in typical Wilfred fashion he sabotages Ryan’s first plans and allows Anne access to the lease, solidifying her stay.

I’ll be honest. Schaal does absolutely nothing for me in any form of comedic fashion. I’m sure there are plenty of people who find her humor styling’s to be endearing and funny but they left me so bereft of laughter than it almost managed to derail the entire episode for me. Instead of being a funny character to me she seemed like a foil to Ryan’s, in such a clear undercurrent way that it was bizarre they tried to deepen the depth of her character at all.

I also just have never, ever been in to gross out humor for the sake of it. So while some may find Wilfred licking her toes, her sweating problems and total disregard for basic hygiene amusing, I’m just the prude in the corner totally disgusted.

The point of her character however is intriguing because it once again exemplifies Ryan’s own need for self-reflection. Sure, Anne doesn’t have her life together but neither does he, the only difference is that the public could look in and pinpoint Anne as being the “screw up” whereas Ryan would appear to have everything together. Its public perception, Anne’s appearance is a mess so she must be one too. This is what Ryan thinks; he doesn’t take the time to ask himself why he cares so much about her odd fetish enabling career of eating food in front of a webcam, her dirty appearance or her abundance of happiness despite these things.

After an interview gone array due to Wilfred’s tinkering Ryan lashes out at Anne despite the fault lying on Wilfred’s shoulders. He tells her exactly what he thinks of her which only succeeds in making the two of them feel awful.

It’s moments in the show like this that I wonder if I’m right about the deep connection between Ryan and Wilfred because in any other circumstance there would be a much larger consequence for what he did to ruin Ryan’s future prospects yet again. He was this close to being a layer again, in a firm not owned by his father, in a place where he could begin to rebuild his life.

But instead of trying to fix his own predicament he instead goes instead to Anne to apologize to her and tell her that he’ll try to help. She’s appreciative saying that there have been plenty of people in her life who have blasted the course she’s chosen but few of her naysayers have offered a helping hand.

So Ryan does exactly that but to what means? Like with babysitting Joffery his sister’s son is this to prove to himself that no matter how low he is there’s always someone closer to the bottom that he can save, or is to genuinely help a person out.

Like Wilfred reminds him (a Wilfred throughout the course of the episode has grown larger and larger due to Anne’s influence), Ryan was never happy when his father was trying to dictate his life or his sister was telling him what he could be doing better, so who is he to think that what he’s doing to Anne is any different.

So the next day we see Anne buttoned up and tucked in and off to her second day of work where she says in a thinly veiled mask that she enjoys her job even if it is just a lot of paperwork and shuffling about.

In his quest to save everyone he also takes Wilfred on a walk in a funny sight gag with the latter in a stereotypical Hawaiian shirt. While walking and moping Wilfred leads Ryan to where Anne has parked on the side of the road on her way to work. Ryan, understanding what this could mean, walks up to her to see what’s up and she tells him she’s fine and that she’ll pull herself together in a second, she knows most people don’t love their jobs but adapt to them. As someone who was ruined by his past career Ryan empathizes and once again apologizes. He realizes that she was happier before, completely assured in herself, and realizes that it was him with the problem.

While the storyline wrapped up sweetly enough I hope that’s the last we’ll be seeing Anne because good lord does the actress grate.

The episode was solid if not quite reaching the quality that the previous ones this season have. It was funny and it has some great character moments but I won’t remember anything other than being grossed out by next week’s episode.

Despite its lackluster tone the ending was so quintessential Wilfred it was almost touching. Ryan is lamenting his life and his friendship with Wilfred and the latter tells him that what does it matter? Is it necessary to question life and his direction so anxiously when he’s found a genuinely strong friendship, albeit with a dog, who he can rely on? It so wonderfully hits the sweet spot of the shows comedy and its sentiment. What does it matter? Sure Ryan isn’t at the top of his field, doesn’t have the love of his life and racks in the crazies like no one’s business but despite all of that he’s still managed to create a friendship with an unlikely ally that has given him a source of happiness he didn’t have before.

This wasn’t the best episode or the worst episode they’ve ever done but what it managed to successfully do is continue to raise my intrigue in what is going on in Ryan’s head. From what we’ve seen thus far it wouldn’t be outlandish to say that he’s on a road to recovery and trying to better himself one step at a time all the while keeping the broken and darker pieces of him at bay but not forgetting them. But maybe all is not what it seems and there’s a reason for Ryan’s dependability on Wilfred, his willingness to excuse his most heinous of actions and the two of them seemingly growing closer. Who knows? Maybe I’m jumping at shadows but the showrunners of Wilfred have never failed in delivering more than what meets the eye.

Ryan is ashamed, but of what?