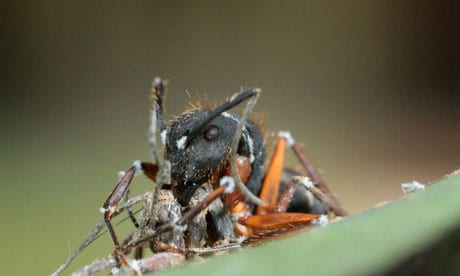 An infected ant bites the neck of an already dead ant (courtesy: The Guardian)

Four new types of fungus have been found in the Brazilian jungle that have the ability to infect ants, take over their bodies and then kill the host body as they see fit.

David Hughes of Penn State identified the new species on a recent trip to the region, and says that though the devastation left by zombie ants can be devastating, there’s a bit of beauty to it.

“It’s a fabulously complex organism,” Hughes told the Guardian. “There is a beauty to the whole thing, whether it is the chemicals at work that take over the ant, or the spores which try one strategy and then another to find a host on the forest floor.”

Beauty is a strange word to describe the process of the infected ants. The bacteria can destroy entire ant colonies, leaving ant graveyards on the jungle floor. Interestingly, most of the ants were seen with their mandables attached to leaf veins so the host is able to easily pass on the infection.

From what researchers can tell, ants become infected when spores are either encountered on the jungle floor or land on them from above. From there, the spores use enzymes to get inside the ants body and the fungus begins to grow. It takes about a week for the ant to wander off and bite on to vegetation in the area. Once the ant finally dies, fungus begins to grow from the ants head which can infect other ants.

So I’ve been playing a lot of the Last of Us, Sony’s new zombie game (which is pretty good BTW) but this hits a bit too close to home.