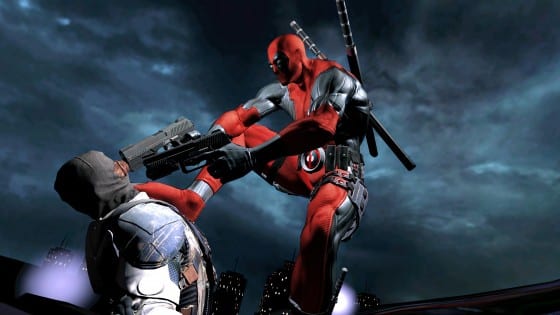 Things weren’t looking good for Deadpool.  After its initial announcement at last year’s San Diego Comic-Con, Activision and High Moon Studios practically said nothing about the game. No big marketing campaigns, no media blitzes, one trailer – and we all saw how that turned out last time (I’m looking at you Walking Dead: Survival Instinct). The good news is that the merc with a mouth’s first solo game appearance isn’t all that bad, in fact – it’s actually quite fun, and the team at High Moon Studios has done a great job bringing the character to life, but make no mistake – Deadpool is an uneven game that earns it’s budget title price point.

It’s forgivable if you aren’t too familiar with Deadpool before picking up the game, Marvel’s comical assassin doesn’t have the name recognition or theatrical presence of a Captain America or Wolverine (no, I don’t count Van Wilder’s turn as the character in the Wolverine movie, and if you do were not friends).  Deadpool, starting out as a villain in the New Mutants back in 1991, the character has become a fan favorite for his wisecracks, breaking the fourth wall and violent style.  Interestingly enough, Deadpool is very aware that he is in fact a comic book hero, which makes for some interesting interactions and sets up the Deadpool game’s plot.

Developed by: Half Moon Studios
Published by: Activision
Genre: Hack n’ Slash/Beat ’em up
Platform:PC, Xbox 360, PS3
What works:  Deadpool comes to life quite well|voice work is well done|
What doesn’t work: Combat is repetitive| Guilty of just about everything it makes fun of| camera issues|frame rate issues|
[rating: 2.5/5]

Deadpool has convinced the staff of Half Moon Games (with a bomb) to make a game about him. What results is a very meta experience which finds the staff writing a script where the merc with a mouth has been hired to assassinate media mogul Chance White. Since Deadpool is very aware that he is in fact in a game, he spends a good amount of time making fun of the writers, the players and the game. Very early on, Deadpool even goes into the script and makes changes as he sees fit. If the Deadpool game succeeds at anything its bringing the character of Deadpool to life like never before, and a good part of that is the enthusiastic voice work of Nolan North, who you can tell has a lot of love for the character and had a lot of fun working on the game.

I’ve always felt that Deadpool works best as an accessory to other heroes; half of my favorite moments in the comics deal with the character messing with the likes of the Avengers or Wolverine, and that’s luckily on display here.  Several Marvel characters make cameo appearances here, like Wolverine and Cable, and they’re some of the most enjoyable moments in the game. I couldn’t help but hope for more though, but understand why more of the big guns weren’t included due to copyright info.

Gameplay wise, Deadpool feels most similar to games like God of War and Devil May Cry as you’ll shoot and slash your way through identical looking bad guys all the while stringing combos together for more damage. At first, the combat is fun and feels incredibly rewarding, but when you realize that its pretty much all you do, you start to appreciate it less and less. Much of the game plays out like this – enter a room, defeat a bunch of enemies, make wisecrack, enter new room…repeat. It’s a formula that fits the game and the character quite nicely but becomes quite predictable long before it should.  It also doesn’t help that the camera is wildly unpredictable and often places itself in the worst possible place.

Enemies in Deadpool aren’t exactly the smartest bunch and must have been on sale at the generic henchmen store, because they don’t put up much of a fight.  They’ll all storm you and then stand right out in the open, shooting at you and seemingly just hoping for the best. The game is also extremely giving when it comes to targeting, so as long as you shoot in the general direction of your enemies, you should score a kill. For what it’s worth, the game does make reference to this, and actually works it into the plot, but it still doesn’t change the fact that it happens in the game, and it happens a lot.

That’s not to say though that Deadpool is devoid of any variety in Deadpool as the developers use the character’s psychotic tendencies to make for some very interesting scenarios. Deadpool will blow-up bouncy castles, transport himself to an 8-bit world and even visit a land strangely similar to that of Sony’s Little Big Planet games. The whole thing feels like an excuse for the development team to riff of the status of games and game development, throwing in jokes about franchises and the current, predictable state of the gaming industry.

The only problem with that? Deadpool is guilty of a lot of what it’s poking fun at. Yes, I get the fact that the game overdoes it a bit for the sake of the joke, but this is the gaming equivalent of making fun of yourself first so the bullies don’t pick on you for something. It’s very clear that High Moon Studios is always on the defensive, but why not go the other route and not include the same gameplay the whole way through? Why not forgo the clichés that you’re poking fun at – all the while displaying yourself?

One of the most disappointing aspects of Deadpool though is how little attention is paid to the character’s history. High Moon Studios does little to celebrate the character, as there’s no real collectibles to be found. No comic book covers, no hidden nods and the only alternate costumes I’ve seen have been offered as pre-order DLC incentives.  Half the fun of these games is reliving your favorite memories and stories of the character, but there’s almost none of that in Deadpool.

Deadpool could have been a lot worse than it is – but even with its quirks and deficiencies – it’s an entertaining romp. Be warned though, it’s not the prettiest girl at the dance, and has some major issues like an almost worthless camera and shallow and repetitive gameplay. Fans of the character are encouraged to check the game out, but those looking for a fun and intelligent superhero romp should stick with Batman and his time in Arkham City.

This review is based on a retail copy purchased by Blast. We played through the campaign and giggled at the dick and fart jokes and played a few of the challenge maps.