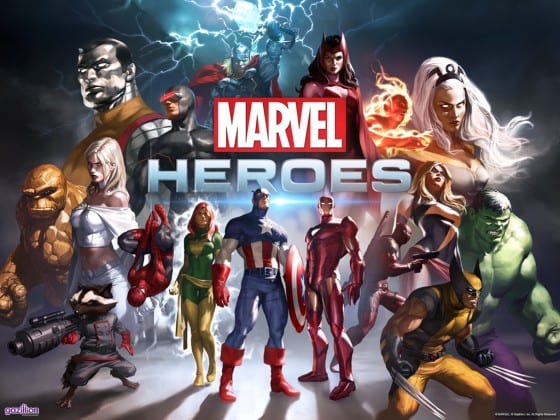 The idea behind Marvel Heroes is so simple; it’s amazing that it didn’t happen years ago. Suit up as one of your favorite Marvel Heroes and take on villains like Magneto, Thanos and Galactus. Unfortunately though – it feels like it should have been made years ago. Marvel Heroes takes advantage of the problems associated with today’s games – it practically begs you for money to get what you really want in the first place and makes damn sure you won’t get it unless you empty your virtual pockets. Combine that with the fact the game’s loot and progression system is miles behind other MMOs on the market and you’re left with a game not worth playing, much less investing your time and money in.

Perhaps I was a bit misleading in my opening paragraph; you’re not going to be able to just jump into the game and pick any hero. You want to wise-crack as Deadpool or Berserker Rage as Wolverine? Not quite yet. Marvel Heroes gives you a set of starter heroes to get used to the game. Upon booting up the game you’ll get your choice of Daredevil, Scarlet Witch, Hawkeye and The Thing to romp around with.  While they’re not a bad lineup, and they do give you a good chance to play with the game’s different classes (Daredevil is melee, Hawkeye is ranged, Scarlet Witch is your caster and The Thing is your Tank), it’s the first sign that something isn’t quite right in the Marvel Universe.

Look, nothing against Scarlet Witch – but no one is installing this game to play as her (though to be honest I was very impressed with giving me Daredevil right away), and Gazillion Entertainment knows that. You see, Marvel Heroes is a Free to Play title, meaning that you’re going to need to plunk down real world money to get the characters you want. To be fair, it is possible to find and acquire the game’s entire 21-character roster for free via loot drops, but you’re going to need a whole lot of luck and perfect timing to do it. Loot drops are so random and at times useless that it’s nearly impossible. During my playthrough I tried, for hours to get characters I wanted just by playing, but by the end I just wanted to pay whatever the game wanted – perhaps that’s the point.

To be honest though, once you do unlock those new characters, you’ll find literally no incentive to switch between them since Marvel Heroes progression system is so strange. Characters level up independently, so say you’ve leveled up your Daredevil character for hours, you’ve grinded and battled, you’ve searched for loot, and then you unlock Captain America. Prepare to start at the beginning and do it all over again with the Star Spangled Super Soldier. The game makes it incredibly draining to get your characters to where you want them to be, and the thought of doing it all over again was just too much to take at times.

Combat in Marvel Heroes is frantic and very reminiscent of the system in Diablo, but is noticeably cheaper. Your average enemies are easy to beat and bosses aren’t much different since you’ll be able to telegraph their patterns quickly and take them out.  It should also be noted that once you learn a character, it’s a lot easier to learn the other characters with the same class as each one controls pretty much the same.

If Marvel Heroes gets anything right – it’s fan service. If you’re willing to progress through the game, there are great nods to the history of the Marvel Universe here. Want a classic costume? It’s in there. Hell – even the costumes from the 90s X-Men cartoon are here.  That still doesn’t fix one of the game’s major problems, the fact that there are always multiples of your character running around, and which loot and equipment they find has almost no effect on their appearance. Damnit, if I’m paying to play as Deadpool I want to BE Deadpool, I don’t want to be a Deadpool.

Marvel Heroes is broken. It’s flawed. It’s cheap and practically begs for your money the second the game boots up. Short of the ability to suit up as your favorite Marvel Hero, there’s not much here to recommend since the game scrutinizes every chance of a microtransaction it can. Since it’s free to play, go ahead and jump in, but beware of dumping too much time and money into this one.

This review is based on an early review code provided by the publisher along with a starter pack so we can experience different characters quicker.