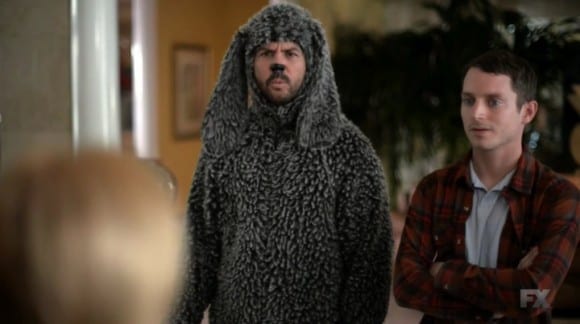 It’s taken me quite a bit to come up with this but on the eve of the season three premiere of Wilfred I realized just how much they got away with.

Yes, I know, it’s FX, but it’s telling when a show can manage to fit in a joke about Anne Frank, a dog getting it on with a stuffed bear and mental illness all in the same episode and make it seem suitable comedy for the show.

I’ve been a vocal advocate for this show and urge my friends and family (even those who don’t share my particular brand of humor) to give it a go and promise them that it will be nothing like they’ve watched before.

Because hey, this is a show that’s original premise was of a man who tries to commit suicide and then befriends a talking dog—or a man in a dog suit however you see it.

However, I also rallied hard for Happy Endings at the start of this year and look how that turned out.

Aside the curse of the low rated TV series, there is something untouchable about Wilfred that sets it’s apart from all of its other contemporaries that go far and beyond the dog suit and Frodo Baggins. This show is a prime example of what a show looks like when it manages to showcase both its comedic integrity but also its nifty way of incorporating dark themes into the lighter outline in order to shock its viewers. But, it refuses to infuse moves just for the sake of “shock value.” Sure there are plenty of seedy moments, messy physical comedy and almost any innuendo you could dream up, but despite all of the arrows pointing at the showrunners as trying to push their limits, its atmosphere suggests a naturalistic quality.

It doesn’t choose to surprise us, it just does.

The show is however pleasantly divisive and the season three premiere perfectly exemplifies why.

We begin essentially where we left off with Ryan questioning his own past and why an old childhood hand drawn picture would have Wilfred in it. He goes through some theories (a nod to some of the ridiculous fan-derived ones) such as time travel before landing on the most logical solution: mental illness.

And he says so happily which Wilfred doesn’t understand. Ryan tells him that if it’s because he’s been living with some mental illness it would mean that Wilfred was just a pigment of his imagination, a cause and effect of psychological breaks. This he says confidently, is a good thing because now that he can admit it to himself, he can start down the road to recovery.

Instead Wilfred pulls a joke on him and pretends to disappear just before popping back up again.

He has a much crazier theory than Ryan and says that he believes he’s immortal, a magical being that’s joined Ryan multiple times throughout time but just doesn’t remember them. To prove this, he drinks an antifreeze-tini and lands himself at the vets having to have his stomach pumped.

He lived he says, which must prove his point.

While at the vet they learn of Wilfred’s previous owner and track her down to prove that Wilfred was born which would prove that he is in fact, a mortal dog.

Instead they find what appears to be his real puppy home and finds something either weirder: a Wilfred Clone whose name is Lord Charles.

Heather (Angela Kinsey, The Office) has been in charge of him ever since his owners died but all is not what it seems when Wilfred realizes he has been there before, vaguely remembering his puppy days. Ryan refuses to believe him and after some sexual gallivanting with two stuffed giraffes and bonding over cocaine, Ryan forces Wilfred to leave Charles side and come home with him.

In the car on the way home, Ryan is more assured than ever about his mental instability when Wilfred offers him yet another deadly cocktail. He tells him that this is what he has been for the entire time. Ever since Ryan attempted to commit suicide he’s seen Wilfred who’s proven to create more questions than answers, causing more problems than relief. Maybe Wilfred has always been a beacon of death, a guide to the place Ryan had originally wanted to be. Maybe, Wilfred asks, the questions just aren’t worth it anymore.

And Ryan may have almost believed him if it hadn’t been for a slip of the tongue that proved it was Lord Charles and not Wilfred. Ryan drives him back to find a costumed up Wilfred being photographed by Heather and makes the switcheroo.

At home later that night Ryan burns all of his memorabilia that he had collected from his past as a declaration to quit dwelling on it. Maybe he’s crazy, maybe there’s something wrong with him that should be addressed but the easiest option is for him to simply forget, ignore and focus on his future.

This is also the main topic of choice in the second episode “Comfort” which has the return of Jenna and Drew and a reformed devout Christian version of Wilfred, in one of the nuttier episodes the shows ever done.

The episode centers on Ryan’s new friend the postman Bill (Happy Endings’ Zachary Knighton which is just perfect) and Wilfred’s awakening to the idea of death. He believes that Ryan needs to be comforted because of his ex-girlfriend, Amanda, and her spiral into madness. Ryan believes he needs to get over it.

So instead he befriends Bill, who likes to drink, has Slayer tattoos and isn’t afraid to make jokes at the expense of other people—which includes opening undeliverable mail.

Wilfred though, after finding God, believes that Bill is satanic and does all that is in his power to make Ryan ditch him which includes sending Jenna and Drew to meet up with the pair.

Jenna sensing that Ryan isn’t doing so well suggests that they have a meet up, just the two of them to talk and catch up.

Ryan is furious with Wilfred and ditches him to spend an evening at Bill’s place with his friends. All is going well until Wilfred appears, always the bearer of a troublesome time, to stop Ryan from engaging with these supposed Satan-worshiping individuals. After a close call with some illegal fireworks Ryan finally decides to leave on his own when he sees Bill be comforted by his friends because of a fallen postman Barry, which leads Ryan to believe that talking to a close friend isn’t all bad.

It would have been a perfectly fine sweet scene to top off a crazy episode if it hadn’t ended with the implication that was Ryan was into Jenna again. For two reasons:

1. This show doesn’t operate well under the constraints of a will they/won’t they narrative. It’s too weird, it’s too dark and it would seem forced and was one of the main reasons why season one wasn’t a complete success.

2. I like Drew! If Drew was still a grade A jerk, then I’d still think a romance plot was a bit contrived but I wouldn’t be actively annoyed by it. However, I think Drew’s funny in an oddball charming way that works for the show and I don’t want to see him screwed over for the plot.

Those problems aside this was a perfect way to introduce season three and reintroduce the characters.

Elijah Wood, who is so much more than just the straight man character to Wilfred’s crazy, is also allowed to play with themes of his character and the underlying depression. Here is a character, set under the premise of a comedy, who has been allowed to break the confines of his genre’s box. He isn’t always happy-go-lucky, he isn’t in a constant state of awe-shucks moments, but rather is a dark character reacting to funny moments.

It was a fantastic start to one of my favorite comedies currently airing and it’s wonderful to see the dynamic duo back on screen and wreaking more mental havoc.

It seems for now that they’ll continue the two-episodes-a-week process, and for now it appears that the narratives are going hand in hand.

What will be the big theme of the season? Will Ryan do more soul searching? Is he going to fall further into his own mind? Will we be forced to endure an unwanted love triangle?

Who knows, but I’ll enjoy whichever direction they chose to take because no one does crazy like Wilfred does.