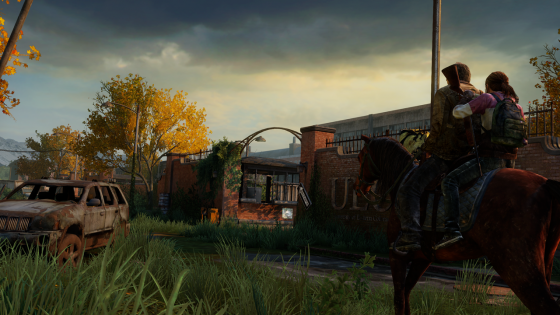 Gamers are no strangers to the apocalypse. They’ve unloaded countless rounds of ammo into the undead horde and hacked off more limbs with chainsaws than they could count – but The Last of Us is different. Sony and Naughty Dog’s latest title isn’t interested in scaring you with hordes of infected and cheap thrills. Instead, it chooses to tell a tale of loss and heartbreak, of desperation and survival.  It is beautifully balanced and paced, and one of this generation’s definitive must-have games.

It would be easy, at least upon first glimpse, to simply dismiss The Last of Us as Uncharted with Zombies, but it’s far from it. Yes, Naughty Dog’s latest does take on the apocalypse but it’s far from just another entry in the overcrowded genre. In the world of The Last of Us, the infection that causes the downfall of humanity is fungal based and anyone who breathes in infected spores starts turning, and it’s the same fate for those who get bit or scratched. Naughty Dog does a great job at making the outbreak and its resulting effects on both humans and the world around them feel very organic. You’ll encounter enemies at different stages of the infection, and it’s interesting to see the just how the disease starts to take effect.

At the heart of The Last of Us is the relationship between the game’s two main characters, Joel and Ellie. We’re introduced first to Joel, who lived a pretty normal life before the start of the infection, where he watched his own daughter die at the hands of non-infected humans.  Now twenty-years later, Joel has survived, but he’s much more rugged and much slower to trust. It isn’t long before Joel and his partner Tess are charged with escorting Ellie to a group of militia rebels named the Firefies in exchange for guns and that’s where The Last of Us begins proper.  Much of the emotional drama of The Last of Us centers around the growing relationship of Joel and Ellie, as he tries to protect her like the daughter he couldn’t.

The world of The Last of Us is vastly different from the one you know. Following the outbreak, humanity setup smaller camps that are mostly safe from the virus and those who have been infected. These cities and camps brim with life and personality, interacting with other survivors and exploring the ruins is a major part of the fun here, as there’s a ton to discover even though this is a mostly linear affair. Outside of those camps though, the world is far different. The virus spreads wild and the infected prey on survivors.  To survive you’ll have to move about carefully and scavenge when you can to find anything that can help you.

That’s probably where The Last of Us becomes most memorable, whereas most zombie-esque games hit you with huge numbers of enemies, The Last of Us gives you smaller numbers but a much bigger challenge. I’ve played through seas of the undead before in games like Left 4 Dead and Dead Rising, but The Last of Us is the last time I felt sheer terror running through the undead.  If you walk into a room of the infected and try to take them on without being prepared, you’re likely to face a grisly death. There are multiple types of enemies like the newly infected runners to the Clickers, who have been infected for a while and as a result have lost their sight but have incredible hearing. To be successful in The Last of Us, you’re going to survey your surroundings and plan your attack.

Take a section earlier in the game where you enter a broken down skyscraper with two Cickers and about four Runners. You’re encouraged to take different approaches to each confrontation, so I sneaked around and began to strangle the Runners from behind. Everything went well until I accidentally alerted one of the Runners and had to pull out my trusty lead pipe and begin to fight my way out. I thought I was out of it until I was attacked from behind by a Clicker, who are very hard to push off and take out unless you have a shiv – which I didn’t have. Ammo, health and resources are hard to come by in The Last of Us, and you’ll have to search everywhere to find items you can combine to make things you’ll need. Tape and scissors for example will give you the ability to make a shiv.

When the credits rolled on Naughty Dog’s Uncharted series, I felt similar to the way I did when I leave a Theater after a Hollywood blockbuster, but after The Last of Us, I felt like I should just go outside and enjoy humanity for a while. There is a message to The Last of Us, but the game never feels preachy; instead, it’s a brilliantly paced and emotional story that will grip you beat by beat. The score is also top notch and mixes well with the game’s crescendo moments as it does in the more lighthearted ones. The quality voice acting makes every beat of the character’s journey feel incredibly more emotional and even more life-like.

If Uncharted is Naughty Dog’s big budget, summer movie franchise, The Last of Us is their labor of love they get to make simply because they want to. Though it does have a few camera issues (read, very few), there’s more than enough to make The Last of Us one of this generation’s premiere titles. It’s remarkably paced and even more tense and fun to play. Simply put, if you own a PS3, there’s no reason to not own this game.

Editors Note: This review is based off of a pre-release copy of The Last of Us that Blast Magazine received from the publisher. We played through the entire single player game and hid from a lot of Clickers. Since the multiplayer portion of the game was unavailable pre-release, it was not included in this review. Look for a seperate review when it goes live.