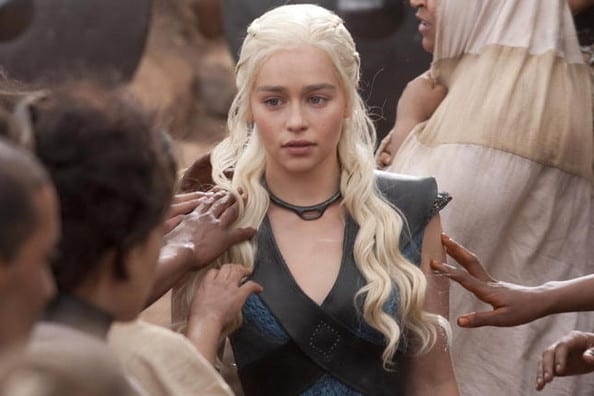 Dany (Emilia Clarke) walks into the crowd of people she has just freed.

Who else isn’t surprised that Davos turned out to be the most honorable man in Westeros?

Who else is surprised that Davos ended up being the MVP of the finale other than this girl right here?

This didn’t factor into my three point wish list that I wrote before the episode began. For the hell of it I’ll share anyways.

There are a number of things that the season finale needs to have in order to succeed:

2. It needs to create buzz and intrigue: excitement that packs such a punch that it can sustain fans over the ten month wait.

The problem with the penultimate episodes on this show is that it sets the finale up for certain failure. Characters spending an hour just talking is always going to seem lackluster after a massacre.

I hoped this time it would be different.

We were left in such a tightly packed ball of suspense after last Sunday’s episode—so much so that people were still talking about it yesterday—so how do you sustain that level of momentum and, more interestingly, can they top it?

They didn’t. Out of my three bullet points, here’s my tally:

1. It did tie up loose. It tied up loose ends I didn’t know existed.

2. It didn’t create buzz but it did allow us to see where the storyline was going.

3. I was mildly bored around forty minutes in.

So they didn’t really achieve the making of an outstanding finale that would help carry us through the Thrones dry spell (except for you non-book readers, here’s a really good chance to catch up.)

Despite the disappointment the episode was still held afloat by three major points:

1. The increased likeability and interest in a well-known character.

This may seem frivolous to many but the interest that Davos piqued in the finale (better late than never I suppose) was fascinating to behold. Not only was he charismatic but he also struck up a highly interesting concept as I mentioned above: is he the most honorable man in Westeros? And does that explain why so many people find his character to be lacking?

Sure people such as Ned and Robb were loved but they were loved more so after they died and once they became a martyr. While they were living they were interesting and we rooted for them but we cared more for the other Starks or the shady and corrupt Lannisters.

Davos, like Robb and Ned, is pure hearted in his need to support the man who he claims saved him, but also cannot help find himself straying from Stannis’s ruling. Not out of contempt, but out of his own good will. He sees himself in Gendry. Both lowborn, both from the same poverty-sacked city and both have been warped into believing the promises of a beautiful woman.

But now Davos is worn down. He’s been imprisoned by the man he called a friend, has lost a son due to his faith in said man, and is watching as Stannis plans to murder Gendry to ensure the rising of his nobility—all on the hunch of what Melisandre can see in the fire.

Davos goes to Gendry to release him. He had told him earlier that his son died following him, after having promising a better life. So now he asks Gendry to follow him and for Davos this is some form of repentance. He has been given a second chance to listen to his gut and as he sets Gendry in the right direction he says he’s doing it because it’s right and because he’s a slow learner.

Again, it may seem inconsequential but this noticeably played a big part in this week’s finale. Imagery has always been a talking point within the show but more so for the scenery, for the landscapes we’re graced with due to the show’s determination to create the most authentic atmosphere that they can. It’s rare though for Thrones to impress from a directorial standpoint and this episode did just that.

With Stannis’s camp there was the shot of Stannis taking centerfield as Melisandre and Davos flanking his sides, offering their wisdom which spoke of a devil and angel relationship, both whispering their take.

There’s the beautiful shot of Jaime finally returning to Cersei, not as the man she remembers. Cersei who is often looked upon as hardened and cruel. The way the shot is staged she is considerably softened as we’re getting a look at her alone—something that’s rare on this show as we’re often getting others’ viewpoints of her rather than her in her quieter moments. Here she’s looking at her children’s toys and in a smart costume move, isn’t wearing one of her typical armored dresses.

Jaime walks in and sees her and despite the ick factor of their love there is undeniable nobility to their forbidden love that is both obvious and troublesome.

3. The talks of monsters

As we’re introduced to the episode as we see men of Walder Frey’s army marching a decapitated Robb with his direwolf’s head mounted on his body, it’s very easy to think that Tywin is an evil man.

When we later see an unhinged and reckless Arya scheming her way into stabbing a man to death out of fury it’s easy for us to think good for her. Look at her go, finally getting her revenge.

Tywin later tells Tyrion that what are the lives of a dozen men in return for the end of the war? What is the difference between men dying on the battlefield opposed to men dying while eating dinner. In his mind, Tywin has lowered the body count and shortened the time of the war. In his mind he’s done something noble.

While Arya has killed men out vengeance. There was no strategy, no need, just her blind rage that guided her hand. And while it serves as showing us that Arya is no longer some feisty little girl but a potential killer, it also makes us wonder why it’s okay for us to cheer at her vengeance but boo at Tywin’s plays at war?

Tyrion at the very beginning is called a monster by Joffery and Tyrion warns him that if that’s the case Joffery must speak softer to him then because monsters aren’t those kings want to mess with, considering kings have been dropping like flies lately.

Joffery is sent away and again we’re left with questions. Obviously we don’t see Tyrion as a monster, especially considering in the world of Westeros he’s perceived as such due to his dwarfism. However, can we see him turning into the monster that everyone predicts? Will he, like Arya, be sold one too many blows and have nothing left but his need to avenge, his need to survive? What does it do to a human to be stripped to nothing more than basic survival instincts?

It also delivers us the haunting scene between Tyrion and Tywin where the former is dubious of Tywin’s true intentions. He believes Robb’s death was to benefit himself, rather than the family and he demands to know when Tywin has ever done something just to benefit the family.

And Tywin tells him in a momentarily lapse of control that letting Tyrion live was one such act. When Tyrion was born Tywin wanted to walk him into the sea and let him drown but he didn’t because he held the Lannister name. Is Tywin a monster for his words and not his actions? It’s hard not to see him as that as we watch Tyrion’s disbelieving face.

Is Theon still a monster for killing those two boys after being tortured into losing his manhood by a human who personifies sadism? Is Arya a murderer for killing that man? Is the Hound a hero for saving her from the rest?

Are Robb and his camp martyrs or idiots? Is Sansa still viewed as that materialistic little girl or have people seen her for the broken young woman she’s become. Is Dany the liberator or the conqueror? Is Joffery a product of nature or nurture?

This is what makes Thrones so fascinating because it plays with the perceptions we’ve had of fantasy heroes and villains that we’ve all held since we first read Lord of the Rings where there is the defined side for the good and the light and a side for the shadows. We don’t know who’s on what side, who trails the middle line and who might end up at the series end to be dead or alive.

This episode, despite being thought-provoking for the over analytical, tied everything up. We saw Bran interact with Sam before Sam headed to Castle Black and Bran headed beyond the wall (in a shot I might add that showed Bran looking very kingly…I swear he’s a pawn in this story that will move further up the ranks just as Jojen predicted). Ygritte got to shoot Jon with arrows as a final goodbye before he too found himself back home at Castle Black.

Davos is kept alive because he promises he can provide an army for Stannis to march North with, with Melisandre’s blessing saying that Davos will play a key part in the upcoming war.

Arya is off with the Hound, Sansa is stuck, Jaime has returned home and Tyrion is more lost in what he’s called home than ever before.

It was far from the best finale it could have been and it left some to be desired, but it served its purpose in telling us what has ended and what will continue next spring. Maybe next year they’ll succeed in creating a compelling finale.

Read the books! Catch up! And come back ready for what craziness is bound to happen in the show’s fourth season.

I’m already counting down the days.