So you’re finally the mayor of your own village, but realize the title doesn’t come with a fancy salary. As is the case with every Animal Crossing game, your days in New Leaf will be spent figuring out ways to make enough bells to afford the finer things in life—not to mention, ditch your tent and afford a house. Not only will you have Public Works to fund, but you’ll also have several house loans to pay off and furniture to buy. So what’s a New Leaf mayor to do? Here are some tips on ways to make fast bells and make your financial problems disappear.

Paying off your first loan

You’re new in town and everyone has high hopes for you as their new mayor, but there’s one problem—you live in a tent. Before you practice your mayoral duties or visit your tropical island, you’ll need to pay off Tom Nook’s initial loan of 10,000 bells. This number may seem like a lot considering you have nothing on you, but it’s not difficult to pay it off in a few hours. 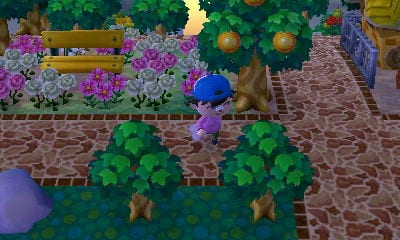 What you should do right away is pick all the trees in your town and sell them for bells. Native fruits cost 100 bells each, but depending on how many trees you have, that’s about 3,000 bells right there. Don’t forget that you’ll also find one perfect fruit on one of your trees. Perfect fruit look different in shape or color and sell for 600 bells each. Instead of selling it, plant it to produce a perfect fruit tree for even more quick cash later on. Trees take 3 days to regrow fruit after you pick them and 4 days to fully mature once you bury a fruit in the ground.

If you’re lucky, Nookling Junction will have a fishing rod or a bug catching net for slae. At this point, your best bet is to hope for a fishing rod and head to the beach to catch some pricey fish. You may even catch a shark, which will instantly pay off your initial loan. If no fishing rod is available, you’ll need to catch bugs for profit. It’ll take longer than fishing, but you should have enough money in no time. 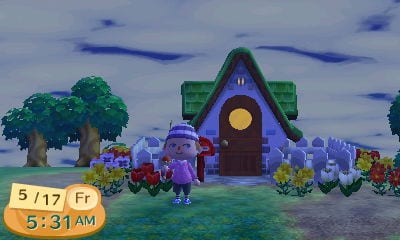 Once you’ve paid off your initial loan, you’ll realize that your house is super cramped could use some expansion. As usual, you’ll need to continually pay off even more loans for your home to get bigger and better. Your next loan will total 39,800, then 98,000, followed by 198,000, and finally 298,000 for an upstairs room. And even then you’ll have the option to add four additional rooms and expand them even further. That’s 19 loans totaling over 7 million bells. Sounds like a lot, huh? Well, here’s how you can pay all this off in less than a month and still have bells to splurge on clothes and furniture. 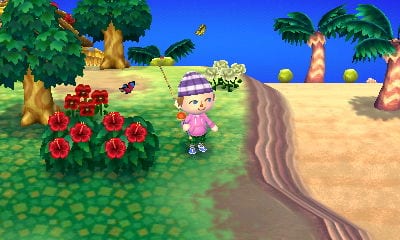 Once you pay off your initial loan, you can head to your Town Hall office to enact ordinance to make the town run to your liking. Since you’re looking to make plenty of bells quickly, select the Bell Bloom Ordinance to hike up the price of things by 20%. Sure, items will cost more, but the bugs and fish you’ll sell will net you an even prettier penny.

Your island will be available two days after you pay off your initial loan of 10,000 bells. You can travel to your island however many times you want during a day for 1,000 bells a trip. The island not only gives you mini-games and an always-summer climate, but it’s also a haven for making bells. 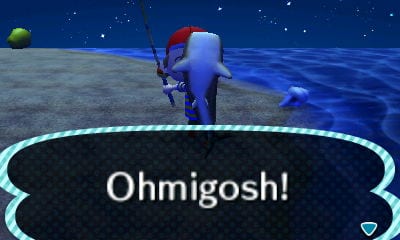 All the expensive fish and bugs come out in the evening after 7 pm, so don’t travel to the island earlier than this unless you want to play mini-games and steal fruit from the many trees you’ll see. Anything you take with you during a mini-game (flowers, bugs, fruit) stays with you after the mini-game finishes, and you can then take these items with you home and sell them for a profit. Non-native fruit sells for 500 bells a pop, and tropical fruit like bananas and coconuts sell for 200 bells each. Plus, you don’t have to wait for trees to regrow as mini-games will always provide you with trees ripe for the picking.

After 7 pm, you have two options when it comes to making bells. You can always cast your line and hope to catch expensive tropical fish or even rare sharks that sell for 15,000 bells each, but this method can take a long time. Plus, because fish appear as shadows in the ocean, you won’t always know what you’re going to get. There’s a chance you might not tap the button in time when a fish bites as well.

Instead, what you should do is prepare your island for beetles, which only come out at night and will spawn constantly every few seconds. First, chop down every tree on your island and leave two palm trees on opposite ends and one regular tree in the middle. This will make It easier to sneak up on beetles without scaring them and will also provide you with enough trees for them to spawn on. Then, all you need to do is borrow a net and walk around until you see a beetle hanging on a tree. The easier thing about catching beetles compared to fish is that you can see which ones you want to catch and which ones aren’t worth much to you. 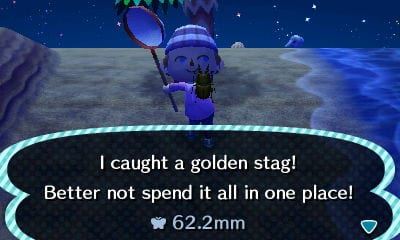 Dynastid beetles will be the more common ones, but only sell for 1,350, so if you see them hanging on a tree, run into them to scare them away. In fact, scare away anything you don’t plan on catching. The island can only contain 4-5 insects at a time, so each time you scare an insect you don’t want like a hermit crab or a wharf roach, it’ll make room for a prized beetle to appear. You can’t scare butterflies away, so either catch them or enter and exit the hut to load a fresh batch of insects.

The beetles you’re after include the Atlas Beetle (8,000), Elephant Beetle (8,000), Cyclommatus (8,000), Rainbow Stag (10,000), Hercules Beetle (12,000), and the rare Golden Stag (12,000). If you catch bugs after 11 pm, you’ll also run into the Giant Beetle (10,000). Note, these are their prices before adding the 20% increase the Bell Bloom Ordinance bestows you with. Remember to hold your net and approach them slowly, leaving one space between you and the tree before releasing the button and catching them. 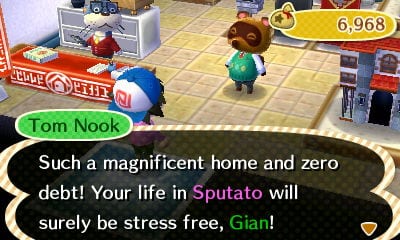 Your nightly routine should involve heading to the island, catching enough bugs to fill your souvenir box, and then heading back home to sell them at Re-Tail before they close at 11. If they’re closed after you come back, you can store your bugs in your house and sell them the next day. Repeat this process and you’ll be making a million bells in just a few hours. Within a few weeks you’ll be able to pay off all your loans and afford any Public Works project you want. 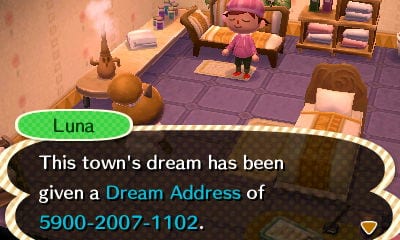 Every day, a money rock will randomly appear in your town and generate  bells after being hit with a shovel. You can repeatedly hit the rock for increasing amounts of money, but you only have a limited amount of time before it stops giving you bells with each hit. You’ll experience knock-back with each hit, so it’s a good idea to dig some holes behind your character to keep you in place while you’re hitting. Another way to make quick cash comes after building the Dream Suite. Each time you update your town’s data and upload it to the servers, Luna will give you 5,000 bells, so it’s not a bad idea to take a nap every day. Lastly, fossils you’ve already sold to museums can also be sold for high prices, and since you get 4 fossils in your town each day, you’re bound to run into ones your museum already has.

So there you have it. The real solution to anyone’s loan troubles involves catching beetles. If only real-life loans were that simple. Tell us how you’ll be spending your first days in your new town and be sure to check out our Animal Crossing: New Leaf review. Your new town awaits!