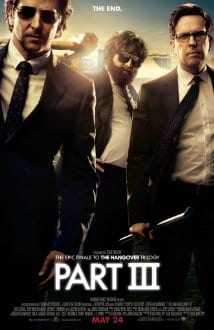 If there’s anything I hate more that going to a movie I don’t like, it’s going to a movie I don’t care about. I want to care. It’s my job to care. It’s my passion and thrill to say something vaguely meaningful about this incredibly expensive piece of ephemera that a year from now I will probably be able to pick up for $4.99 in a Best Buy bargain trough.

But I don’t care about “The Hangover III.” I really, really don’t.

“The Hangover’s” popularity has always slightly baffled me- Todd Phillips, the director of the three movies, seems to concentrate so hard on making his gags cultural touchstones that he forgets to make them, you know, funny. What follows has always seemed kind of desperate- while watching the second movie the other day I kept borrowing a quote from the much funnier “Mean Girls.”

But Phillips persists in trying to make us care about this stupid series with a third installment (and final installment, if the trailers are to be believed). Instead of another bachelor party gone haywire, the three members of the pack are drawn in to search and capture their old nemesis Mr. Chow (Ken Jeong) who has escaped from Thai prison and stolen from another criminal (John Goodman- I didn’t feel like looking up his character’s name.) The gents travel to Tijuana and then back to Las Vegas in search of their old foe.

There are precisely three funny moments in the entire two hours. One is the well-known scene where Alan (Zach Galifianakis) accidentally kills a giraffe- I swear to God, I’ve seen that moment like a dozen times now and it does still make me laugh. Another is when Stu (Ed Helms) is driving into Vegas, regards the skyline darkly, and mutters “Someone needs to burn this place to the ground.” The third is when Chow is singing Johnny Cash’s “Hurt” at a karaoke bar. Bradley Cooper doesn’t have any funny moments, because he’s not a particularly good comic actor- though at one point he does swing a sledgehammer at a wall and it’s very enjoyable to watch, if you’re a fan of that sort of thing.

There. I just told you all the funny parts. Now you don’t need to shell out $10, and you can stay home and not watch a bunch of progressively awful things happen without meaning or sense or any particular narrative thread. But if you decide to go anyway, stick around until the end. I had thought they were going to make it the whole two hours without any blatantly homophobic/transphobic scenes that make you want to sell all your belongings and move to a hut where you don’t have to see something so vicious and unpleasant, but just after the credits there it is! Men with boobies, ewwwww! I won’t go into it more, but the one good thing it did was rouse a slight twinge of hatred out of the swamp of my malaise.

Good. Then it’s settled. So, you can go shave your back now. Bye Todd.