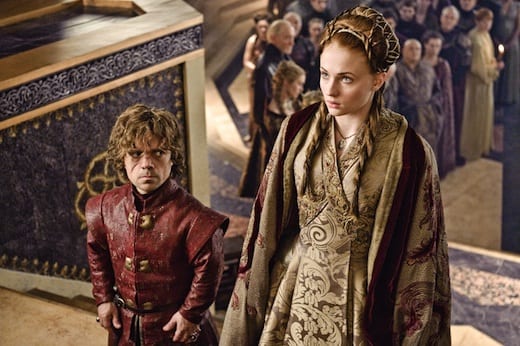 The lonely, the defeated and the ones with the most to lose share the spotlight this week in a return to form episode that makes up for the wildly lackluster one from the previous week. This week’s focus takes us to a wedding at King’s Landing, a courtship between a sellsword and a mother of dragons, and to a masqueraded dungeon where sharing the blood of king means sacrificial death. It’s the first episode where I’ve felt Davos as a fully realized character with idiosyncrasies and depth, it’s the first episode of the season where Peter Dinklage has gotten to tout the skills that made him such a force of nature in the second season, and it’s the first of the season that’s dedicated enough time to Sansa’s character so that we’re allowed more of the character that the naivety front.

It’s the last bit that thoroughly entertains this week—whether it is upsetting or delightful.

It’s the wedding day for Tyrion and Sansa but they’re bereft of the pleasantries and bells and whistles that come along with other ceremonies, which seem fitting for such an oddly placed pair.

The first shot of Sansa cleverly shows a doll in the far corner of the screen, juxtaposed with her being dressed for her marriage. She’s very young in all senses of the word, only fourteen years old and still new to the outside world having most of her years spent in Winterfell and King’s Landing. Despite this and the fact that it’s made abundantly clear how young she is throughout the entirety of the episode, a running theme, Sansa is no longer a child by any means. She keeps a childlike spirit in hoping for the best and trying to search for the ever shrinking silver linings, but she isn’t dimwitted, she isn’t as ignorant as those around her (and the audience) seem to believe. She’s been wearing a carefully crafted mask since she’s watched her father die at the hand of her sadistic betrothed. Sophie Turner has grown up before our eyes into a finely tuned actress and with Sansa we’ve watched a young girl grow more and more accustomed to the safety of caution.

Tyrion goes to have a quiet moment with Sansa before they’re forced to marry and tells her in private that he’s sorry. That he knows he could never be the husband of her dreams and that it wasn’t his wish for this to happen. But, he promises her, he’ll never hurt her and he believes that he knows how she’s feeling.

She doubts it. Tyrion to her still has power and wealth and those two things should create happiness, while she has nothing. No family to attend her wedding, no father to give her away, nothing to her name as long as she’s married to a Lannister.

He tells her that they both don’t know what the other’s feeling then. Because Tyrion is feeling trapped, both of them kept at King’s Landing by circumstances beyond their control, both with feelings of absolute vulnerability in the hands of Joffery or Tywin. These two characters are interestingly enough two of the most engaging as well as sympathetic characters.

Joffery walks Sansa down the aisle because as he points out, her father is dead and as “father of the realm” it’s his duty to give her away. Turner plays the frozen terror and resolute acceptance beautifully here and she walks towards her husband-to-be through a crowd of unfriendly faces.

What follows is an example in just how many uncomfortable scenes I can handle as Tyrion must robe Sansa but due to Joffery being who he is, he has taken his step ladder. Instead he must tell Sansa to kneel down, disgracing them both in the process in the eyes of the kingdom.

Later Tyrion is messy drunk and Sansa asks to be excused from having to bear witness to her own humiliation. Tywin on the other hand cannot allow his son to make such a mockery of the entire ceremony and tells him that this day hasn’t been about the marriage, but about the consummation of the marriage. Margaery and Renly were married, but it made little difference in the end when she didn’t have a son to carry out his name. Tywin tells Tyrion that it’s his job to impregnate Sansa in order to have any stake in the lands her name brings.

Joffery is trying to goad the couple into their bedding ceremony when Tyrion puts a stop to it. When Joffery tries to push more Tyrion fires back in such a menacing manner that it’s not surprising Joffery reacted not only in indignation, but fear.

Tywin tells them all to settle down as Sansa and Tyrion make their way to their chamber, solemn and intoxicated.

We get a beautiful scene between the two as Tyrion tells her after she’s accepted her fate that they don’t have to sleep together. That they won’t ever have to share a bed until she wishes it to be.

And what if that is never her want, she asks him, steely and strong in a way we haven’t gotten to see of Sansa in quite some time.

Tyrion studies her and says “And so my watch begins.” For what exactly? Words of the Nightswatch and in this sense is him saying he’s choosing a life of celibacy with his now wife, or is saying he’ll wait until she’s ready? Is this him acknowledging his sentence into a loveless marriage?

Peter Dinklage is brilliant in this episode reminding all viewers of his tour de force capabilities. He is a fantastic actor who has the ability to be threatening, warm, comedic and heartbreaking in mere moments. He’s crafted such a persona for Tyrion that it’s almost difficult to discern the actor from the character—aside from the often iffy accent. We haven’t been privy to a true performance from Dinklage so far this season so to see such a large portion of time dedicated to him was thrilling to see and reminded me of what I was missing. Throw on top the talents of Turner and the couple’s interesting rapport this might have been the most interesting character development this season so far and I can’t wait to see the furthering of the dynamic.

Now that I’ve gushed, here’s what happened across the sea.

Deanery’s is continuing her badass streak and has managed to convince one of three sell swords to kneel for her but not out of faith or power but because this man, Daario, respects beauty and intends to protect it.

Because you know, priorities.

This is a defining moment for Dany not only because it introduces yet another crucial character for her survival but it shows her embracing her place in the world.

It’s one of the few times on the show I’ve felt that nudity was used to enhance the plot.

At the start of the episode she was saying that men cannot afford losing gold to a girl and later played up the idea that as a woman she knew nothing about wars, allowing a fellow sell sword to demean her because of her gender.

Yet when Daario goes to her and tells her he’ll fight for him after killing his two comrades.  Why should this inspire trust she asks him? Because he did it for her after they told him to kill her.

So she stands up in the bath allowing him to gaze at her and she robes and it’s powerful. She rejects the idea of modesty because she is not one for him to use just for her beauty, but also must respect her.

Now there are no secrets.

At Dragonstone, Melisandre is using sex for tricky actions as she seduces Gendry in the name of her Lord of Light. Yet the seduction becomes a bit too much for him when she ties him to the bed only to bring out leeches and place them on his body.

All of this to prove a point. Stannis, earlier in the episode had released Davos despite the latter’s concern over Stannis’s agenda. Davos believes that it is cruel to kill a boy whose only crime is his birth father, believing that it’s murder. Stannis says its sacrifice but Davos says they’re different words with the same definitions. He’s killing a boy and Davos spent his life trying to shield his own sons from death. He tells Stannis that who are these Gods who wish for death when he’s spent his life using said gods to ensure peaceful dreams for his sons.

Despite this, Stannis still lets him free only to see the tail end of the leech torture. Stannis had told Davos that he’d seen a great, wintry battle in the fire, and he wants to prove the power of royal blood.

Stannis tosses three leeches into the fire, calling the names of Balon Greyjoy, Robb Stark, and Joffery. The three greatest threats to his kingdom.

Arya is allowed a small but significant scene as we find her stuck traveling with the Hound who tells her that she can try to kill him if she wishes, but it will only hurt her instead. She’s believed this whole time that he was taking her back to King’s Landing but he tells her he’s bringing her to her mother and brother since they’ll pay him for her. The look of joy on Maisie Williams’ face is so earnest and so hopeful that you can’t help but hope she sees her family soon.

The last scene of the episode is one that I guess is important to the plot but also one I could care less about. Sam and Gilly have found refuge but soon find themselves under threat when a white walker comes searching for her baby boy. Just as it appears that the white walker will succeed we see Sam grow some courage and stabs it in the back with the dragonglass blade he’s had on him for a while now.

And it kills it, shattering it to pieces, as Gilly and Sam run away.

More than anything this signifies that white walkers can be killed, but with some very deadly tools. It also allows Sam a moment of bravery of which he is typically lacking.

This episode is successful not necessarily because it moves the plot along, because honestly by the end I don’t know if we’ve actually made any progressive steps, but it allows for some wonderfully acted character moments that can make or break an episode. We don’t get another episode for two weeks which will be the penultimate episode—which in the series’ history has always been the highlight of the season.

Do you think this one will continue the trend?