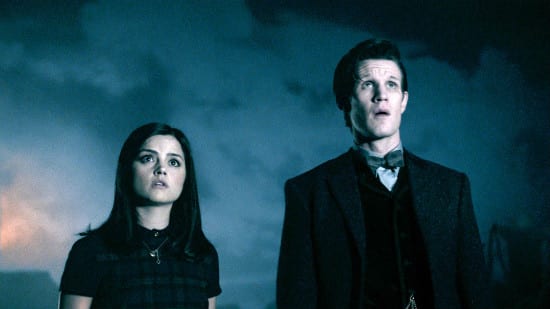 Clara (Jenna Louise-Coleman) and the Doctor (Matt Smith) look upon his tomb.

The season seven finale of Doctor Who exemplifies what it looks like when Steven Moffat goes on an odyssey up his own ass.

Or, in a more finely tuned manner of speaking, it’s what happens when Moffat is allowed to pen the episode and ends up with a scotch taped and glued together narrative and an arrogance that believes it can rewrite not only episodic canonical lore of the last five years, but the last fifty.

This isn’t just the season finale, it isn’t just the long awaited episode that was supposed to answer the fans’ numerous questions, but it was also the last episode before the 50th anniversary episode that months in advanced is already being wildly hyped up by Moffat and the media alike.

And if this is the predecessor to Moffat’s big plans and big ideas, then quite frankly as a fan I’m nervous of the havoc his ego could wreak on such a monumental episode in television and science fiction history.

Before the credits, we’re granted a scene that while it isn’t necessarily awe-inspiring, is at the very least sweetly nostalgic for Who fans. We see Clara, the impossible girl, floating through time and space and CGI’d golden mist as she continuously manages to save the Doctor from bouts of bad luck or terror. And there are plenty, but sadly he cannot see her and she can’t figure out where or who she is. All she knows is that her purpose is to always save the Doctor.

The episode starts on a note that signifies the recurring theme of disappointment throughout the episode’s runtime. We’re met up again with this season’s favorite trio: the green lady, her lover and the human peanut, and we’re supposed to enjoy them

Well, I don’t. They’re eating up my screentime.

They’ve called upon a meeting when they realize that the Doctor’s livelihood is at stake and need to call two more people: the women. One is Clara, the other River.

And of course the two when beckoned share a brief moment of awkwardness in the other’s presence, both believing that the other is too close with the Doctor.

Because hey, how could two women get along with their emotional sensibilities and easy rise to jealousy?

They soon realize that something has gone wrong with Jenny seemingly being murdered by members of the Great Intelligence. The others are kidnapped, all but River and Clara, the latter who wakes up to the Doctor there, unaware of the dangers that lie ahead.

Matt Smith’s facial tics here are wonderful to watch play out and it’s easy to assume that you’ve missed a subtlety in only viewing it once. Clara repeats what she’s heard at the meeting and the name of the planet where the Doctor learns his darkest secret is held.

Smith does much with the little he’s given and this is one of the many instances where his acting can manage to elevate the poorly written premise. It’s problematic when the actor is forced to distract the viewers from plot holes but Smith is always reliable and manages to produce heart and warmth in an episode that for the most part left me cold. When Clara and him travel to the planet and he mourns his predestined death and laments the lack of a peaceful end, it’s shockingly morose and we as the audience, long fans of the character, find it hard to believe that such a being could in fact meet his end.

However, the moments of depth are short lived and soon we’re trespassing into the tomb of the Doctor, the TARDIS blown to the sky, where database River is linked mentally with Clara to help the Doctor and her quietly. I love River, I love how Alex Kingston plays her, and I do not like it when Moffat writes for her.

Here’s the gist of what goes down: the Doctor sees his friends under threat and so does River, River says the Doctor’s name to open his crypt where we find the energy of all of his time streams in the midst of a broken down TARDIS. The Great Intelligence jumps into the stream to scatter his soul amongst millions and millions of moments so that he can turn every single one of the Doctor’s victories into a failure, so that he can ruin the lives he’s saved and so forth. This causes the Doctor to crumple in agony as all of his past lives die at once, his body in shock. Clara having realized earlier that she remembers the Doctor telling her he’d met her twice before in other lives, realizes she too must jump into the stream as well. However in her case, she’ll be constantly chasing after the Doctors to save him. She’s the impossible girl and all she has to say to the Doctor is:

“Run you clever boy, and remember me.” Sentimental and played wonderfully by Jenna Louise-Coleman, however the abrupt fix to the issue at hand almost manages to negate a moment we’ve been waiting for the entire season.

The Doctor tells River he sees her and they say goodbye in a way the promises a future, Kingston and Smith displaying with ease their chemistry and the Doctor then, because three’s a party, ALSO jumps into his time stream and saves Clara.

This has to break every rule of paradoxes ever but Moffat only likes his timey wimey accuracy when it befits him as a writer.

The Doctor finds her, traumatized and alone and fearing that he is simply a memory. He convinces her, saying that after all of the times she’s saved him, let him save her just this once.

Just as they’re about to get to safety they see a lone figure standing in the dust and rubble, and the Doctor tells Clara with regret that it’s him, but a less than favorable version. A version who will forgo the title of Doctor for his own means, leaving bitter memories in his wake.

He’s the Doctor, played by John Hurt, and he’s come into play conveniently with no preamble just in time for the 50th anniversary.

I am massively agitated by the episode not necessarily because it was flat out bad: although I believe I could make a decent argument that that was the case. No, the annoyance lies in every singular moment that could have been amazing and shocking but instead was dull and oversaturated with an uppity air that lends one to believe that Moffat truly believes he surprised us.

From interwebs rumblings most fans had guessed not only the Clara subplot but also the John Hurt twist. Fans are difficult to trick these days.

Matt Smith and Jenna Louise-Coleman are such beautifully intricate performers that it’s easy to forget the numerous negatives about this episode but here’s a few off the top of my head:

1. The unnecessary character moments with Strax, Jenny and Madame Vastra. We don’t care about them. There is nothing in me despite well-timed exposition about how they’d helped the Doctor after the dark ages (right after Amy and Rory died) that makes me believe that these three are some of the closest friends he has in the universe. Just because we’ve seen their faces a number of times doesn’t mean I’m sold.

2. The rapid pace of Clara’s storyline that manages to take away any emotional impact. She sacrificed herself and was saved five minutes later. There was zero stakes involved, no stress, no will she or won’t she survive. It was predictable.

3. The notion that spectacle equates good. Sure Who fans love a good show of things, the big and the bad and the magical, but it’s the emotional tug that allows the show to subvert it’s genre and make it so compelling. I love the makeup and the costumes but Moffat’s idea that we’ve all been anxiously sitting on the edge of our seats awaiting the name of the Doctor is absurd. We’ve gone decades without knowing, I’m in no rush to figure it out now.

4. The sweet moments were rushed in order to keep a convoluted plot moving. We saw the Doctor’s pain, regret, fury and acceptance over his fate in mere seconds and while it was wonderful, it also would have been nice to allow the moment to be explored. To add a sense of serenity and complexity that would make the following adventure all the more exciting. Sometime the calm before the storm is necessary. Anything to do with River was given the offhand treatment even though at this point in the Doctor’s timeline, River is already in the library. The moment where the Doctor says that it isn’t his name the matters but the name he chose for himself—the Doctor—that holds significance.

I love this show, I love Matt Smith and think he has a brilliant acting career ahead of him, but I’m sick of the disappointing finales this show has turned in the past two seasons because of the creator’s belief that they’ve  managed to create an idea so clever that it outweighs the narrative and historical context of the show.

I hope the 50th anniversary is brilliant, I hope season eight impresses me and they sign Neil Cross on to write more episodes considering he and Smith are the MVPs of the season. I hope I’m excited when I begin to see promos in the fall.

As of now, I’m disappointed because lackluster is never the term you want to apply to a show that promises so much more.