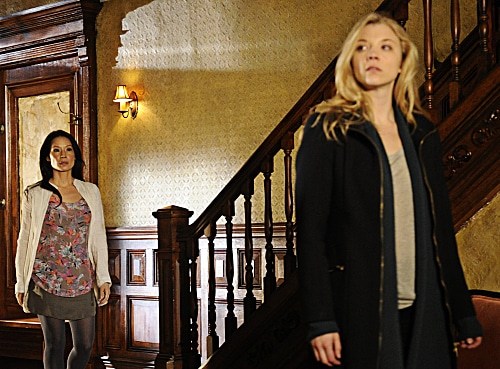 Irene Adler was the woman who beat Sherlock Holmes.

And it turns out that Joan Watson was the one to save him.

I don’t believe I could be happier with a finale.

Sherlock believes he has his old Irene back but it’s soon clear that she is a mere fragment of what she once was, plagued by PTSD after a year and a half of being held captive by a mystery man, a man Sherlock wholeheartedly believes to be Moriarty.

Despite this he chooses to remove him from the case, believing his judgment to be clouded and that he would be better suited to be helping Irene adjust, believing that her fate was his fault and his alone.

So, Watson is on this case alone.

This episode also dedicates a portion of its time as flashbacks to how Irene and Sherlock first met and the intrigue that would draw such personalities together. She was witty and smarter than he anticipated and he was an enigma to her, constantly surprising and neither of them found each other bored in the others presence.

They flirt a romance, they  fall hard for one another and then one day, after they’ve grown so close, Sherlock finds what appears to be a pool of Irene’s blood in the middle of his apartment.

Which makes the ultimate deception all the more heartbreaking.

Natalie Dormer (Game of Thrones) and Jonny Lee Miller share a wonderful chemistry that makes this romance so ultimately tragic. While it was nice to see Miller play love struck and for Dormer to tout out an impressive American accent, what was more interesting was to watch their mutual self-destruction in each other’s presence. Sherlock drops everything to help her as a means of penance and of love. She’s playing mind games to try and force him to leave with her.

It even manages to make Sherlock pause his and Watson’s partnership as he tells her he’s leaving to be with Irene but Watson sees this as playing straight into Moriarty’s hands, running and hiding and consistently playing into the chase.

All of this comes to a crashing halt when a birth mark of all things makes Sherlock believe that Irene isn’t telling him the whole truth. In yet another powerful scene from Miller, Sherlock grabs her and demands her to tell him the truth but she says that it’s just his mind playing tricks on him again, that his gift is also his curse and that when he wants answers too badly his mind may place them there despite the legitimacy behind them.

Irene is furious and storms out and that’s when the clues fall into place.

A man after Irene and Sherlock walks into Sherlock’s apartment and manages to get one shot fired in him before he’s shot and killed. By who?

We all knew that Irene wasn’t going to be entirely what she seemed but I’m sure plenty didn’t expect Moriarty. There were suspicions of hallucinations, twin sisters, and scorned woman trope where she joins Moriarty to hurt Sherlock for hurting her, etc.

The shock when she walks through the door holding a gun after just killing a man with her American accent dropped is truly deserved. What a brilliant character.

There a number of reasons why this character worked. She was calculating, she wasn’t petty, she wasn’t “fridged” (a term for when a female character is killed off for no other purpose than to create man pain), she wasn’t trying to seek revenge as a jilted lover, she was played beautifully by Natalie Dormer and she ultimately won.

Too bad Joan was there to beat her when Sherlock was too wrapped up in his own head space to think clearly. Sherlock has been shot, is refusing pain medication and is this close to flying off the handle and Joan can spot the potential relapse a mile away. So she takes things into her own hands when she gets an impromptu invite to lunch by Moriarty herself.

They sit and they goad and Irene realizes that Joan isn’t afraid of her and Joan says she’s too angry to be. And man, when they allow Lucy Liu to exude that silent ferocity of hers it’s damn captivating. She’s putting on a show just like Moriarty is now, smiling and taking it in and listening to her threats all the while devising her own plan of action, all the while calculating a plan of action on how to take her down.

Moriarty likened herself to Sherlock, saying they’re too similar to stay apart and that there’s a reason for their mutual attraction. However, her lust for power and his curiosity are on much different scales. It’s Watson who most closely resembles Sherlock. A brief glance would tell you that the former is the closer option, with the two of them being absurdly calculating and able to sense the other’s need for control over aspects of their lives. They’re both addicts in their own way whether it be in knowledge, wealth or drugs, they’re personalities are drawn to the bold. Yet Watson and Sherlock share the need and the want to help, to allow a story to unfold, to allow the innocent to walk that way for another day to come.

Moriarty doesn’t quite feel the same.

So during Sherlock’s tipping point when Joan begins to see that he could lose everything he’s gained she tells him to stop the game, to put his pride on hold and to lose. Let Moriarty win.

And so he does in a grand display of theater. He fakes an overdose and is rushed to the hospital where Irene visits because despite herself she can’t help but be drawn to this man who has confounded her, royally screwed up her plans and along the process has managed to stick.

Needless to say the plan goes accordingly and she’s taken away as Sherlock tells her that there are now two people in the world who can surprise the two of them and that’s Watson.

The last scene shows our duo on the top of their apartment and Sherlock is telling Watson of a new breed of bee he’s found in his hive and she realizes in an oddly sweet scene that he’s named it after her.

As opposed to the start of the season where beekeeping seemed to be more of an annoyance to Watson than anything else, this time she looks on happy and joins him to watch the progression of the bees start to life.

This is the note to end on with our pair of consultant detectives together with a friendship that has grown exponentially. It’s telling that Sherlock would name something so precious to him after her, especially considering the idea that it’s a new breed just as Watson is a new “breed” of person to him. He’s had family that he’s held with disdain, acquaintances that have been a means to an end, and a woman who’s utterly destroyed him, and now he has someone who is simply and genuinely a friend.

A constant theme throughout the entirety of the episode is this notion that Sherlock is a broken being, a man who’s lost much, loved little, and has seen the one person he held dearest torn from him only to be returned in the form of a sinister shape shifter. And for once I don’t see it. There have been moments of vulnerability in the first season that have suggested a broken Sherlock, a sad Sherlock, one who’s tired of his game. But never has there been a defeated Sherlock in the way that Moriarty is trying to sell us. Because Sherlock didn’t win Moriarty sees it to herself to reassemble the puzzle of the man to create an illusion of the past man all the while attempting to put his pieces back together just so, so that he will be everything she needs him to be. With the needle in his arm she sees something beautiful.

Something she can manipulate.

Watson on the other hand never lost hope in Sherlock. She didn’t waiver in her caution to allow him to pursue the case, a luxury Captain Gregson was all too happy to take away. She doesn’t see vulnerability as a means of weakness but instead with Sherlock she sees someone entirely human, entirely breakable, but also someone with some fight in him. He’s isn’t hopeless and without guide and he has her by his side.

This is why I think this show is such a wonderful piece of work. They’ve taken twenty-four episodes worth of time and managed to sink our characters to their lowest of the lows, bond the characters together all the while creating an interest between audience and character, and even managed to bring a woman back from the dead and throughout all of that there were some surprises to be had.

Even after the entire season I’m still seeing multiples of other critics comparing this show to BBC’s Sherlock and writing about how while Elementary impressed, it still hasn’t reached the former’s quality. Which is a shame where I believe that other shows should be taking a keen notice in what Elementary is doing and following suit. While they’re not always top notch at creating cases that work in a systematic way, they always convince me that the characters are truly developing a friendship, they manage to not subject the female characters and/or violence that exploit female sexuality as a means of ratings or shock value, and they’ve managed to engage with an audience that so closely follows the origins.

I have many things I could say about the season finale but the one that truly sticks is the idea that Holmes is human. He is not a robotic fixture, he isn’t closed off and alone and he doesn’t know how to turn off the feelings and emotions that ravage him: his humility, his Watson and his warmth make for such a compelling trio that it’s difficult to accept that we have to wait throughout the entire summer to meet up with them again and to see what game is afoot this time.