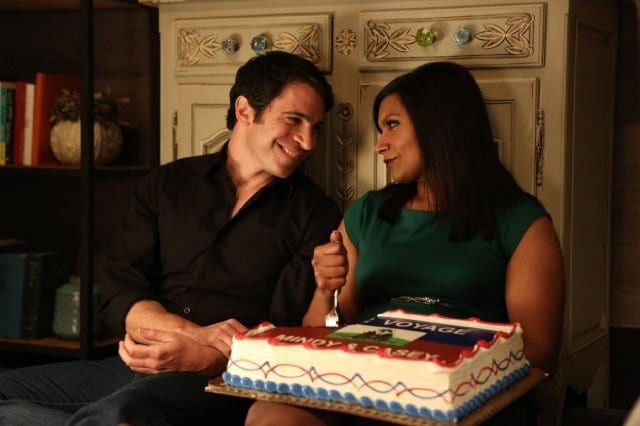 Mindy and Danny share a moment at her goodbye party

Well, here we are, at the season finale. If you told me at the start that I would be emotionally invested in this whole Danny and Mindy thing that is happening but also not happening, I would have laughed at you. But the fact is that I absolutely am, and I kind of hate myself for sitting on the edge of my seat throughout that entire last scene.

The timeframes are notoriously unclear in this show, but considering we open on Casey and Mindy test driving Skype sex for while he’s in Haiti, we’re picking up pretty much where we left off last week. This was another great cold open, by the way; I’m totally down for seeing more awkward-instead-of-sexy moments in Casey and Mindy’s relationship. I like how it’s still doing the whole twist on the romantic comedy moments that the show started with but without the obvious and obnoxious voiceover.

Mindy decides to go to Haiti with Casey in lieu of the long distance relationship option and when she tells Danny, he immediately informs her that it’s a bad idea. Which of course it is, because Mindy is so not the mission trip to Haiti kind of person. It’s fine, most of us aren’t, and I like that about her.

There’s a throwaway scene that establishes the badass near-end montage of Mindy, Danny, and Jeremy all scrubbing up to deliver triplets but nobody cares at all about this patient because this finale is about relationships. I hope next season they finally figure out how to balance the ensemble part of their workplace ensemble cast because I would love to see the non-doctors get some storylines. Remember that one time we met Betsy’s family? She should get to be a real person like that again.

Speaking of the office, we do get a scene of them in the breakroom taking bets on how long Mindy will last in Haiti. Offended, she immediately adds herself and Casey to Danny and Christina’s camping trip so she can prove herself. Somehow Morgan ends up coming along as well, and the five of them pile in Danny’s car to spend the weekend in the woods.

Mindy makes an off-color and possibly offensive comment about being the kind of person that gypsies get vendettas against while they’re discussing voodoo in the car. Morgan and Casey at least maintain some political correctness in saying that voodoo is a cultural practice in Haiti and not the horribly stereotypical spooky dark magic thing. I know that making relatively insensitive remarks is part and parcel of Mindy’s character, but the point is that maybe it doesn’t need to be said at all? I don’t know, most of the jokes on this show are funny but every once in a while we get a line like this that just doesn’t sit well with me.

Anyway, Danny turns out to not be such a camper; he’s jumpy and falls right off his log when Morgan tells a scary campfire story. For all his talk about “being a real man” all the time, it’s funny that he’s so not into any aspect of camping, it being so rugged and masculine and outdoorsy and all. He ends up asking Christina to move in with him by asking her to camp out permanently in his apartment and damn it, Chris Messina is so cute with his nervous hesitation in asking her. I hate that I’m so invested in Danny, I really do, since I’m pretty sure I swore to dislike him in the pilot episode.

Over in the other couple’s tent, Mindy is praising herself for putting out that fire on Morgan’s jacket and she gets a taste of spending a year in a tent with Casey in Haiti. It is not a good taste: he flosses in bed and gets food shrapnel in her eye, he laughs out loud as he reads in bed, and he knocks her glasses off with his junk when he stands up to leave the tent. He thinks Haiti will be great, but Mindy is clearly having second thoughts.

These misgivings are confirmed when her and Casey’s farewell party scene opens on her confessing to God that she’s not going to Haiti. I love how she’s so very Are You There, God? It’s Me, Margaret about praying the couple of times she’s done it onscreen, and I love how much religion has been downplayed as an issue between her and Casey. They’ve got the contrasting religious backgrounds thing out of the way when he was introduced, and now they’re just a couple. A couple who’s not 100% honest with each other at the moment, but whatever.

Brendan and Duncan interrupt her moment to wish her a good trip, and Duncan might be a little psychic, since he senses her hesitation the second he hugs her. I’m glad that one of the very few lines he’s gotten is used this way. While I hope the midwife brothers will barely be around next season since their arc feels really over, if they’re still a big presence I hope we get to hear more from Duncan. He seems like a pretty interesting character to explore, and now that the whole Brendan/Mindy thing is done there might be a chance to do that.

Jaime is also at the party, pretty much for no other reason than because B.J. Novak and Mindy Kaling are real life besties. He and Lucy have gotten engaged, and Mindy takes this opportunity to show Casey off to him to prove she’s found love as well. If love is a guy who shares his gum with you baby bird style, that is. I kind of miss the string of random guest star dates for Mindy—maybe when she and Casey inevitably flounder, we can get some of that back. And let’s face it, considering the premise of the show is the rom-com failure of Mindy’s life, there’s no way she and Casey end up happily ever after.

After Danny soaks up some glory from people admiring Christina’s half-naked portrait of him in the living room, he escapes to his bedroom where Mindy’s already hiding, eating the bon voyage cake. He was going to smoke a hidden cigarette but instead takes a seat with her on the floor to mutually freak out about their respective commitments.

Inspired by Danny’s fear of moving too fast with Christina, Mindy pulls Casey into the (thankfully off) shower for a chat of her own. She says she can’t move to Haiti without them being engaged thinking it will scare him off but it backfires when he then tries to propose in front of the whole party. She turns him down for both marriage and Haiti, and he leaves. Mindy’s about to make a similar emotional exit when they get the page to go deliver the triplets.

The montage parallels the one from the pilot with M.I.A.’s “Bad Girls” blaring over images of Mindy, Danny, and Jeremy all prepping for surgery. They deliver the babies safely and without any medical gore seen on our part, thank goodness. If you couldn’t tell by my reactions to the vomit jokes in the last couple episodes, I’m too squeamish for medical shows. I do love the callback to the pilot, and I always love seeing confident, capable, kickass Mindy.

After talking to the triplets’ mother, Mindy makes the decision to say yes to something, and runs to Casey’s apartment building. His neighbors answer her Romeo-esque calls from the sidewalk, and I particularly enjoy the woman who throws hangars at Mindy. Casey finally comes to his window and Mindy makes a heartfelt speech about wanting to be with him and wanting to go to Haiti with him. She reveals that she’s even cut her hair short the way he suggested, and I ignore the logistical issue of where she got a haircut at 3 AM in favor of enjoying the bit of role reversal going on here. Usually it’s the John Cusacks of the rom-com world standing outside their girlfriend’s window, and I like that Mindy’s the one making the Big Speech to Casey, who agrees with delight.

Now this is the scene that gave me all the emotional reactions. Mindy walks into the break room at work where Danny’s sitting alone and after some obligatory cracks about her new hairdo, he tells her he’s slowed things down with Christina. He leans in close to grab and clean her glasses and I am not normally attracted to Chris Messina but I am totally attracted to him in this moment, I’m not going to lie. He puts them back on gently and it looks very romantic (even though I can tell you from experience that someone else putting glasses on for you is neither easy nor sexy). Despite half the audience chanting “Kiss, kiss!” in their heads, and despite Danny leaning in for it, all hopes are dashed when Mindy announces she got back together with Casey and is going to Haiti. They settle back in their normal personal spaces and that’s it, it’s just over.

Damn the writers for giving Mindy and Danny such nice arcs of character development along the way. Now I’m all invested in them getting together. I’m sure it’ll happen eventually, somehow, but this tease for it was more than I was expecting tonight. I’m pleasantly surprised by this, however; it means the show did something right over the course of the season with these two. Now, if only this kind of development and investment could happen with all (or at least more of) the characters, this could be a really great show.

As it is, the season got progressively funnier as the writers found their groove, but it’s not “great” just yet. The timing still feels weird, and I swear at least two of these episodes were aired out of order, but the show definitely grew on me since the fall. I hope season two brings more well-rounded secondary characters, an improved balance between the office and the “real world,” and of course some closure on this whole final scene. What are your hopes for season two of The Mindy Project?

Favorite Lines from “Take Me With You”

Danny: “You called 911 when a butterfly got in your apartment.” Mindy: “I thought it was a colorful bat.”

Danny: “Only three women can pull off short hair like that: Audrey Hepburn, Halle Berry and Ellen DeGeneres.”