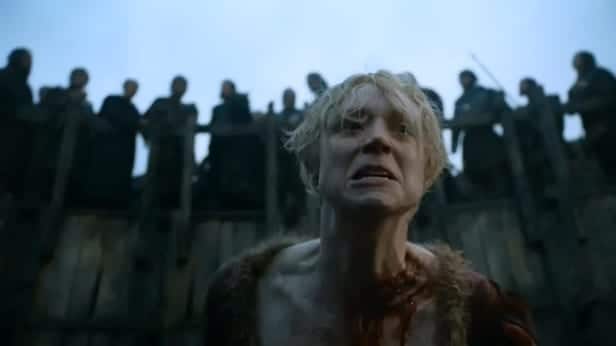 Brienne (Gwendoline Christie) must fight a bear for the entertainment of House Bolton.

I’m having difficulties believing that George R.R. Martin wrote this episode. He wrote last season’s best episode “Blackwater,” so the anticipation was high on my end. Rather than deliver on expectations he instead, sad to say, turned in a bit of a dud.

You’d think the man who wrote the books would manage to capture the essence of the characters on the show rather than taking up time with mindless pandering and exposition that lead nowhere.

There is plenty to enjoy about this episode, mainly its focus on chains and the breaking of them and the reminder that even characters in fantastical HBO dramas make hugely compromising decisions.

Daenerys continues to be the more progressively interesting character in regards to her plot, often times seeming like the only character who’s actually moving onwards rather than stuck in a stalemate, albeit well-acted stalemates. She plans to set 200,000 slaves free in yet another slaver city and manages to gain more gold, more power but also potentially a more threatening enemy for the first time this season. All of Dany’s stuff is proving to be highly interesting, relevant as well as helping us remember that Emilia Clarke is indeed a very talented actress as long as she’s not fed lines she’s supposed to shout such as every scene she was in in season two. However in this episode we’re given the dynamic of a girl who wants to be queen and plays the part expertly but here is still a girl making mistakes.

Arya is making her own decisions by finally leaving the Brotherhood after being deceived too many times and realizing that the Lord of Light has them more beholden in the faith in gold then faith in their God. However when running she’s captured by the Hound. This is a pairing that she should be decidedly interesting in the next episode, especially when you consider the way he acted around her sister Sansa.

Sansa is dealing with her grief about having to marry Tyrion instead of Loras and we realize the child she still is despite the mask she’s learned to wear in Kings Landing. Margaery tells Sansa that Tyrion is far from the worst Lannister, is handsome and has always been kind to her. But the real lesson is that as woman of their stature they must do what is right for the realm and they must quell their own disappointment. They must forgo the notion of love for duty. It’s a sobering realization for Sansa and while jokes are made about her innocence, here is a girl who in this moment may have lost what was left of it.

Tyrion on his end of things is dealing with it as best he can, doing damage control with Shae. Shae has become one of my most unlikely favorite characters and it’s hard not to feel for her when she’s telling Tyrion that they can run away together and be happy and in love. He tells her it’s not that easy and that beyond the castle walls there isn’t much place in the world for him. So he’ll be unhappy with his father for the marriage, but there’s nothing he can do about it but struggle on. She isn’t pleased and leaves, saying she can never be his lady but only his funny whore, which gives them a definite time limit.

In a brief but satisfying scene Tywin gives Joffery something just short of a tongue lashing when the former decides to throw a royal temper tantrum and tries to solidify his place above Tywin. Charles Dance is an expert at line delivery and it’s understandable why most of the kingdom would fear him.

Right outside of the city gates Melisandre and Gendry watch on and in yet another surprisingly but genuinely moving scene, Gendry is told his real lineage—his father was Robert Baratheon.

He says he’s nothing more than a bastard and she replies by saying she was born a slave. Their births do not dictate what lives that follow.

Jon and Ygritte once again have the sweetest scenes as well has the bulk of the screentime. George R.R. Martin seems to take a liking to the television version of Ygritte and explores her naivety as she’s taking in the world anew, on the southern side of the wall. The two tease and flirt until Jon tells her, in sincere concern for her well being, that the wildlings cannot win this war. That people beyond the wall have tried six times to invade and all attempts have failed and this time won’t be any different, they’re too scattered, too unorganized for a real fight. She won’t listen and puts him in his place, telling him that they will die maybe, but first they will live because she’s his and he’s hers. The two share immense chemistry and isn’t surprising that the focus is mainly shifted to them.

And how I’d rather that have been the case for more of the episode.

The problems that lie within this episode lie heavily on the necessity for this show to sometimes delve into unnecessary exposition, in unwarranted means, that detract rather than elevate the interest.

Let me saddle right on to my high horse for yet another segment of this reviewer not getting the oddly juxtaposing views on women, sexism, feminism and so forth on this show. I was nearly banging my head against a wall throughout the entire duration of the Robb and Talisa scene because while Robb Stark took little to no time in covering his body up Talisa’s rear end became a third character in the room for the amount of times we were given a tight shot, wide shot, zooming, rotating, whatever shot of it.

I understand! I get that nudity doesn’t equate misogyny, however, it clearly showcases that the writers believe that the audience is a male oriented one and one who would yes, enjoy shots of beautiful naked women. However, it’s excessive, it’s unnecessary and it’s becoming abundantly clear each time it happens that they believe the male gaze is in need of something to perk their interest. It’s like I’ve said before, lazy and showcases a lack of faith that the narrative’s material will hold the attention on its own.

As one of many female fans I’m going on the record as to say that the narrative is interesting enough on its own.

Sure, we learn she’s pregnant, that they really love each other, and that the war can be put off for sex just for one night, but it added nothing to the overall arc of the character.

The other point of interest in which gratuity runs rampant is every single thing to do with Theon’s character. It’s a complete waste of screentime that could have been dedicated to eliciting more of a reaction to Arya getting captured, to Sansa reeling with the effects of her impending nuptials. We understand at this point that his life sucks. We understand that there are horrors in this world that we as viewers/readers have only begun to dig up and we understand that all of this is some retribution for what Theon did as well as a reason for conflict among viewers who may have initially loathed the character, but would never have hoped for such a fate to befall him.

Theon in my mind is undoubtedly one of the most fascinating and well layered characters in the series.

That doesn’t mean I need to see his testicles cut off to feel his pain.

The scene in which I enjoyed immensely and found to be the least bit over the top was the one with Brienne fighting a bear with a wooden sword.

Jaime and Brienne are inarguably two of the most interesting and deeply faceted characters on the show. Both are conflicted by what they deem right and wrong but what they both similarly share is their persistent need to execute what they believe is right and wrong: no matter the outside opinions. So when Jaime promises Brienne that he’ll honor their oath to Catelyn that the Stark girls would be returned to her, her remark in calling him Ser Jaime—not Kingslayer—is all the more touching because it’s a companionship built on mutual, if hesitant respect. There’s no affection, no burgeoning lust, but rather two individuals who have been put through the ringer and despite their differences and opposing sides of the war, find that they fight for the same things when they really look at it.

This makes Jaime’s return all the more exciting and a pitch perfect end a lack luster episode on. Jaime has ridden out of camp when he learns that Harenhaal is keeping Brienne for their own entertainment after refusing her father’s payment for her. He rushes back saying he’s left something behind to see Brienne in a pit facing a bear, in her pink tattered dress, with nothing more than a wooden sword to ward the provoked animal off. Jaime realizes the injustice and despite his handicap jumps in for backup. He’s managed to provoke fear in one bannerman though and soon the two have aid out of fear of Tywin Lannister learning his son is dead. It’s fantastically climatic and a narrative turn in Brienne and Jaime’s storyline. Will they still fight and goad? Very likely, but now the respect is more on the surface than it is beneath.

Jaime and Brienne, Jon and Ygrette, those were the saving graces of the episode. There were other moments that that were effective but lead the storyline nowhere. There was even a scene with Bran but rather than actually explore his character arc, we instead were delivered a monologue by Osha for no apparent reason—especially since the audience already knows the dangers that lie beyond the wall. It wasn’t a bad episode and there were many highlights of the season (the bear pit) but it was a filler episode, too soon after another filler episode. I’m sure that the last three episodes of season three will be action packed but, will it be too late? I’m optimistic that it won’t be but hopefully the end of the season puts away Theon and the blood lust surrounding him and centers their eye on the core character moments of the show.

Again, not a complete failure of an episode, but it was forgettable.