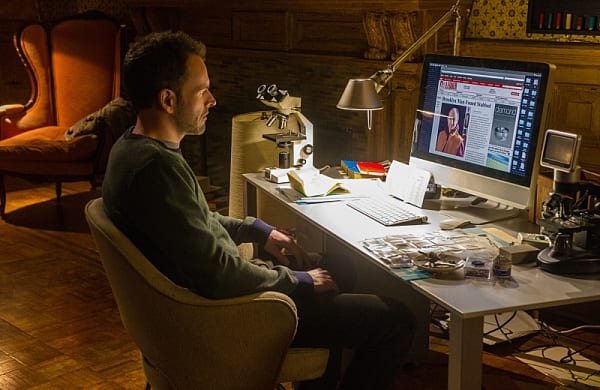 Sherlock (Jonny Lee Miller) must do Moriarty’s bidding to learn more about Irene.

The spider, the woman, and the rock: three individuals who define the name Sherlock, who over the decades of interpretations and milestones have come to represent the man of the iconic investigative skills, no matter their actual relevance.

The spider, Moriarty, is the one who holds the web together, sitting directly in the center waiting for flies to fly recklessly into his nest as he proceeds to roll them and twist them until they bend to his bidding. He’s the mastermind who controls the pieces of the barebones ideas. He calls Sherlock at the beginning of the episode, a continuation from the previous, where he asks him to do him a favor. He tells him that he had an employee, Wallace, who was killed some time ago and he’d like to know who did it.

Why should Sherlock help? Well, because once he’s gotten the perpetrators he gets to know the truth behind Irene’s murder. And BAM, Sherlock has flown head first into the web.

The idealist purpose of Moriarty and Holmes is to represent a duel headed coin, one that represents hope and one that represents madness. Here are two men presented with above average levels of intelligence, here are the means in which they conduct and manipulate their knowledge, and now, in which form will these men see fit to display their genius. Sherlock has taken the path of the righteous. He’s full of imperfections and he has his demons but he won’t allow them to define his talents. He will aid the individuals who seek justice for the victims and the ones who wish to persevere in cleaning the streets of vermin and monsters alike: including those like Moriarty. Moriarty rather than being a master of deduction is instead a master of secrets, of manipulation, of narrowing in on targets’ weaknesses. He tells Sherlock that he wouldn’t be too bad of an assassin himself which leads to the idea that if Sherlock were ever to go rouge, so to speak, with his intellect, his precision and need to focus on the minute details of a case, he could be one of the most dangerous men out there.

Luckily, he ended up on the right side but with how many reprehensible damages left due to the man on the other side of the phone?

Sherlock takes the case, he’ll find out who killed Wallace all for answers about Irene Adler.

It takes some time before her name is broached again. They find the company “Sutter Risk Management” where they believe they’ll find their priority suspect, Mr. Sutter, whose sister was killed by the Wallace in question years ago. Instead they’re left with false alibis and loose ends with Sherlock entirely convinced that Sutter is the murderer.

In the midst of this Watson asks Sherlock about Irene, what is it about this woman that is worth the risk of working with a known psychopath who likes to play with his prey before drawing the final blow.

Irene Adler was the woman for Sherlock. She’s eclipsed any other woman or notion of her gender, he was a man who had zero inclination for love, hadn’t believed in the concept yet fell hard and fast for Irene. She was beautiful, an artist, and had an earnest optimism in the human condition which rather than put Sherlock off, convinced him. He was able to see the good in people because of her.

And then she was taken from him and his faith dissolved.

Sherlock meets with Sutter about his belief that he murdered Wallace and while at first it seems that Sherlock may have followed a false path later we see Sutter turns himself in. But that isn’t the last of it. Moriarty calls later and tells him the case isn’t over because Wallace didn’t actually kill Sutter’s sister, he was unjustly killed.

The next morning after a night of trying to fit the pieces together Sherlock wakes Joan and falls into near hysterics when telling Joan of the absolute nothing he’s been able to discover while she’s slept. He wants to know how a man like Sutter could misplace the face of the man who killed his sister and Joan tells him that it was years ago and maybe Sutter didn’t get a good enough look. Sherlock tells her that it doesn’t make sense because the face that killed the one you loved, a loved one in general, isn’t one that leaves your memory any time soon.

And this is our clue that this isn’t just about Sutter’s sister. Sherlock walks away as he tells her to prepare for the day.

There’s a subplot in this week’s episode that involves Gregson trying to warn Joan away from Sherlock’s line of work and it comes to a head in this bathroom scene. Gregson has told Joan that while he respects what she’s been doing and praises the good work, he’s still worried because while Sherlock is probably the smartest man he’s ever met he’s also the most self-obsessed and won’t see the danger he’s putting her in, but Gregson can. Joan is sick of being told what she can and cannot do, and so she presses on.

Until she too comes to the realization that Sherlock may be walking straight into a regrettable confrontation. Initially, she dances around the issue. She asks him if he’s afraid and he says he’s not. Moriarty could have had the chance a number of times to kill him and hasn’t so obviously is getting some enjoyment out of their little game. But, she says, killing him isn’t the only way he can be hurt. And that’s when it clicks for Sherlock. He tells her that their line of work will always have dangers in store for them but,

“But know this, as far as Moriarty is concerned, I will never allow any harm to come to you. Not ever.”

She tells him that he cannot just promise a thing like that but, he says he just did. Is this foreshadowing some imminent injury to Joan’s well being? Is it a promise that signifies her growing significance in Sherlock’s world? Is it a healthy mix of the two? Either way it’s beautifully played by both actors involved and proves that the fixed driving point of the series is the slow burning, entirely satisfying, developing friendship between the two.

He tells her that they should split up with him going to Mr. Sutter and her going to Mrs. Sutter and it turns out her outing is all the more productive as the wife tells Joan that while she’s sad her husband is in prison she’s also glad he has peace.

She finds Sherlock at home coiled tightly on the break of snapping and in frustration he leaps from the table to violently push the board over. He apologizes profusely telling Joan that it’s been a trying couple of days.  And we’re in a framed setting here where Sherlock is in far too deep and cannot climb out quite yet.

So Joan finishes the case for him by discovering that it was Mrs. Sutter’s guiding hands that led Sutter to the murder, despite knowing it wasn’t the original murderer at all.

And she says she did it out of love.

Sherlock receives a call from Moriarty shortly after that delivers him an address so that if he wishes to seek out information he can and he does but tries to evade Watson’s accompaniment.

Too bad Watson has picked up her own tricks and followed him there, unhappy that he tried to leave her behind. She’s frustrated with people making her decisions for her. So yes, she might be nervous but that doesn’t mean that Sherlock can deem when it is and isn’t important to inform her of what’s going on. He tells her that it’s personal for him and she says she could say the same.

He tells her that he’s in too deep now, unable to see the puzzle from the outside in any longer considering he’s now a part of the puzzle.

And that’s why she’s there standing outside the imposing mansion that sits before them. She’s there because she knows him better than anyone else, seeing a version of a Sherlock that the audience sees as well. One that would say he’d protect her and say it with complete sincerity. She’s there because she’s his companion, his rock that keeps him steadfast. So they step through the gate.

The ending exemplifies why this show works and why it’s become my favorite show to look forward to each week. It was laced with tension, with emotional integrity and with some absolutely phenomenal acting by Jonny Lee Miller who is on my wish list for an Emmy nomination this year.

They tentatively walk into the ominous mansion that wails with classical music and step into each room that seems well lived-in. There are bits and pieces left here and there, an unkempt bed and of course the music that plays on that Sherlock continues to step towards until he finds a room decorated with easels, paint, portraits and landscapes and in the far corner the back of a woman’s head with long blonde hair.

Sherlock half collapses as Watson, Sherlock’s rock, grabs him to keep him upright as he sags into her and barely manages to whisper out the name that’s haunted his being for over a year, that’s been a ghost in his dreams that is no longer just a memory.

“Irene” he whispers at first, unable to speak clearly and when he does finally manage to speak her name she turns her head and we see the woman, Irene (played by Game of Thrones’ Natalie Dormer).

It’s a crucial scene in the season and series thus far. Irene has always been Sherlock’s Achilles heel and here she is after all of this time after a spiral into the lowest depths of despair, after a stint in rehab, a sober companion and rehabilitation into a life that nears normalcy. Now, the catalyst to his year of failures and successes shows her to never have been dead at all.

It’s a wonderfully crafted scene and again, Miller simply nails it. Watching his face crumple in realization gutted me and maybe I’m just a softie, but I’m sure I’m not so blinded to know that what he dealt there was a truly captivating moment of a character succumbing into his inner most vulnerability.

It’s a top form episode and it’s only promising more in next week’s season finale. Irene’s back, Moriarty is still at large and Watson is sticking by his side. The spider, the woman and the rock, who’s going to have the greatest and most lasting impression on Sherlock Holmes?

Referencing Moriarty as a spider is directly from the original story “The Final Problem” where Moriarty and Sherlock both seemingly fall to their death.