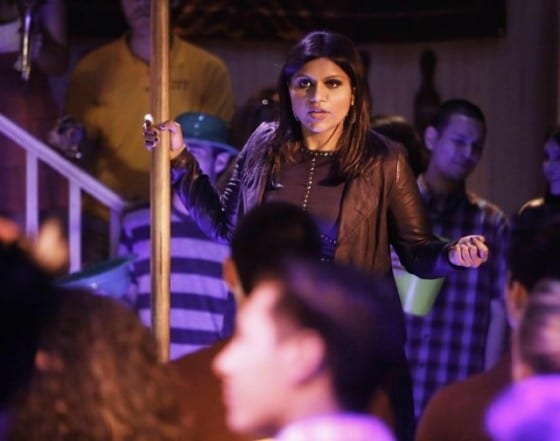 Mindy winds up at a frat party after breaking up with Casey.

The difference between the first episodes of The Mindy Project and this week’s penultimate episode is pretty remarkable. At first, I wasn’t the biggest fan of the show—everything felt weirdly paced and the jokes didn’t always land, but looking at it now that the season is almost over, the show has really grown on me. And “Frat Party” is a great example of where it’s gone, and how the characters have come into their own over the course of a season.

The cold open was one of the best so far, with Casey and Mindy illustrating all the non-sexy parts that go into showering together, including the final crash through the shower curtain. I know I didn’t like him from the start (because, let’s be real, he was kind of a jerk in his first episode), but it’s funny couple-centric sequences like this one that make me almost want them to stay together. Almost. I’ve pretty much hopped on the Danny/Mindy train at this point, I couldn’t help it.

In the office, everyone is still bemoaning the loss of Morgan because of his replacement, Tamra, who’s still singing most things she does and who hilariously calls Danny “girl” when she responds to him. Can they still keep her on staff even when Morgan is back? The Big News of the day is that Mindy has taken on a college student as a mentee, Katie (Francia Raisa) and will be proceeding to show her around the office and around her personal life for the day.

Mindy and Katie have lunch with Casey, who drops the bombshell that he’ll be leaving on his church’s yearlong service program in Haiti. He wants Mindy to wait for him, but she “doesn’t have a year to put on pause” so she breaks up with him then and there, in front of Katie and everything. Danny and Jeremy, meanwhile, have a breakup lunch of their own with Morgan (and the Deslauriers). They offer him a higher salary, but he turns it down for the sake of the brotherhood he feels with the midwives.

After Mindy has another lying-on-the-floor-in-despair episode, Katie drags her out with her to a no cups frat party. Mindy is very clearly out of place, but does her best to have a good time anyway, and there’s a great scene where she inadvertently pole dances while trying to get Katie to stop doing exactly that.

She ends up running into Tom (Bill Hader), the ex that started it all, whose life has collapsed so far that he spends his spare time being that creepy old guy at the frat parties. His wife left him after having a baby with her ex, he has no friends, and he’s gotten a terrible (and probably infected) eyebrow piercing.

Meanwhile, Jeremy and Danny show up at Morgan’s wind chime-adorned house to convince him to come back. They explain that they’ve been acting more like a family at their office now, and bring out the big guns in the form of an adorable puppy as a bribe. Morgan melts at the sight of the puppy, as did probably half the audience, and agrees to at least join them at the party where Mindy is to hang out.

They show up and have to pay the bouncer bro in order to get in, but they arrive just in time to help break up the fight going on between Casey and Tom. Why Casey was even at the frat party, much less dressed in an outfit that is half disheveled priest and half dorky guy at the beach, is beyond me. But I will ignore the plot holes for the sake of the hilarious physical fight between Anders Holm and Bill Hader.

Things eventually get rough for everyone; a frat bro antagonizes Jeremy, another one punches Morgan, and a third gets punched out by Danny, who’s defending his “brother” Morgan. Aww, how sweet. They all get the hell out of the frat party, and Morgan accepts their offer to return to the practice given the whole Danny calling him a brother thing. The office has been weird without Morgan these last few episodes (even though I enjoy Tamra), so I’m glad he’ll be back to balance the dynamic out again. Maybe with his family focus, we’ll start seeing the group together more outside of work and get to see people besides just Mindy and Danny interacting all the time.

Katie helps Mindy carry a semi-conscious and drawn-on Casey back to the apartment and they have a nice mushy moment about learning from each other all day. Casey vomits unexpectedly, and that’s the second time in two episodes that sudden puke has been a gag. I must say, as a sympathetically queasy person, I am not a fan.

The whole thing wraps up nicely in the elevator at Mindy’s office: Casey comes to see her to apologize and to try to get back together. He says he’s going now because later, when they’re married and she’s pregnant, he won’t be able to go. I never know what the time frame is from episode to episode, but does that kind of talk feel sudden to anyone else? Mindy seems to be into it, however, and they kiss and make up in the elevator. Morgan and Danny eventually get in the elevator and Morgan passes the time by taking group selfies as Mindy and Casey make out. That’s the Morgan I missed.

Given the upswing in quality this season has experienced, I’m really looking forward to next week’s finale. I’m hoping for at least one unexpected guest star, some resolution on where Danny and his ex stand, and for Morgan and Tamra to have a conversation. I know that last one probably won’t happen, but I feel like they’d be an interesting pair to watch interact.

Danny: “Morgan’s not a vegan, he puts ground beef on his oatmeal.”

Mindy: “Let’s go talk to the DJ and see if he’ll tell us the Wi-Fi password for this place.”

Casey: “I’m going to punch your teeth down your throat!” Tom: “I’m an orthodontist, I’ve got buckets of teeth!” Casey: “I’m a minister, you’re trying to kill a minister!” Jeremy: “Are we just yelling our jobs now?”