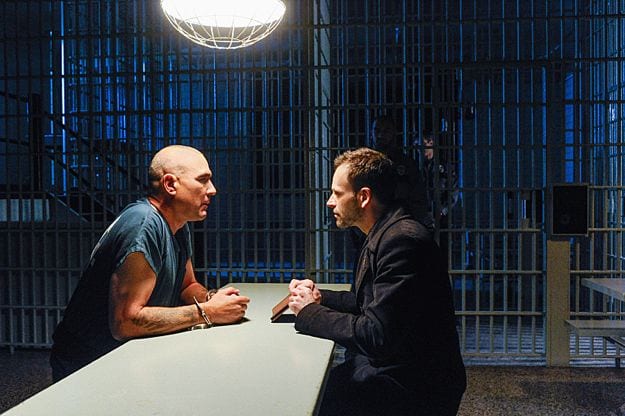 Where do I begin?

Here we go. The last four episodes of the season, or to be more precise, the last four hours. Next week there will be a new one hour episode and the following week will be the two hour finale and they’re without a doubt my most anticipated. Here begins the start of the reign of Moriarty, so here begins a serialization of the series we’ve yet to see prior, aside from character personality traits and motives.

There’s a lot to love about this episode. Namely, the fact that the case doesn’t get solved, something I’ve been hoping to see since the premiere episode.

I have no delusions about this show, I know that it’s necessary constraints are that of a crime procedural yet showrunner Rob Doherty has done wonderfully to demolish my preconceptions that I held out hope.

I’m really, very glad that I did.

The episode starts for the first time with two scenes that have no sight of Holmes or Watson.

The first of whom is a mysterious man who disposes of a man by forcing a heart attack on a man on a city board committee by using his pace maker. The second is a reintroduction to Vinnie Jones’s wonderful take on Moran, Moriarty’s assassin, whose presence in prison is domineering. He notices something on the news, however, that makes him take note.

We’re now with Holmes and Watson at their apartment. In a funny little bit Sherlock has managed to dislocate his shoulder while testing his ability and needs to put a call from Gregson on hold as he has Watson pop it back into place.

Quick note. It seems like any time Sherlock has a trick he’s working on at the beginning of the episode it will undoubtedly reappear in some form by the episode’s end. And it does I might add.

Gregson has called to let Sherlock know that Moran has information about past killings that he’d forgotten to mention and is willing to spill the details but only to Sherlock which sends him into a holding cell with Moran handcuffed to the table.

While there, Moran tells Sherlock that this man who died of a heart attack was in fact murdered by another under Moriarty’s supervision and he knows this because he was sent a picture of the man before Sherlock had interrupted him. Before he leaves he gives Sherlock an article of the case and tells him not to tell anyone of what went down there. Before Sherlock can respond Moran has managed to kill the officer who’d been watching them as a way to edge out any particularly intruding ears.

Sherlock immediately goes to Gregson to give a statement but only relays him half of the truth. Joan catches on and drags him into another room to demand honesty. She tells him that all of these weeks he’s been teaching her the skills of deduction so she can pick out when he’s lying. The last time she says that he acted like this he went on his own vendetta-fueled manhunt to torture and kill Moran.

To be fair Sherlock tells her, he was entirely honest with his intentions about that case.

He tells her than he has zero intent to go back that road and tells her that there’s something more to the heart attack death and that he wants to investigate it further before alerting the police.

The first step is breaking into the mortuary to perform an illicit autopsy on the murdered man to see what trigged the death since due to his pre-existing heart condition, there was no ordered autopsy.

This allows for a scene with great comic timing between the duo with Joan and subsequently, Lucy Liu, being given the most personality she’s been allowed to have in weeks. She, at first, wants no part in the operation until she realizes how poorly Sherlock’s handling it and takes the scalpel from his hands. They realize that the man’s pace maker had been used as a weapon, a way to electrocute him without stirring any suspicion.

This leads them all the way up to their second murder, an air conditioner dropped on the head of a man who’d gotten too close to the victims for the employer’s sake.

Sherlock is now more and more convinced that it could be a so called man Moriarty behind all of the wrong doings and, in order to stay one step ahead, he tells Joan that the two of them are going to have to think like killers, think strategically like Moriarty would, and discover who the next woman would be.

They come across a woman who was on the same committee board as the original man and decide to put in some good stalking time by tailing her to the park where she does a daily run and spot a bracelet on her wrist that implies allergies.

This alerts Sherlock’s attention and he comes across a hive of Africanized bees that have been cautiously set up so that they can be set off by a possible runner. It’s neat, precisely orchestrated, and would make the appearance that it was an accidental death.

So, in typical Sherlockian fashion, they decide to hold a stake out, in the park, surrounding a horde of angry killer bees.

Late into the night once the park is empty and they’re alone with Polish take out, Watson asks Sherlock again how she can trust that if they find this person and if they’re responsible for Irene’s death, how can she believe that he won’t stab another person in the stomach because of it?

He tells her it’s all pretty matter of fact. Before with Moran the only person he’d ever had in his life the he held to any sort of esteem was Irene and she was taken from him. At that point he’d believed Joan was about to leave for another client and again he’d be alone, so he’d have nothing left to lose. But then she stayed and her partnership, her friendship, became something that he cherished and something that had managed to anchor his resolve as much as possible.

“That’s the nicest thing someone’s ever said to me”, Joan tells Sherlock and Sherlock tries to brush the sentiment off but it’s an integral scene with Sherlock finally verbalizing his growing warmth towards her. He says,

And that’s that. Nothing is ever certain but the best one can hope for is change.

They spot the man near the bees and Sherlock forgoes pleasantries and tazes the man and brings him back to the apartment where, voila, he’s put into the straight jacket.

They tell the man (played by a solid F. Murray Abraham), whose name is Daniel Gottlieb, that he has two choices: tell them all he knows of his employer and they’ll keep him safe in prison, or tell them nothing and he’ll be unceremoniously tossed in.

He chooses the former but tells them they’ll be disappointed. He only met his employer once when he spot Daniel out of a crowd as a serial killer. SO they use his phone to text Moriarty and tell him to meet them. They’re beaten however by a train blocking their view and Sherlock uses a camera to capture photos of their faces in-between the train’s gaps.

Once pieced together Daniel tells them that he’s the man.

Sherlock stews on this for a bit, allowing Joan to help in background work until they realize that the man must have dozens of alias before she turns in for the night. But rather than waking in the morning to Sherlock once again rattling off about the day’s agenda she instead finds a note. It reads:

“Watson, I was closer to the truth than I let on. Off to see what I’d do when presented with a loaded syringe. My apologies for abandoning you as our drama approaches its climax.”

These are the character moments that sustain this show in such an impressive and beautiful fashion. Is he going without her to prove to him that he can or because he wants to protect her?

Sherlock is at the office of the suspected man and in the only truly disjointed moment of the episode, the man barely gets a word out edgewise before a target is painted on him and he’s shot dead. Sherlock panics for a moment, a rare emotion played, and realizes that the target is gone, he’s been let go.

He gives his statement to Gregson and finally passes the case and Daniel to him to deal with. Joan appears and for a moment when she sees her medical bag, panics but they realizes he’d only stuffed it with Legos to give it the appearance that something heavy and sinister lied within.

They’re no closer to solving the case when they receive a coded text from the employer. Sherlock brings it to Daniel who offers up no information so is forced to bring it to Moran. Moran obviously can read it but refuses and tells Sherlock to leave it.

So jump to one of the best ending cuts on the show that simultaneously shows Sherlock decoding the text and Moran attempting to kill himself by bashing his head against the mirror.

The text had been a threat to Moran’s sister: it was either her or him.

Sherlock is furious, realizing he was played into bringing Moran the message and setting him up for his own suicide.

That’s just when the phone rings and it’s Moriarty, telling Sherlock he believes they’re way overdue for a chat.

Moriarty is one of the central moving forces of Sherlock lore despite only appearing physically in one Sherlock Holmes story—“The Adventures of the Final Problem”—and mentioned in passing in another—“The Valley of Fear.” Despite this, the arch nemesis aspect is hard to pass up and has grown gradually more prominent with each reincarnation of the character. The Robert Downey Jr. films found Mad Men’s Jared Harris in the part, playing the calculated and cool headed equal to Downey’s Sherlock. BBC’s Sherlock found the hidden gem in Andrew Scott who played an unhinged and temperamental and most frighteningly of all, easily bored, version of Moriarty and was a defining part of the series. And now it’s Elementary’s turn and like so many other versions, its first job is to build the person up before revealing the man behind the curtain who has been pulling so many of the strings.

This episode works on many levels, but mainly because he didn’t solve it. He failed this episode and what a better way to humanize such an aloof character.

The quote “10:17! Thank you, Watson. You know, some people without possessing genius have remarkable knack for stimulating it” is almost a direct quote from “The Hound of the Baskervilles.”