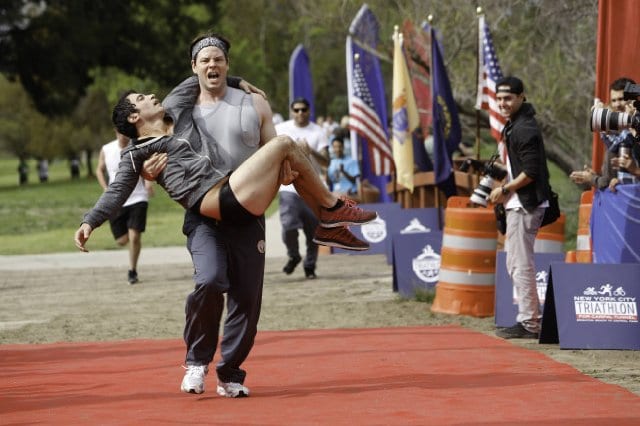 Fox peppering this season of The Mindy Project with all these mini-hiatuses is a pretty double-edged sword. On the one hand it makes these new episodes feel all the more awesome for those of us who watch it regularly, if only because it’s actually new for once, but on the other hand, it can’t be helping convert and keep new viewers.

“Triathlon” turned out to be more plot-arc heavy than I expected, and I am glad the episode started immediately after that cliffhanger ending from “Santa Fe.” Danny’s ex, Christina (Chloe Sevigny), is waiting for him in his office, here to see him after his infamous heartfelt letter. He reveals he wrote it years ago in the heat of the moment of the Beijing Olympics opening ceremonies, and confronts the office about who mailed it out. He assumes it was Mindy, but Morgan bravely owns up to his illicit mail activity and is promptly fired.

Morgan’s firing sets the rest of the plot in motion; with him gone, Mindy is taking his place in the triathlon the office is running. Her attempts at working out in the park with Casey are far too relevant to my own athletic life, I’m not ashamed to admit it. Casey takes this opportunity to mention to Mindy that if they were to be a more permanent couple, he’d like her to convert to Christianity. I’m so glad he realizes by the end that he shouldn’t have asked her to convert for him, because he shouldn’t have. There’s a nice way to ask a significant other to consider your personal beliefs and there’s a wrong way, and it’s great that the episode didn’t let Casey off the hook for doing it wrong. He was a pretty big tool in his first episode, but I have to admit, he’s grown on me, especially after he proved his maturity in apologizing to Mindy.

Back at the office, Morgan’s replacement Tamara is annoying everybody by singing everything she’s doing, and Danny’s annoying everyone by working out his emotional issues about Christina through trying to win the triathlon. All that grinds to a halt when Danny and Mindy—gasp—spot Morgan in the elevator all geared up to run the triathlon for the midwives, who have now hired him. I like the doctor/midwife rivalry, and after not seeing too much of that recently (beyond the Mindy/Brendan personal stuff) it was fun to see Danny and Brendan really duke it out at the triathlon.

Meanwhile, in the B-plot that probably should have been put into a different episode with fewer moving parts, Mindy hosts Betsey’s usual bible study at her place. Betsey’s usual guests are an interesting crowd, mostly biker-looking types who must live in her building. A props choice I really enjoyed was Mindy’s inclusion of two portraits of Jesus, one of the Westernized white Jesus and one of an ethnic Jesus.

Betsey gives Mindy a cross necklace afterwards, and Mindy goes into a theological tailspin when she tries to put it on. Though she’s apparently supposed to be at the race already, she takes the time to crash Casey’s Sunday School class to ask him clarifying questions about Christianity. At first he encourages her to share in front of the kids, but quickly regrets that when she admits to not wanting to convert. In fact, she inadvertently influences several kids to switch to Hinduism.

She makes it to the race in the nick of time and promptly throws up from overexertion. I understand that physical comedy really tends to work on this show (just look at Brendan stretching Danny out just before Mindy shows up), but Mindy puking twice didn’t sit well with me. I’m probably just queasy, but it came out of nowhere; I was definitely more surprised than amused.

The other two thirds of the race apparently went well; we only get a glimpse of Ed Weeks in full on Tour de France-style spandex and see none of his bike race, and the swimming portion consists mostly of Danny and Brendan antagonizing each other before and after. There’s a whole lot of Chris Messina wearing a Speedo, so the episode has that going for it.

Danny, the stubborn guy that he is, insists on taking over Mindy’s running portion of the race. In a callback to a brief conversation Mindy had with Christina earlier this episode, he takes Mindy’s hot pink running shoes and laces up to race Morgan head-to-head. Is it weird that Danny and Mindy have the same shoe size? I bet people who ship them hardcore find it adorable.

When Danny collapses (as I think we all predicted), Morgan turns away from the finish line to pick up and carry his former boss to the end. The two of them sit on a bench afterwards, where Danny genuinely thanks Morgan and offers him his job back. In a twist, that I admit I did not see coming, Morgan turns him down in favor of keeping his job with the midwives. How is that going to change things around the office? Is the dynamic going to work as well without Morgan? I don’t think so, to be honest, so hopefully the writers do what we all know they should do and bring Morgan back downstairs as soon as possible.

Like the Morgan plot, the rest of the episode doesn’t tie up as neatly as it usually does; Mindy and Casey reconcile and he apologizes for being a jerk, pressing her to convert, but there’s the lingering Brendan issue that doesn’t seem to be going away. Danny finally opens a letter from Christina now that Mindy delivered it to him and something affects him so much he calls her up for coffee. I feel like he might just be looking for closure; after all, she did cheat on him, he must want answers. Well, I hope he’s just looking for closure. I don’t think a rekindling of Danny and Christina is the best (or most in-character) choice to make right now.

Despite the typical bland title, “Triathlon” turned out to be a pretty good episode. There were a few problems with the pacing, but trying to jam too much into one episode has been a consistent issue for the show. At least there were significant developments made in three key relationships: Mindy/Casey, Danny/Christina, and Morgan and the rest of the office. There’s only a couple episodes left this season, so I hope The Mindy Project will finish out strong.

Jeremy to Christina: “Wow, I am geeking out, we have heard so little about you!”

Mindy to Betsey: “Okay, if I go to your apartment I think I’m just going to start feeling guilty about how little we pay you, so we should just do it at my place.”

Casey: “I had to tell them the Apostles were the original One Direction.”