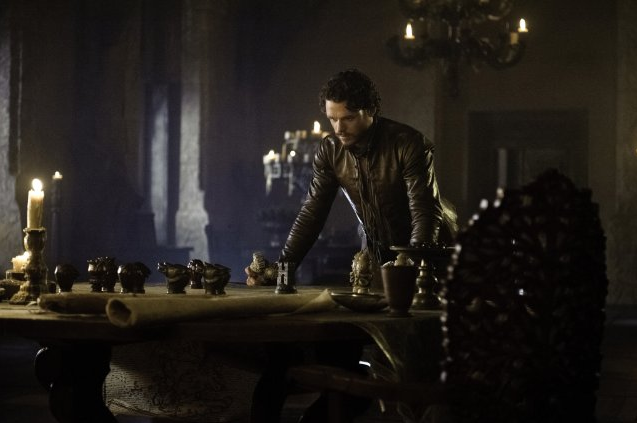 Robb (Richard Madden) plans his next move against the Lannisters.

Playing the game of Westeros is a dangerous and delicate balance. Honor doesn’t always persevere—it often times is to the detriment to good and honest men, and power of family blood doesn’t always dictate a well-rounded and joyful life. Anyone who lacks what the other has is constantly climbing a ladder. Cersei is a Lannister, but also a woman. Thus, she is a pawn. Robb is King of the North but has lost bannerman due to distrust and betrayal. Tyrion is a Lannister, the master of coin, but was born a dwarf and so he’s looked at with fear and disgust by his father who only wishes to have his other son Jaime back. Status doesn’t make one powerful, but what you do with it. If you’ve managed to obtain the most, made the right amount of friends with the right amount of money, power while not infinite, is large and full of opportunities which allows one to move the pieces where they see fit.

Jon and Ygrette share a simple, playful love. They run off together after trying to prove Jon’s loyalty to the Wildling crowd and into a cave where they have some alone time.

If you’ve read the books and are  fans of the original source material enough to actually retain information, the term “kissed by fire” just like “the Lannisters always pay their debts” and “winter is coming,” implies big things. Or, at the very least, sexy things involving the one and only Jon Snow.

And a Jon Snow who isn’t pouting and sulking about is a hell of a lot more interesting than the one we’re typically given.

It also proves interesting to see just how much effort Jon is going through to prove himself worthy. He’s honoring the Night’s Watch by upholding Halfhand’s last order to him to infiltrate their camp, yet he’s falling slowly for Ygrette, which was never a part of the plan.

Robb is facing his first true test of honor after a gruesome scene where members of the Karstarck clan go and murder the Lannister hostages as a means of vengeance.

Robb doesn’t see it that way; he sees two little and unarmed boys who were murdered by five men. Two defenseless boys, not unlike Bran and Rickon, who found themselves like so many others on the wrong side of the war at the wrong time. Richard Madden is electric in this scene and the wolf in the character is more than apparent as he all but growls his lines.

Despite Edmure, Catelyn and Talisa’s warnings, he sentences them to death. Four he hangs but the Lord Karstark he takes to himself. He’s not doing this out of anger or out of spite but out of a fool-hearted sense of honor. He even does the beheading himself like his father taught him, “the one who delivers the sentence must deal the blow.”

Yet look how Ned turned out.

It’s a decision that has lasting effects as the rest of the Karstark bannermen abandon them, no longer seeing the King of the North in Robb, but instead a failure to win the war. Browbeaten, he decides that their best attempt would be to take Casterly Rock, the Lannister home, and use the Freys (the family with whom had originally had an arranged marriage with) as a means to obtain more men.

He broke his vows, his duties, to the Freys out of love and it’s okay. The Karstarks murder out of grief and it’s not. While to the audience it’s clear that one is higher in terms of moral regard in this world where honoring your word could mean life or death, it’s a much thinner line.

Arya is learning the harsh realities that those you love or hold close to you often leave while the ones you hold with the harshest contempt continue to press on. The Hound and Beric Dondarrion fight and the scene is skillfully shot. It’s intense and claustrophobic and brutal. Rory McCann is wonderful at bringing a caged beast like quality to The Hound. There’s no grace but pure brute force. Couple this with the fire which has made him not only more desperate but also more rabid. The Hound seemingly kills Dondarrion, only for it to be revealed that Dondarrion, like Melisandre and Stannis, pray to the Lord of the Light who has managed to restore him to life each time he’s died (six, including this time). Yet, the Hound still won so he’s allowed to leave despite Arya’s fury.

This is mirrored with Gendry, in a softly heartbreaking scene, who tells her that he’s chosen to stay on and smith for the Brotherhood. He’s never gotten a choice in where he’s gone, never gotten to live as one whose allowed a directive that is all his own and with these brothers without banners he’s given a chance at a renewed life.

Arya tells him he’ll be killed all the same if the Lannisters find them but he shrugs it off, at least he’ll belong somewhere, have a family.

And Maisie Williams in a display of such raw talent says “I could be your family.”

“No, you couldn’t be my family, you’d be my lady.” The exchange is expertly played by both Williams and Joe Demspie and it makes me glad that they’re finally utilizing them, Williams especially, after several episodes with sparse material for them.

In King’s Landing, many a dealing is taking place. Littlefinger and his love for Catelyn is trying to convince Sansa that their escape is imminent (simultaneously though, he’s working for Cersei who wants to keep tabs on her as she’s the key to getting her brother back). Margaery is using her game of kindness to convince Sansa that a happy marriage between her and Loras is fast approaching. Both are far from the truth.

Throughout some wheeling and dealing (which involves a hilarious scene with Loras, one of Littlefinger’s male prostitutes and some of the best fast cuts I’ve seen—a humor rare on this show) Tywin has come to the conclusion that Cersei has been right all along and the Tyrells aren’t as well-intentioned as they seem. By marrying Loras and Sansa it would be handing them the key of the North to them and Tywin won’t allow that sort of power to land in any hands but his own.

So, he tells Tyrion, wedding bells will soon be ringing for him and the young Ms. Stark.

Tyrion is appalled and sees straight through the game they’re playing with him. Peter Dinklage hasn’t been given many note-worthy moments so far and this was a great introduction into them. Sansa has been forced to endure Joffery’s temperament for so long, and now is finally free. She sees a glimpse of happiness, and she’s forced into an unwanted marriage with Tyrion, another Lannister?

Not only is Tywin asserting his power, but he’s also playing games with Tyrion as well.

He’s a Lannister who must do what he’s told.

Cersei is in for bad luck as well as she’s delivered the blow that now she’ll be the one to marry Loras. She’s furious. She loves Jaime and as Tywin says this is a way to vanquish those nasty “rumors.” But more infuriating to her is the idea that once again she will be submitted to the will of a man who she holds no warmth for. She has never relished in her position of her sex like Margaery and Olenna have, but rather has withered on about what she can and cannot do. And now, she can’t marry who she wishes due to honoring the family name.

The scene that captures the eye and manages to grab on tight is the one, unsurprisingly, with Jaime and Brienne. Jaime has had his hand tended to under the protection of Lord Bolton and is weakened by the pain and days of malnourishment. He comes to the bathing room where Brienne is, alone in her tub, and joins her despite her protests. He goads her a bit before stepping too far out of line and at her indignation apologizes, genuinely.

He tells her he trusts her and sees in her face as she struggles to do the same.

And here in lies the conflict with Jaime Lannister, the Kingslayer, as he tells her. For years he says he’s seen these looks of conflict, a look of a struggle to justify trust in him after he murdered the Mad King. People are so quick to label him a traitor, a turn cloak, Kingslayer, yet won’t look at their own actions and what led him to what he did that would label him for life.

He stood by the Mad King’s side as he butchered and lit aflame an entire city, as Robert Baratheon’s rebellion rode ever near, and finally was pushed too far when he was told by an paranoid and unhinged Mad King to bring him Tywin’s, his father’s, head and to burn what was left of his people, may that be women, children or invalid.

So Jaime killed him, and in his mind justly so. He rid the county of a menace, of a parasite.

Yet no one saw it like that. No one saw the honor in killing a King, even Ned Stark who was rebelling against the man himself.

Nikolaj Coster-Waldau here is at his utmost best. He is playing a vulnerable Jaime, more so than the one from the previous episode, more so than the moment when he lost his hand. Here is a Jaime that is admitting to truths no one believes yet waiting to see if Brienne, a woman who lives and breathes and defines her life by honor, will believe him.

He passes out from the pain and the heat and as Brienne yells for someone to come and aid the Kingslayer, he corrects her and says his name is Jaime.

There are other moments, most noticeable a sweet scene between Shireen, Stannis’s forgotten daughter, and Davos who has been locked up for treason. She goes to cheer him up and begins to teach him how to read. It’s an introduction to a character that may or may not pop up more frequently throughout the season. And Dany, coming off of the best scene she’s ever had, tells the Unsullied to choose their leader. Grey Worm is his name and when Dany says to rid themselves of their slave names he keeps his as a token of the day he was set free.

It’s an episode of action. Everyone is now in forward movement. Secrets are being told, plans are being hatched, love is blossoming and death is coming with more frequent and brutal blows. Fire is encasing them all as all the characters begin to either succumb to the flame, praise the light or rise from the ashes.

Whether it is due to the duty they’ve sworn, the vows they’ve broken, or the words they cherish and hold dear, they’re motivated because of them.