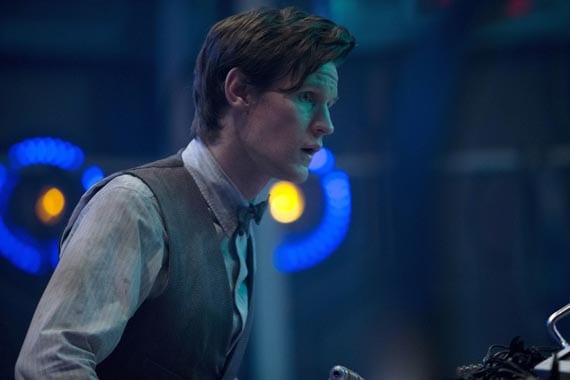 Clara and the Doctor are pulled in by a space waste control and Clara is locked inside as the Doctor meets the seemingly androids who caused the disturbance. Realizing Clara is missing he forces the androids to help him find her with the threat of exploding the TARDIS that he’s locked them all in.

This is the scarier version of the Doctor; the Doctor who does whatever it takes to preserve what and whom he believes is worth saving. Even though we later realize it was all a ruse, Matt Smith plays it convincingly so that audiences can’t see through it. The Doctor’s darker side and Smith’s ability to instantaneously switch from one version of the character to another is one of this Doctor Who run’s more interesting traits.

They set off, unknown to them that Clara has traveled deeper and deeper into the ship and is being trailed by a blurred creature.

The TARDIS has always been one of the more fascinating characters on Doctor Who. The Doctors change their faces and their bow ties, the companions swap in one for the other, red heads, blondes and brunettes, and the places and worlds they explore are constantly changing. Yet despite time, space and aliens galore, the TARDIS is the most pressing constant. Sure she gets a face lift here and there, but despite being the vessel to every new and wondrous site, the mere thought of her is consistent.

Which is why it’s so exciting when we get to see more of her.

The journey into the heart of the TARDIS teaches us more things than one, but one special item of note—which has to be pointed out to me via the interwebs—is the obvious sentimentality of the Doctor. He’s kept mementos for hundreds of years and not just the ones we’ve seen in recent years with Matt Smith or David Tennant’s versions. While Clara is exploring the studies and library of the Doctor she comes across a documentation of the War of the Time Lords, his name and artifacts of a lost civilization but more importantly she finds the odds and ends that have made the Doctor so enamored with the human race. There’s bits from fifty years ago, props that must’ve been dug up from the archives. Much of this credit must to go to writer Steve Thompson for managing to insert enough nostalgia for any Who fans who has followed it throughout the years.

It’s a treat for the die hards who’ve seen these pieces before and even more so when you realize the showrunners decided that rather than forgetting the people he’s lost and memories he has made, the Doctor has decided to keep all of them close to his heart: the TARDIS itself.

The shots and set pieces are innovative and gorgeous: swooping shots of never-ending halls, a swimming pool that seems straight out of a sci-fi film, a library that was taken from Beauty and the Beast. When this show decides to up its ante about production design, they really go for it and it helps create this miraculous structure that is tangible and yet unbelievable to watch.

However not everything is as it seems as there’s a creature haunting Clara’s every step, despite how far she runs.

The Doctor has realized that they’re in echoes of the TARDIS—a means to protect the ones onboard from the creature—due to a tear in the time frame. He finds Clara just in time but won’t tell her what the creatures are despite her terror. They run some more.

Along the way they’ve lost an android and as one of them get pinned by a falling beam, he learns that he’s been tricked into thinking he was an android because of his brother’s boredom.

It’s an arbitrary scene to a pointless subplot. It’s always nice to meet new people in their universe but not when it takes away from the main plot.

They end up trapped in the control panel where a dying star powers the time machine and it’s again a scene that speaks to the production team that dreamed this up.

However they’re cornered by those creatures and Clara’s had enough. If she’s going to die here she deserves the right to know by what.

The Doctor refuses to tell but she finds out anyway: it’s her. It’s Clara from a future time stream whose died, burnt to a crisp, in this very room. The Doctor apologizes, saying he brought her with him to keep her safe and it seems that he’s brought her to her death yet again.

They’re given a way out and for a moment believe they’re outside, free of the TARDIS and Clara is relieved until the Doctor tells her it’s simply a mechanism the TARDIS herself has put in place in means of protection. She’s disguising herself to keep her safe.

In the meantime the Doctor is going off the rails, bewildered by Clara and her nature of survival and for a moment we see yet again the unhinged Doctor who can’t believe what he’s seeing in front of him which angers him. He grabs Clara and demands to know who she is. Why has he seen her in the past? Why do their timelines keep intercrossing?

The Doctor’s frustration and barely contained anger is palpable and those emotions and Clara’s subsequent fear due to his hostility is well played by Matt Smith and Jenna Louise-Coleman. He’s told her some of his secrets now: that she’s a girl he’s been chasing through time, meeting up with now more than once, and having to watch her die because of or for him. But when she begins to fall backwards off the illusion of a cliff he panics and swoops on in, holding her and as they cling to one another. After that scare their anger and their fear is gone. He is just the Doctor and she is just Clara once more.

Might I add that these two have such strong chemistry that the line between platonic and burgeoning romance is beginning to blur. I don’t know if that was the plan of the writers or if the actors are simply too well matched.

The Doctor asks Clara to trust him just this one time, and to make a leap of faith with him into the console. He says that it must be there; this is just the way of the TARDIS protecting herself. So on the count of three they’re off and into what is now the wasteland of the heart of the TARDIS.

Silent and empty and blindly white, this is a TARDIS that is unlike anything we’ve seen. It’s on its last legs, its dying days and the Doctor is at a loss. For all of the times that his ship has swooped in to help him, take him where he needed to go, he hasn’t a clue what he can do to possibly save her.

The look on the Doctor’s face says it all—this time machine is all he has. He’s a mad man in a box, what is he supposed to do without it?

But then Clara grabs his hand and he sees the burn on her hand from earlier and realizes it was a way to help them out. But before he goes to right things, Clara needs to know—will she forget everything she’s learned? Will she forget about the Doctor knowing her past lives? Will she forget his name? She’s learned so much about him, gotten rid of some many secrets and now she will be losing them all.

Well, as the Doctor had said, secrets keep him safe.

He finds a crack in the timing and goes through it to pass the message back to himself on how to save the TARDIS.

Essentially, he pushes a reset button.

But the real ending isn’t.

The Doctor remembers everything that has happened, Time Lord and all, but Clara has forgotten but still feels the exhaustion her body has gone through. He needs to know that she feels safe. That she is okay traveling with him.

Of course, she says, all with bravado and Coleman’s effortless energy and charm.

He’s still not convinced and he wants her to prove it to him but she can’t, so she just tells him again. It’s a quieter scene compared to the adventure they’ve just gone on but it’s just as poignant, just as engaging to watch.

I won’t say that this show has gotten better in the past four episodes but there’s something undeniably different, which may largely be attributed to Jenna Louise-Coleman’s infectious energy and the chemistry between her and Smith, but whatever it is I want to continue. I’m none too excited about the whole Doctor’s name bit, since I’ve never particularly cared about this reveal, but I am interested in the Doctor and his relationship with Clara.

It was an episode of mystery and adventure and a Doctor who goes a little dark—everything I love about Smith’s run. Now what’s next?