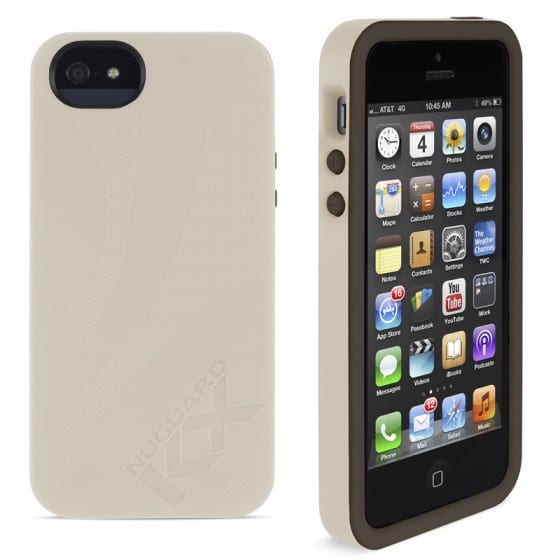 There are a wide variety of iPhone cases on the market. You have the sleek, stylish cases that will protect the phone from most scratches while letting you show some flair as you talk. You have the massive protective cases that will withstand the wrath of the elements while increasing the size of your phone three times over. Honest protection over looks has always been the battle when shopping for a case. NewerTech’s NuGuard KX is dancing in the middle of that line, laughing at both sides.

To start, the case will increase the size of your phone. Nothing massive, but you will have an extra half-inch of body to account for. To combat this, NewerTech has built the phone to have a fantastic texture. The back has a “swoosh” like design for the grip but the untreated areas feel extremely smooth. The sides feel much harder, with a brushed plastic, almost sandpaper texture. A perfect balance is struck by having your phone feel secure in your hand, while slipping comfortably in your pocket.

NewerTech is selling this case as being able to withstand a 200 foot drop. I know better than to test my phone to that claim, but that does not mean I didn’t smash it around a bit. Throw it against a wall, drop it on the sidewalk, “accidentally” let it slip out of your hands and down the stairs of the subway; the phone will still work. What NewerTech calls the X-Orbing technology does a great job of keeping the phone safe. When you press on the back, it feels slightly like jelly, giving the impression that there is some serious impact resistance. For the sides, the hard plastic keeps all the fragile buttons safe and in working order. I cannot vouch for the 200 foot drop test personally, but as far as standard damage a normal person can expect with their phone, the KX has you covered.

Available in 8 different colors, the NuGuard KX does an admirable job of standing out. However, I tested the Trooper (white with black trim) model for about a month and it got pretty dirty after a few weeks. It’s nothing I couldn’t get out without a spit shine, but the grips in particular do a good job of holding on to your dead skin cells. Keep in mind, I only tested the white model, so maybe other colors fare better under use. 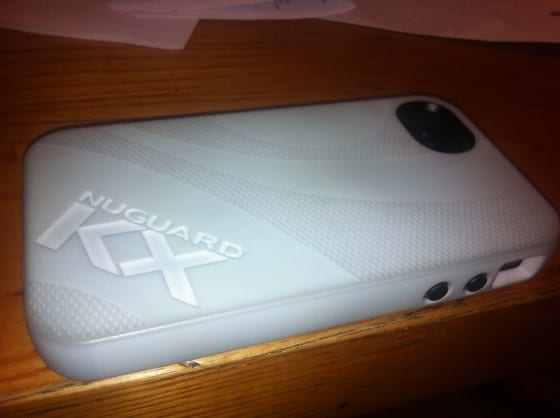 The case picks up a bit of dirt after only a few weeks.

Though all of the buttons are easily accessible, the vibrate/ringer switch on the side of the iPhone is much tougher to reach. Rather than quickly flicking it on and off with your nail in your pocket, the KX will require you to dig the tip of your finger into the side of the casing. First world problems, I know, but it does take a bit longer to end the embarrassment of getting a call in the movie theatre. Furthermore, the way the casing is built, the volume buttons are extra sensitive now, so keep that in mind if you are a runner that keeps their phone in their pocket.

Regardless of these flaws, the NuGuard KX is a fine iPhone case. Retailing for a mere $35 dollars, it gives you the best protection you can get without making your phone a hulking briefcase. The color variety is attractive, especially for such a strong case, and you will lose all fear of ever breaking your phone. If you live a slightly tougher than normal life but still like to keep your phone handy, you are not going wrong with the NuGuard KX.