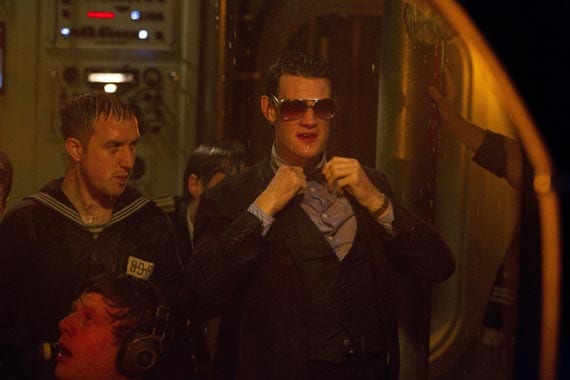 The Doctor (Matt Smith) arrives just in time to save a sinking submarine.

Underneath the frozen waters a Soviet submarine trudges on in the midst of the Cold War as a nasty little beast lies below.

Liam Cunningham guest stars as the ship’s captain, and is almost as good as he is as Davos Seaworth on Game Of Thrones but not quite, as the episode that pans out chooses style over substance, which is almost as cool.

The Doctor and Clara are misplaced by the TARDIS on this sinking ship just in time. A lowly sailor has freed the monster, the sub has sprung a leak, and events are beginning to spiral out of control.

The Doctor is about to devise a plan to save the crew when a larger leak appears, knocking them all over, and causing the TARDIS to disappear (which is explained later in a plot-appropriate history diversion type of way) and to leave the Doctor and Clara stranded on what appears to be a doomed
vessel.

Just as everything seems to have hit rock bottom, the alien from below arrives and the Doctor instantly recognizes him: he is an Ice Warrior from Mars, who has been adrift from his people for five thousand years with revenge on his mind. He is knocked out, despite the Doctor’s protests, and put in chains, locked up and away from anyone else.

The Doctor is angry. He tells them that before they have a possibility for peace and now they’ve made him an enemy. He was a hero on his planet, which makes him a threat to them. The Doctor and the Captain debate who will negotiate with him, both fearing their status will keep him from speaking.

That’s when Clara pipes up and offers herself. It’s going to become redundant the amount of praise I heap upon the characterization of Clara thus far. She is quickly turning into a wonderfully realized three-dimensional character who isn’t just charm and one liners—this upcoming scene demonstrating it beautifully.

She goes to speak to the Ice Warrior as the Doctor’s mouthpiece. She gathers that he’s lost all of his family, he cannot reach his people, and in a genuinely jarring scene (which I must imagine was even more so for the younger audiences) she learns that he’s cut himself out of his armor one of the biggest dishonors his people can perform. This means one thing: he’s desperate and has nothing left to lose which makes him all the more dangerous.

Because with nothing left to live for and running on rage and revenge, all he wants is to destroy as many lives as he possibly can. Considering the nuclear warfare in below decks this seems like a probable possibility.

Instantly, the Doctor is on top gear, he’s gotten Clara out of harm’s way—a Clara in shock and searching for the Doctor’s approval, he’s instructed the Captain to follow his orders, and he’s chasing after the warrior who’s escaped his shields.

They’re too late for two sailors who are killed as a means of investigation, the Ice Warrior wanting to discover the human body’s weaknesses and strengths and this is what causes Clara to pause and realize the true and completely real situation she’s gotten herself into.

The Ice Warrior manages to lure his armor back to him and enhances towards the trigger that will wreak havoc on society but before he does the Doctor threatens to blow the sub up before he presses the button.

Here is an alien, the Ice Warrior, displaced from his people, lonely and angry, who wishes nothing but to cause pain and anguish to rectify the wrongs that have been dealt to him.

Here is an alien, the Doctor, displaced from his people, oftentimes lonely and oftentimes angry, who would gladly sacrifice a few lives to better protect the lives of the many, despite the hindrances and the rash decisions and the violence he’s seen humanity demonstrate over the centuries.

One wants to destroy and the other wants to save and what makes them different? The Doctor’s been allowed more time to grow and learn from humans maybe, but really it seems like a simple comparison to the idea of war itself. Set in the Cold War, this week’s episode emphasizes on the fear of the end of the world, on the need to have the upper hand, and the desperation in trying to protect one’s society.

In the end, the Ice Warrior learns he hasn’t been abandoned and shows the Doctor mercy after all, allowing them to live as he’s carted off.

It would have been a an excellent episode had the pace not begun to drag ten minutes in. The problem was this: it was boring, and they didn’t know how to use the silly aspect of the makeup of the monster and turn it into a true storytelling device.

There’s an underlying theme of Doctor Who that’s persisted from the very start up until this week’s episode “Cold War” and that is the undeniable camp that goes into a show about a time traveling alien. No matter the situations that the Doctor and company find themselves in, rather it be picturesque tranquility or severely dire, there is an element of campy storytelling that accompanies it. Whether it be shown in the shoddily done effects, the make up for the aliens and monsters that recall early seasons of Buffy the Vampire Slayer, or the warm-hearted moments at the end when the characters laugh off the life-threatening situations with a well-timed quip. Camp isn’t bad, and Doctor Who excels at allowing it seep into a medium that tries desperately to distance itself from the attribute, believing it will cause detriment to the quality of the show, but camp done well is simply entertaining and Doctor Who knows how and when to use it expertly.

The problem, alas, isn’t with the dialogue, with the acting or even with the narrative itself (all three are actually pretty good), the problem is the pacing: it was just dull.

While the plot was consistently moving and the Ice Warrior was a fascinating turn on a villain, the episode written by Mark Gatiss, lacked the energy that last week’s episode held, propelling itself through some of the weaker moments. While I could admire the mystery, and the idea of creatures that hide in the dark and Clara’s admittance to herself that her life is at risk, traveling with the Doctor isn’t always a safe journey, and yes in fact, she is afraid, it was hard to focus on the positives when I was watching the clock.

This sadly to say is a trend with Gatiss-penned episodes. While he always manages to create the monsters that children would fear the most—the ones that inspire multiple checks in closets and under the beds—he just lacks the ability to create a trajectory that has a mounting tension and a fulfilling climax, it’s always a one-note momentum which is harmful in a sci-fi/fantasy genre program.

Luckily, this doesn’t derail the episode like it does the pacing. It’s a perfectly enjoyable episode, with a somber atmosphere that promises monsters and whispers that hasn’t been seen in quite a while—typically the threat is up and front and immediately known.

There are two important moments to take from this episode.

One: Clara’s fear. It  was tangible and it grew throughout the episode. At first she was high on an adrenaline rush, not realizing that the danger was real and that death was a possibility. Like the time traveling, the monster in the shadows seemed more like a fable, another great adventure, rather than an imminent harmful possibility. However, once she sees the mangled bodies of the two sailors, she stops and she waits; she waits for the Doctor to come back, for someone to tell her everything is going to be okay, for the nightmare to end and her easygoing sensibility to return to her. And it does, and she breathes in a moment of relief, never letting her doubts concern the Doctor, and gets on with it.

The second: the Doctor saying “this wasn’t a test Clara” after she goes and talks to the Ice Warrior. Why? Wasn’t it? While the Doctor puts on quite the show of wanting to keep his companions out of harm’s way, and Clara has proven to be quite the danger attractor, in the end isn’t he testing them, just a little? He’s testing their limits because in truth, do we believe that the Doctor would ever keep someone with him that frightened easily, that crumbled under pressure? No, he goes for the companions who are in control and seeking the thrill that his life can provide: Amy and River being the most recent examples. The difference between the three, because Clara is no less brave, is that Clara is cautious. She’s not going into this deal without understanding exactly what she’s getting into which is a fresh of breath air when it comes to female characters on this show. She isn’t willing to throw her life away for this mysterious man in a box.

A complex episode, mixed with very high highs, and very dull lows, but ultimately the episode you’d expect at this time in the season. The next episode seems to be full of thrills and ghosts that go boo, so hopefully next week’s momentum quickens so that we’re in for a ride.