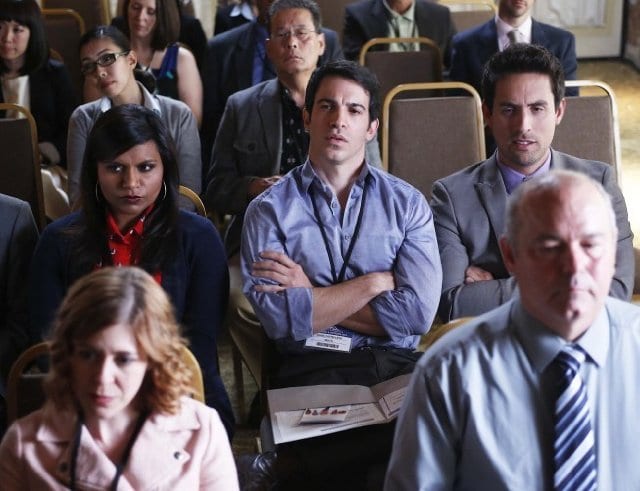 Sometimes, the planets just happen to align correctly and your shows seem like they’re listening to you. Okay, usually that means some kind of prophecy is being fulfilled, but in this case it’s the listening thing. We got to explore some of Morgan’s feelings of inferiority we learned about in “My Cool Christian Boyfriend,” we got to see said Christian boyfriend but in a small enough dose to be funny and not grating, and I think I officially ship Danny and Mindy. Shirtless Ed Weeks is really just an added bonus.

But I’m getting ahead of myself. The cold open was a thoroughly entertaining pillow talk exchange between Mindy and Casey the minister (Anders Holm, back again). I feel like this episode would make more sense directly following “My Cool Christian Boyfriend,” but again, still unclear whether this is a continuity problem or just Fox being Fox. Anyway, Mindy Kaling and Anders Holm have great comedic chemistry together, and if it meant more oddly specific hypothetical conversations about murder and vengeance, I would be okay with Casey sticking around.

At the office, Jeremy is practicing a rather dramatic presentation about “The Reed Method” that he’ll be giving at the convention the gang is going to in Santa Fe. Danny getting his knickers in a twist about the size of Mindy’s “carry-on” bag is interrupted at just the right moment by a call for Mindy from Josh. Having lured her onto the phone under the pretense of Lady Gaga, he attempts to get her to visit him while she’s in New Mexico so he can apologize for being such a d-bag. Mindy hangs up, but we all knew she was going to go anyway.

Casey shows up at the office to bring Mindy her garment bag for the two-day conference. Danny grumbles some more about her luggage like the prematurely elderly man that he is, and Mindy lets slip that she had been on the phone with her ex. Casey is surprisingly cool about it and actually urges her to go and get her closure. Then he makes a terrible pun about nuns and seductively recites that bible verse about the mustard seed to her and I thank my lucky stars that Morgan interrupts them to futz with the ice dispenser on the break room fridge. There is only so much “sexy” you can get out of New Testament parables.

On the plane, Danny is like .5 seconds away from being really sexist about the female pilots when he’s distracted by the spectacle of watching Mindy try to lift her oversized “carry-on” into the overhead compartment. He even prevents other people from helping her, but when Mindy is actually about to be crushed by her own suitcase, he finally steps in and assists. It’s not a shining moment for him as a person to be that guy making Mindy struggle with her luggage, but the slapstick of Mindy utterly failing to deal with her cumbersome suitcase totally makes up for it.

Partway through the flight, Mindy wakes Danny up to ask his advice about the Josh issue. He maintains that there’s no such thing as closure and tells her it’s a bad idea. When she sneaks out of the presentation later, he stops her at the car to repeat his case. Since she’s determined to go but had one mimosa earlier, he ends up driving her to see Josh.

Meanwhile, Jeremy is schmoozing up some other doctor at brunch but is derailed by Morgan’s appearance with a stolen meal from the charity for the disabled across the street. And that’s just strike one for Morgan: he’s too brusque in tone, and his peculiarities stand out in stark contrast to the doctors at the table. Jeremy tries to get him to leave subtly, and Morgan digs himself deeper by making his excuse for exiting a daily case of “screaming diarrhea.” Grossness aside, Morgan’s clearly aware that he’s embarrassed Jeremy and he’s upset about the way he’s being treated.

He makes his feelings known when he shows up to help Jeremy with the tech for his presentation rehearsal, and I am so glad that he does. He talks about a cellmate he had who used to be friends with him in the cell, but out in the prison yard he would make fun of him. Morgan doesn’t want to take that from Jeremy, he doesn’t want his face shoved in the nurse vs doctor divide, and so he leaves. Yes to all this character development he’s got going on right now – I’ve always wanted to see a more “real” side to Morgan, and now we finally get the chance.

Jeremy struggles through setting things up alone, and finds a congratulatory gift for himself in Morgan’s bag. He finally seems to realize he’s treated Morgan poorly, and finds him in the Navajo steam room he’d wanted to visit. I had forgotten about Morgan’s stomach tattoo until this moment, so I got a chuckle out of it all over again. Ed Weeks’s torso, on the other hand, is a distractingly abnormal shade of tan. Anyway, we get a slice of Jeremy backstory here: turns out he’s the family black sheep for studying and practicing medicine in America, so he and Morgan have the outcast thing in common and they depart the steam room as closer friends.

Meanwhile, Mindy and Danny arrive at Josh’s swanky… rehab facility. Danny occupies himself by ranting at patients about how their various addictions aren’t gritty enough or real enough to count. A lot of things can get written off as “in character,” which this attitude of Danny’s is, but I feel like it’s also important to acknowledge that it’s a seriously problematic attitude to have. I hope as Danny continues to grow and change over the course of the show, he starts to move past whatever complex is fueling this very old-school mindset he has about a lot of things.

Mindy finds Josh conversing with his ex-client, Clay Matthews, and I am so glad that Josh blatantly explains that Clay is a football player for the Packers because otherwise I would have been more lost than Mindy in this conversation. The bit where they were talking about Downton Abbey, though, that was a little more my speed.

Anyway, Josh starts in on his apology to Mindy, which starts out in a nice, mature place. It gets a bit derailed when he starts elaborating on his wrongdoings, which include stealing her prescription pad and cheating with not only Heather but also two other girls named Marisa and Ann. The knowledge that he was with Ann when he should have been driving Mindy home from a root canal sends her over the edge and she physically assaults him, shaking him around by his shoulders and yelling at him. I’m not saying he doesn’t deserve it, but it’s enough to get security called on her.

Josh tells her it wasn’t hard to hide all that stuff from her because she’s very good at ignoring things she doesn’t want to deal with. Hmm, that sounds an awful lot like possible foreshadowing. When she tells Josh her boyfriend suggested she come here, he automatically assumes she means Danny, an assumption not entirely disproven by Danny’s prompt appearance with a security guard behind him. Danny’s thrilled to find out Josh has an “actual” addiction to cocaine, and with that, the saga of Josh is (I hope) over.

They sneak back into the conference just in time to see Jeremy give his presentation. Or they would have, if Jeremy and Morgan hadn’t been so dehydrated by the steam room as to completely screw the whole thing up. Oh well, watching Jeremy chug a pitcher of water while Morgan threw himself at a projector screen was probably more entertaining than the actual presentation anyway.

On the plane ride home, Morgan is sleeping on Jeremy’s shoulder and you can almost hear the slash fic writers fire up their computers. Danny and Mindy are watching Life of Pi, though Danny refuses to watch with headphones. Mindy joins him in his headphoneless state, and when the plane hits some turbulence, Mindy instinctively grabs Danny’s hand. He holds it tighter when she goes to move it away, and a whole lot of something passes between the two of them before they let go.

It was inevitable that they were going to get together in some way, but now I’m actually hoping for it to happen. I would have said hell no to that idea back in the earliest episodes, but now I’m not ashamed to admit I want them to get together. But I don’t want it to be easy or cheap, and so the last-second plot twist of Danny’s ex-wife waiting for them at the office when they return was more than welcome. I hope next episode is Danny-centric, and we can finally get a glimpse of what happened in his failed marriage.

All told, this episode is definitely in my top five, and it’s been the most entertaining one in a while. The jokes landed, we got some bonus slapstick humor, and the two plots were very well-balanced. Ed Weeks and Ike Barinholtz finally got to step out of the shadowlands of secondary character-dom, and they rocked it. If there’s ever a buddy comedy about Jeremy and Morgan, I would watch it in a heartbeat.

Casey: “Why are you going to Hell?” Mindy: “I love gossip and I don’t really care about the environment.”

Danny: “I heard my name, was that a sweaty joke?”