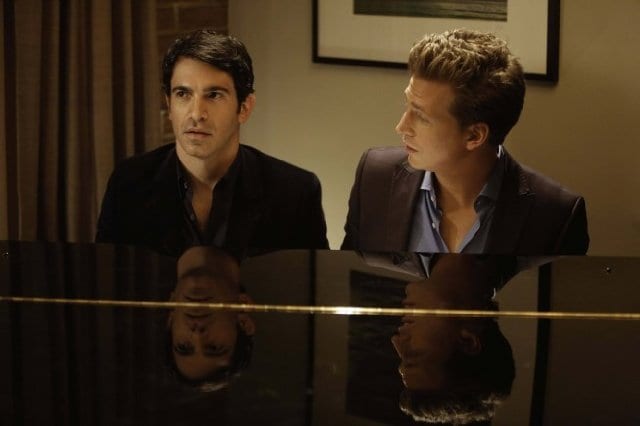 It was way more fun to watch Mindy date a male prostitute for a hot minute than to watch her go out with Casey the minister, and I’m trying not to think about what that might say about me as a person. But in all seriousness, this episode was paced better than “My Cool Christian Boyfriend,” more of the ensemble got the chance to have actual lines this time, and we got some great Danny moments (Wow, never thought I’d count that as a plus when this show started).

The episode starts with Mindy getting all dolled up but having no friends to join her in enjoying the New York nightlife that TV has always taught me is a thousand times cooler than I’ll ever be, but her friends aren’t having it. Well, Alex isn’t having it and she’s the only one Mindy calls. So Mindy heads out alone and catches the eye of a cute guy in the bar, Adam (Josh Meyers, who has thankfully moved past his That 70’s Show haircut). The catch? Mid-makeout he reveals that he’s a prostitute, so Mindy promptly kicks him out, but not before making the night’s first obligatory Pretty Woman reference.

At work, she’s defensive about her exploits from the night before, and tries to deflect by focusing on Danny’s relationship. She offers him two theater tickets for him and his girlfriend, but he declines, saying he and Alex will be in Vermont together. Who should interrupt but Brendan, bringing the Yankee candles that were delivered to his office by mistake. Danny suggests Mindy take Brendan to the theater instead, clearly watching for a reaction, but Mindy quickly rejects the idea, leaving the tickets with Morgan instead.

Mindy lunches with her friends like this is a thing we see all the time on the show (why they don’t appear more often is beyond me), and asks Alex about her trip to Vermont. While it wasn’t surprising that the trip was a lie, the reason wasn’t what I expected: Alex and Danny conspired to lie to cover up their dinner party that Mindy wasn’t invited to. Okay, maybe this is why Mindy doesn’t hang out with her friends that much.

She confronts Danny when she returns to the office and by “confronts” I mean something closer to “had a small temper tantrum and told everyone about his party to spite him.” He pulls her into his office to talk privately about it, and thankfully calls her on her straight up brattiness. I like that Mindy is selfish and can be juvenile when her feelings are hurt; those are great, believable character flaws that I’m glad she has. But Mindy is also an adult, so it’s good there are other characters to let her know when she crosses the line.

Turns out Danny didn’t want to invite her because then she’d bring a guy, and all the guys she dates are dicks. I’m not arguing with him, but I am curious about how this idea might come up again if the writers throw some Danny/Mindy dating into the mix. Come on, you know they’re at least going to talk about it onscreen; there’s always room for more When Harry Met Sally references on this show, after all. She tries to argue, but he plays the Brendan trump card, revealing (and exaggerating) what he saw go on between them at the hospital. Adam suddenly showing up at the office looking for Mindy’s payment doesn’t exactly help her case about the type of guy she goes for.

After she gets him some cash from the ATM, grumbling the whole way, he offers to make it up to her with some coffee at his place. His apartment is TV gross: Mindy talks a lot about how tiny/grimy/sketchy the place is, but really it’s well-lit and not visibly dirty and almost spacious except for the two “bedrooms” divided by a blanket partition. Adam reveals that his initial New York dream was to become a singer-songwriter and Mindy gets him to play the keyboard and sing for all of a minute. He’s talented, pretty, and has enough of a heart of gold for Mindy to want to “Pretty Woman him” to make him presentable for Danny and Alex’s dinner party.

She anticipates much more of a scene from the saleswoman at the store than she actually gets and is visibly disappointed. While this bit is clearly about subverting the expectations of the iconic Pretty Woman shopping scene, I also wonder if the saleswoman’s reaction here also has to do with gender. Does Adam command more respect than prostitute Julia Roberts just because he’s a guy? It’s not an issue the episode explores at all, but it certainly got me thinking about the implications of a Pretty Woman role reversal. I’m thinking there should be a gender swap remake starring Diane Keaton and Zac Efron, but maybe I’m alone in that.

Anyway, Mindy brings Adam to Danny’s party, which has far too many people for Danny to be comfortable. There’s a hint of an almost-subplot with Jeremy trying to let Maggie down easy since he’s come with a date only to find she’s moved on to a buff Australian guy. And that’s it, that’s the whole story there. Adam spends the night lying about what he does for a living – somehow coming from “railroad money” sounded like a plausible cover story – and Mindy spends it trying to show off her date-picking skills. She gets Adam behind the piano, where he impresses everyone with his musical skills, and she’s finally proud.

Danny, however, being the macho guy that he is, can’t let another dude threaten his dominance in his own home and gives in to people asking him to play a little something for them too. He struggles his way through the beginning of Für Elise and it’s so horribly awkward you can hear a pin drop off-key, but Adam swoops in with the accompaniment and saves the situation.

Mindy gives herself a tour of Danny’s bedroom, which includes the Spanish edition of Catcher in the Rye and dandruff shampoo in his shower, and he takes the teasing too personally and starts listing his faults to her in the shower stall. She apologizes for not telling him about Brendan, and says she was embarrassed because he treated her badly. That admission stops Danny in his tracks, and he immediately softens when he tells her Brendan was an idiot for mistreating her. Aww. And that’s not sarcastic, I genuinely thought this was a sweet moment.

Of course it all goes to hell when Mindy brings up Danny’s ex-wife to Alex, who was blissfully unaware of the fact that he had ever been married, and Adam plays an original song with lovely music but completely awful lyrics. He finally can’t take the pressure anymore and announces that he is a prostitute and proud before laying a big one on Mindy and leaving the party. You do you, Adam. Mindy fields questions from the rest of the group, and Kaling really nails the highly-uncomfortable-but-trying-to-save-face vibe that Mindy’s giving off here.

Outside, Danny is drowning his feelings about breaking up with Alex in a beer and a cigarette and Mindy tries to talk him into pulling it together. He takes offense to that, considering she just brought a prostitute to his party and also inadvertently caused his breakup. He seems to regret his angry outburst after she leaves, however, so I’m hoping for awkwardly apologetic Danny in the near future.

The whole thing ends with Morgan and Mindy on the subway together doing impressions of Danny after Morgan turns Mindy’s taking chances on the “wrong” people into a positive attribute. It’s a nice moment between the two of them; Morgan’s usually too busy being ridiculous to have serious conversations with people, and it’s nice to see these two acting like real friends instead of just coworkers.

It’s moments like that between characters that really make “Pretty Man” stand out more for me this week than “My Cool Christian Boyfriend.” The development of people who aren’t Mindy or Danny is coming along slower than I’d like, but I hope this new multi-faceted Morgan is an indication of character complexity to come in the rest of the season, or even into the next. Plus, this episode actually had enough funny one-liners for me to make my usual list again:

Betsey: “Dr. Lahiri, there’s a man here to see you. He’s handsome, like my Uncle Brent on Easter.”

Morgan: “The secret ingredient is love. I’m kidding, it’s whiskey, there’s no love in these wings.”

Danny: “No man is hot. Paul Newman was handsome, but that’s it.”