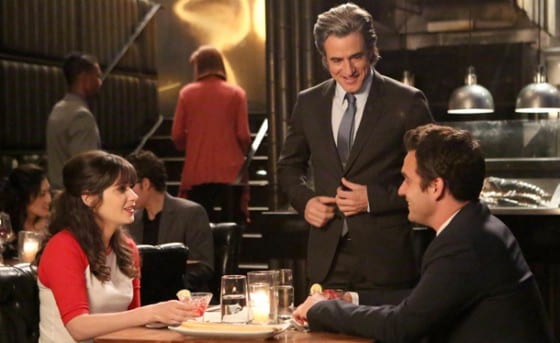 It’s all about tension and unresolved relationships in tonight’s episode of New Girl as it opens with Nick’s hands strategically placed on Jess’s upper breast, her left upper breast; a part that Nick says is underappreciated on a woman’s body.

Of course, some things happened before this such as Winston and Schmidt fighting over where to use chargers and Nick and Jess awkwardly trying to converse but really, in terms of the big picture here?

Nick’s hand is on Jess’s boob and it’s wicked awkward.

They’re perfect for each other!

But really, they’re stuck in an uncomfortable situation and to try and at the very least make the moment come full circle, Nick takes his other hand and puts it on her right upper breast. They both cannot decide if it makes the situation better or worse.

The next day Jess goes to Cece to ask if the motion is at all sexual while Nick is out talking to his friendly neighborhood bench sitter Tran from several episodes ago (“Menzies” to be exact). His interaction proves to be much more insightful. He confesses his feelings to this serene-faced man about his father’s death teaching him that life’s short and now he wants to grow up! That means mowing a lawn, his own lawn, in dark socks—preferably-simplistic and bizarre all in one.

But the big risk he wants to take is asking Jess on a date and making the next big move despite Jess’s belief that Nick will always keep it in a weird middle ground because of his fear of commitment.

Nick fakes a proposal to Tran, saying “Jess, you are a beautiful woman, ever since I’ve met you my life hasn’t been the same and I’d love for you to go on a date with me.” Nick Miller, you dog you. This is a crucial and almost underplayed moment for the character. We’ve seen Nick dance around this topic for multiple episodes now but for the most part he’s been the forefront driving point of this relationship and admitting his feelings, albeit to a stranger, is a momentous step in the will they/won’t they approach the show has going for them.

However, that speech doesn’t go as planned once he’s face to face with Jess and instead it comes out garbled and incomprehensible (“Dirty J, Dr. Day, my toilet sister…if so, food.”). Despite this, Jess gathers that he wants to get food later and they have a tentative date set even if it didn’t come about in the suave matter that Nick would have preferred.

Nick runs into Schmidt’s room to ask him for advice about his clothes and it’s a testament to Max Greenfield’s talent and comedic timing that his instantaneous response of “Burn them, burn them all!” makes it even funnier than the line itself.

Schmidt and Winston enjoy getting to clean Nick up for his mysterious date. Schmidt lends him a suit, Winston shaves his neck beard, and they warn him about talking about his negative personality traits: his alcoholism, him being poor, his poor temperament etc. They forget to have him mention who the mysterious lady is though until it’s too late. It isn’t until he’s already left that they put two and two together and realize that the date must be with Jess and instantly think of ways to sabotage it. They see Nick as the glue of the trio and without them they wouldn’t work. He’s the buffer of conversation.

Nick meets Jess at their proposed date spot and it’s clear that they’ve both misinterpreted what this date night entailed. Jess is dressed casually and expecting hot dogs from a vendor as their dinner, Nick has made reservations and borrowed money as a way to impress Jess. He convinces her in the end to go with him but not before they’re stopped by a motor-cop who caught Nick jay walking in the first of many similar gags of the night. Nick keeps his cool despite the ridiculous fine he must pay and the two walk in for the beginning of a supremely uncomfortable date.

Jess is trying to discern Nick’s motives, is this a date or is it a dinner, with champagne, for just friends? Nick takes the coward’s way out just as Russell (Dermot Mulroney), Jess’s ex-boyfriend walks in. He walks up to them with a whole lot of passive aggression, telling them that he’s glad it finally happened which throws them into their next tailspin. Jess suggests they go get a drink to which Nick responds “drinking to forget, that’s my sweet spot.” Gotta love Nick and his sad sack attitude.

This plan almost pans out until they’re stopped short again by the same police officer from earlier as they once again try to jaywalk. Instead of facing the charges they run away back into the restaurant, waving at Russell as they pass that this isn’t a date, and decide to drink there and discuss what’s going on in a reasonable and adult fashion.

Which in turn changes into a discussion about what the other has to do to keep the other from being turned on and the amount of effort it will entail.

Nick tells Jess his weakness is when she’s dainty and in distress, needing help with her computer or help with taking a top off of a jar. Jess’s fantasies are on the stranger side, telling Nick that when he gurgles his beer it’s as if he was standing under a hose in a white t-shirt.

They eye each other a bit, silently flirting and decide, hey, a date can’t hurt too bad and go and kick Russell and his date out of their table to reclaim their spot.

They’re a few drinks in by the time Russell walks past again and they try to catch his attention which only proves to annoy him further and he tells them that they’re “really something.”

Jess and Nick being who they are can’t let that go and chase after them to demand that he tell them what that means. He tells them that they live together and have tried going on a date three times in the same night—don’t they see something messed up with that? They clearly don’t know what they are he tells them, which may seem like an easy copout to addressing the issue if it hadn’t already been mentioned numerous times in the episode. Russell decides to play a game with them and tells them each to write down what they think they are to each other and hand them to him.

They’re hesitant but concede, obviously both thinking they’ll come up with the same outcome. Yet Russell’s face says it all when he reads what they’ve both written and pockets them, saying it was a stupid idea. Jess and Nick argue until they’re caught about to jaywalk again and they’re saved from knowing each other’s true feelings.

What do you think they said? Did one profess some deep undying love while the other dismissed the idea? Who was love struck and who was in denial? Did they both share something deep that Russell felt was inappropriate to share at the certain time? My guess is on Nick sharing something personal and Jess being the one who’s fearful of commitment despite her earlier blaming of Nick.

The two end up sitting on a curb, exhausted from the night of activity and uncertain on how to move forward. After some stalling Jess suggests that they take on a middle school dance policy and be three feet away from each other at all times in order to prevent any more unwarranted situations. Nick agrees but instantly breaks the rule by slowly reaching his hand over to grab her breast once more. He instantly apologizes and says he can’t help it, they have amazing squish factor.

It’s late at night when they meet up again, both having forgotten to actually eat at their date and it’s a quiet run-in, both trying not to disturb new boundaries that may or may not actually be in place. She has trouble opening a jar, he gurgles his beer, and they’re both done for. They walk side by side, rich with tension, to their rooms.

“Goodnight, Miller.” “Goodnight, Day.” They close their doors and lean against them respectively, both trying to process what exactly they’ve gotten themselves into as the audience tries to figure out where they go from here.

There’s a side plot with Winston and Schmidt about letting a homeless man into their home called Outside Dave who ends up locking himself in their bathroom where their chargers lie and Schmidt tries to sneak in from the roof, only resulting in the homeless man shaving a portion of his leg. It’s ridiculous, it made me laugh, but it was borderline poorly integrated into the rest of the plot.

The issue at hand is that of Miller and Day. They’ve kissed; they’ve kissed twice, long and passionately. They’ve admitted to a certain extent their unresolved feelings, have come up with an open-ended solution and for the most part have left it all unresolved. They’re still both obviously attracted to one another—if the writing wasn’t selling it Jake Johnson and Zooey Deschanel’s searing chemistry would—and both haven’t told the other the extent of their true feelings.

There’s an impending blow up on the way, the scale and result unknown, but they must reach a climactic moment before they can press forward, whether the effects work to their benefits or their detriments.

Nick and Jess are one of my personal favorite “couplings” of sorts on television right now because of showrunner Elizabeth Meriwether’s ability to build an authenticity into the pairing. Relationships don’t just happen overnight (besides the one night stand variety) and friends don’t just turn into lovers. This is a relationship that’s been slow in development and there’s a lot of be gained or lost with one wrong step. The two are scared, for good reason, and hesitant, for good reason. And while as an audience member I was wishing for them to throw caution to the wind, as a lowly critic it’s interesting to watch a new take on a relationship that’s been set in stone since the beginning of the show when Nick was the one to start the impromptu sing along to “(I’ve Had) the Time of My Life”.

I want the couple together, but not for the sake of the show’s quality.

What will this gang get up to next? I can’t wait to see as this fantastic second season slowly comes to a close.