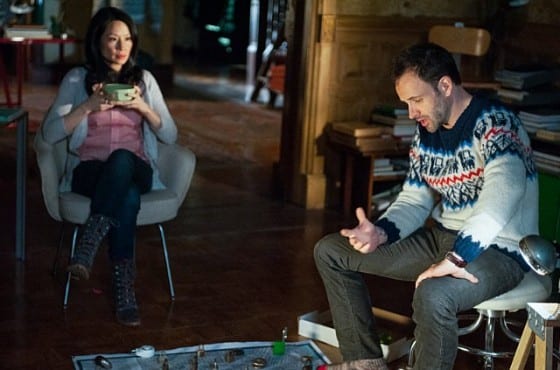 It would be easy for a show such as Elementary to get bogged down by the macabre: grizzly images, murders by the handful, stab wounds and gun shots a plenty. So when they take an episode to lighten the plot up, air the characters out and try and achieve some smiles, it’s welcome change. Nothing neared the disastrous slapstick genre but instead delivered energized performances, offbeat and funny character anecdotes and most importantly, banter between Joan and Sherlock that was so charmingly playful that it could have been the Holmes and Watson comedy hour and I would have paid no mind.

Of course the episode couldn’t just completely rid itself of its origins and did have to start off with a literal bang to get the story going. A security guard to a electronics company of sorts is shot and then killed by a woman in a gang of thieves that make their way into the building.

And so begins the case of the week—the main detractor? The big old blizzard heading their way.

Joan walks into the two’s shared apartment talking about the supplies she bought to stock up for the storm when she realizes it’s not Sherlock she’s talking to but a woman she’s never met. She’s quick to introduce herself, her name is Ms. Hudson and Sherlock’s just helping her out for the time being. Joan goes to Sherlock to confirm and is told that Ms. Hudson has gone through some tough relationship drama and is simply sitting out the storm after the most recent catastrophe. He tells her that their history goes back to when he was still working at the Scotland Yard.

And yes, she is in fact a transsexual.

Ms. Hudson is a character from the old Conan Doyle series and was originally the land lady and, not to appear too complacent with taking characters derived from literature, show creator Robert Doherty has proven once again his willingness to create a truly original show about an older series of work and has turned the character of Ms.Hudson on her head. No longer is she the older woman pattering about but is now a bombshell blonde as well as a transsexual.

To put on my activist hat for a brief moment, the casting of an actual transsexual actress as a transsexual character is a BIG deal for television and will very likely be undervalued. Transsexual representation in most mediums of entertainment is still rare, with derogative terms of such individuals being more common. It hasn’t yet become taboo to poke fun at such individuals to my own frustration as well as many others so that fact that Doherty and co. would welcome on a character such as Ms.Hudson as a trans woman and as a character who could prove pivotal is a progressive step. Entertainment is a luckily liberal business in many regards but it still has a ways to go before all members of the LGBTQ party are equally and as respectively given their representation. This was a step in the right direction.

Digression and distractions abound, so onto the next plot point.

Captain Gregson calls them in about the homicide from the previous night and the duo investigates the scene, with Sherlock pushing Joan into sharing the spotlight of the detective. Together they deduce that the dead man let the thieves in due to no forced entry, and that because of certain blood patterns the guard must have gotten one shot in before a second was delivered at him. This slowly developing teamwork is just about the highlight of the show. Joan isn’t yet a genius at the same capacity as Sherlock, lacking his uncanny ability to notice everything, but she’s supremely intelligent and her past fields of work have allowed an eye for specificity.

Sherlock isn’t too sure he’s going to take the case however once they realize that the group who broke in only seemingly stole a few hundred new styles of phones. Sherlock doesn’t work on cases that don’t right a social grievance or pique his curiosity. Conveniently, the power goes out just as he’s about to back out, and this walk back into the “dark ages” leads him to take the case, interested in a challenge.

GPS tracking is out of the question so Sherlock uses his own limited supply of energy and uses Instagram as a means to find the phones’ locations. They track them down until they find a homeless man selling the phones to a crowd of people. Sherlock asks him how he came upon them and the man tells him he found them as some people ran away from the scene. Sherlock leaves the phones in his care as well as some money for a warm place to stay the night.

Remember because this is crucial to the character and pops up a few more times throughout this episode—this is a gentler, kinder Sherlock, a Sherlock who has been humbled.

Detective Bell has been busy as well and finds the potential suspect at a local hospital who’s been admitted for a stab wound. A blonde hair from a wig leads him to arresting the woman for the murder of the security guard, realizing that a fellow member of the group must have stabbed her to distract from the bullet wound.

Sherlock and Joan find a place in New Jersey where Sherlock believes a company will be the next target, leaving Ms. Hudson and her most previous lover to sort things out.

They’re met with a dilemma considering the entire city is shut down due to the storm and begin to trudge it out to try and contact the police in time. Instead, they find Pam, a plow truck driver and Sherlock tries to no avail to commandeer her vehicle. Instead, she lets the two ride shot gun and after being convinced, decides to drive them to where they need to be in New Jersey.

The car ride is one of the best and funniest parts of the episode. Pam tries to make small talk which Sherlock immediately and rudely dismisses much to Joan’s chagrin. She excuses Sherlock’s bad behavior and tells Pam he’s in a foul mood because he gets car sickness which results in a five-year-old’s petulancy. This leads to an odd couples spat where recent frustrations come to the surface. Joan is annoyed Ms.Hudson was allowed to stay without her consent despite the fact that she likes the woman. Sherlock tells her that she identifies with Ms.Hudson’s feeling of a lost identity since Joan was lost in that sense before she met him—an idea she rejects. Sherlock hasn’t paid the phone bill. It’s all bits and pieces of information that make up these well rounded and interesting characters and Lucy Liu and Jonny Lee Miller play these moments with palpable joy.

They arrive at their destination only to discover they’re too late and it’s already been robbed.

They perform some sleuthing and find out that the getaway vehicle only left a few hours ago due to tracks and the vehicle in question was an ambulance.

Bell meets Joan and Sherlock at a halfway point to try and track down the ambulance instead they find two regular EMTs who’ve been set up by the anonymous parties. Poor Sherlock is very confused about why these events that were supposed to so clear cut are staying a step ahead of him.

Back at the apartment Sherlock uses Clyde (their pet turtle) and an array of figures to try and map out the city and find a conceivable way that a ambulance could make it out of the city inconspicuously with millions of dollars.

The possibilities are few. Unless, they had an inside worker helping them.

And that’s where they lose me.

Third acts are crucial in any form of entertainment. It’s where there’s either the final blow, the big reveal or the climactic moment that the first two thirds have been building up to. While narratively speaking not every work of art needs to follow the same pattern, most do because it works—especially in crime dramas on television.

I had begun to grow too hopeful and believed that maybe Sherlock wouldn’t figure this case out or maybe this will all link back to a Moriarty character reveal, a character that’s pulling all the strings. Instead it was a random character that we’d briefly seen earlier in a passing moment who was only helping out the merry band of thieves as a way to make an extra buck.

The episode ends with tying up some lose ends: Ms. Hudson will come each week to clean the apartment as a cleaning lady (a nod to the original) and Sherlock will pay her to help her back on her feet. Generous in more ways than one, but he’ll never admit it. He’s too busy setting up another lesson for Joan’s benefit and why distract him from such a task.

The ending was absurd and it was by all counts a filler episode but it was ridiculously enjoyable and sometimes, on a Thursday night at the end of a long week, it’s just what a viewer needs. I’m keeping my views optimistic for the following episodes (which you’ll have to wait a couple weeks for) and hope to see an upward swing in momentum in terms of storytelling. The ground rules are laid out, the characters are settled, so now it’s time to shake it up a bit.

Don’t let a filler episode be a detractor from the show as a whole. Every series has them, not every episode will play into the bigger picture, sometimes what’s important is the measure of enjoyment that you took from it.

And I took quite a bit thank you.