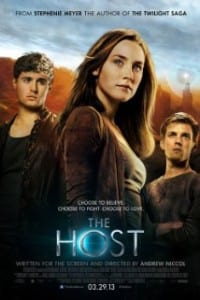 I think you know what kind of review this is going to be when I tell you that the best thing about this movie is that a.) it’s not in 3D and b.) there’s some pretty cool cars featured. But for a movie that’s ostensibly about the indestructible aspect of our shared humanity, “The Host” didn’t seem to feature a lot of human artistry.

But such is the curse of being a character from the Stephenie Meyer universe, a magical place where hot yet tender vampires are smothered in Swarovski crystals and humankind is on the brink of extinction but still seems to have adequate access to hair gel.

“The Host” is indeed a Meyer creation, her follow-up to the “Twilight” juggernaut about an alien race that takes over most of the human bodies on Earth, save a few plucky rebels. One of those rebels, Melanie (Saoirse Ronan), is captured by the alien Seekers and implanted. But Melanie’s consciousness is still alive and active, and she eventually turns her alien counterpart and escapes to one of the last human refuges, pursued by our incredibly attractive extraterrestrial overlords.

All in all, it’s actually not a terrible premise; perhaps a little derivative, but one could make the argument that all sci-fi is derivative of it’s own predecessors to one extent or another. If this was essentially an unofficial sequel to “Invasion of the Body Snatchers” I think it could have had the potential to be above average.

But Meyer’s story, as told by screenwriter and director Andrew Niccol, uses this solid foundation to build a rickety and uninteresting tale about a teenaged love triangle, utilizing her trademark high school stage play dialogue punctuated by men taking their shirts off.

I spent much of the movie trying to figure out a better way to demonstrate the fact that Melanie’s body has been taken over by an alien known as The Wanderer. Melanie’s voice is still heard in Wanderer’s head, echoing like she’s in a cave. The result is that there’s an irritatingly constant voiceover in Ronan’s patchy American South accent, giving Ronan’s body directions and spouting lousy one-liners. Maybe it would have been better to see Melanie in a physical form, directing the Wanderer to give us a sense of her presence. Maybe the Wanderer could simply be talking to herself, leaving us only the context of what Melanie was saying. Maybe Niccol could have simply set fire to the film and I would not have had to watch it. Well, we can’t get everything we want in life, so just get ready to hate Ronan’s disembodied voice so intensely it actually surprises you. Ronan herself is a fine actress; I especially enjoyed her in the underrated thriller “Hanna” as a teenaged assassin. But she’s given absolutely nothing to do here except long for fellow rebels and living Ken dolls Jared and Ian (Max Irons and Jake Abel), and talk vaguely about how tough she is.

There is a point where you start to put your smug pretension away and start to, if not enjoy, then at least experience what you’re watching in a neutral way. Not coincidentally this is when a bearded William Hurt slouches into the picture as Melanie’s Uncle Jeb, a gun-toting, sunburned Texan with a heart of gold. This is possibly the worst example of slumming I’ve ever seen, but Hurt seems to be having a good time, and he thankfully humanizes some of the sanitized coldness of Niccol’s script and makes everyone around him appear to be better actors than they actually are.

The other slummer is Diane Kruger, earning a house in the south of France playing the nefarious alien Seeker. Kruger’s flawless face, angular bearing and icy stare fit relatively well with the stiff, inhuman things she supposed to say, but I wish they’d utilized her better and allowed her to chew the scenery a little more. As it is, she spends most of her time driving the world’s most awesome vehicles: a sterling silver Lotus, with a matching helicopter.

The end falls apart when it turns out that the only reason the humans haven’t been able to extract the aliens from someone’s body safely is because they, I don’t know, weren’t asking nicely enough or something. The love triangle is resolved handily and there are happy endings all around- with a kicker of course to guarantee a sequel. Honestly, I wasn’t paying much attention at that point- I was trying to turn on my phone to see if it’s actually possible buy a Lotus in pure silver.

Because I’d be willing to go on a budget for that.