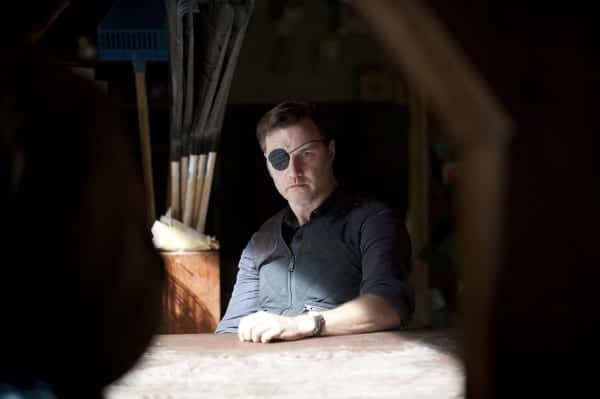 Rick faces the Governor for some “friendly” negotiations

This episode was all about building tension, but the unfortunate part is that none of what got set up this week is going to be fully resolved until the finale at the end of the month. And even then, we’ll probably be left with some kind of cliffhanger to drive us nuts until next season. So while there a lot of things I enjoyed about “Arrow on the Doorpost,” I’m not so much a fan of the only payout being anxiety.

What I love most about this episode is the way the writers compare and contrast Woodbury and the prison. Obviously, there are a lot of similarities drawn between the two leaders, Rick and the Governor, but this episode also makes it a point to bring the “backup” group members (Hershel, Daryl, Andrea, Martinez, and Milton) together too.

Rick and the Governor meet up in some abandoned warehouse/barn structure that I feel like only exists in post-apocalyptic stories to negotiate an agreement. Actually, Andrea was the one to call them together, but they kick her out of the actual meeting space pretty quickly. Honestly, I’m uncomfortable with the whole “that’s nice, sweetie, now let the menfolk do the talking” vibe I got from that interaction. Andrea is the only one with the sense to want to work this out peacefully, she went to a lot of trouble to get to Rick’s group again and set this whole thing up, yet the other characters (and some of the fans) continue to treat her with contempt and I don’t understand why.

The Governor makes a big show of negotiating without weapons, all with one taped under the table they’re sitting at, and the level of smarminess he manages to achieve throughout his talk with Rick is record-breaking, even for him. Rick doesn’t talk much, being the strong, silent type and all, but when he does speak he seems legitimately interested in peace talks. Unfortunately, the Governor is only interested in Rick surrendering, so while he waits for that to not happen, he takes out the whiskey he brought with him.

Outside the negotiation space, Milton suggests the five of them discuss the issues themselves while they wait. Daryl’s response is to call him the Governor’s butler, which makes Martinez chuckle before he tells Daryl to shut up. Milton reveals that he recorded the “battle” as he calls it for posterity’s sake, and Hershel’s the only one who seems genuinely interested. To be honest, though, I wish we got to explore more of Milton’s methods for recording Woodbury’s history. What does he choose to write about? How does he record what goes on? Do they really think there will be a society again that will study their history? I think this could all be a fascinating look at the whole idea of history being written by the victors; we could see firsthand the “truth” from both sides and then see what ends up in Milton’s records. Unfortunately, that probably doesn’t involve enough zombie carnage for the ratings, so my admittedly dorky curiosity about this will likely go unsatisfied.

Anyway, Daryl, Martinez, and Andrea head off after a few stray walkers that are encroaching, leaving Milton and Hershel to chat about his leg. Milton’s dying to know the details about the bite and the amputation for his data, but Hershel refuses to show him his stump. Well, unless Milton buys him a drink first. For the thousandth time, I’d just like to acknowledge my love for Hershel this season. The two of them laugh, and the sense of oncoming doom heightens exponentially.

Daryl and Martinez get into some sort of weird, masculine pissing contest with the way they’re killing the walkers (though Andrea is the first one to enter the fray, I’d like to point out). Martinez sure can work a baseball bat, though I guess Daryl “wins” by throwing a knife into the final walker and effectively getting the last word. He offers Martinez a cigarette after, and asks if he was in the army. Nope, turns out Martinez just never got over losing his wife and kids to the walkers. Everybody’s got a backstory, and all of them are tragic. It’s easy to get caught up in demonizing Woodbury but I like moments like this precisely because they remind us that everyone here is human and everyone is just doing their best to survive the zombie apocalypse.

Back at the prison the others are unpacking all the guns and ammo Rick, Michonne, and Carl brought back from Morgan’s. Merle is chomping at the bit to go after Daryl and maybe just straight up kill the Governor right there at the negotiations. It’s not the worst idea to just try and get rid of him when they have him mostly alone, but it’s also not the best, so Glenn stands firm on not letting Merle leave. This is the first time we’ve really seen Glenn step up into a leadership role, and it suits him pretty well.

The Governor gets personal in his conversation with Rick, commending him for raising a baby that might be another man’s, then sharing his own sob story about losing his wife. I forgot she hadn’t been taken by walkers, just an ordinary pre-apocalyptic car accident. I don’t doubt that the Governor’s emotions about his wife’s death are genuine, but the look on his face when the story unnerves Rick enough to get him to take a swig of whiskey doesn’t sit right with me. He’s the most manipulative character on this show, and it’s getting harder to tell when he’s being sincere or not. It’s possible that he was only ever sincere with his daughter, and now that she’s gone he has nothing to lose. In any case, it basically makes my skin crawl to watch him, so props to David Morrissey for being so good at his job.

Outside, Hershel hobbles his way over to Andrea for a chat. She’s upset that Rick and the Governor kicked her out when this was all her idea in the first place. Then she throws a curveball into the conversation and asks what happened to Maggie when she was captive. Hershel’s only response is that the Governor is a sick man, and while that is undeniably true, I feel like in this context it’s implying things that didn’t actually happen. Regardless, I think Andrea knows that he’s terrible and is just looking for confirmation considering the next thing she does is admit she can’t stay there anymore. Hershel says if she makes the choice to come with them then she can’t go back. I think she belongs with the group, I want her and Michonne to reunite and be badass best friends again, but judging by her last visit, she may not be so well received. Clearly this is a loyalty issue, and when the lines really get drawn, she’ll just have to choose for real.

The Governor finally reveals his terms of agreement as he slowly removes his eye patch, much to my usual response of disgust and awe at the makeup team’s mad skills. All he wants is Michonne. If Rick gives her up, then that’s it, there won’t be a bloodbath. Suddenly, “Clear” makes all kinds of sense within the chronology of the show. We had to see Rick warm up to Michonne, we had to see her prove herself once and for all, we had to go and get attached to her as a person so that this would be harder, both for Rick and the viewers. Well played, writers.

In the prison, Merle tries to talk Michonne into leaving with him to take out the Governor right now while they know where he is. He says the rest of the group is strong, but they aren’t killers. Michonne, bless her heart, reminds him that Rick, Maggie, and Carl certainly count, and she sticks with the opinion of the rest of the group. It’s especially rough watching her align herself with the group that might end up selling her out to the Governor.

Glenn’s taking watch like the good substitute leader he is, and Maggie comes to join him. He apologizes for making it all about him post-Woodbury and for not giving her what she needed for support. Surprisingly mature move; maybe the whole leadership thing is doing Glenn a world of good, character-development-wise. Maggie accepts his apology and they get all lovey-dovey, though having the walkers out there staring is killing the mood a bit. They then abandon their post to have unprotected sex (but inside!) and while this is all very romantic and they’re a cute couple and all, that feeling of doom sets in again. None of this can end well, and we all know it.

Rick tries to talk the Governor out of his terms, implying that this “two-bit vendetta” against Michonne isn’t worth the Governor’s time, but he’s not having it. Rick has two days, and then they’ll meet in the same place at noon. Such a classic Western showdown time. Sometimes I think the Governor likes to indulge his love of theatrics in as many ways as possible. They leave without resorting to a shootout, and the interspersed groups of backup separate out again as the two sides leave for home. Andrea stays with Woodbury, but it’s clear she’s going to have to make that call soon.

Some other indie song full of guitar and vocal harmony starts playing, and I’m kind of over this whole soundtrack to the episode endings thing they’ve been doing. At least it doesn’t take up the whole ending; after a cool visual sequence of the two groups arriving at their respective homes in very similar fashions, the talking starts up again. The Governor tells Milton they’ll just be shooting whoever comes to bring Michonne in two days, and Rick tells his group to prepare for war. The only person he tells about the Michonne thing is Hershel because he’s hoping to be talked out of it. As it stands, though, the episode ends with the implication that Rick is prepared to sell out Michonne to save the others, though at least he knows that’s probably a long shot.

Despite having a lot of great moments and an interesting intent to draw out the similarities between Woodbury and the prison, this episode never properly dealt with all the tension it built up. I understand these next couple episodes are really all just leading to the season finale, but I’d appreciate a little more payoff than we ended up with here. Really great episodes not only add to the season-long arc, but are capable of standing on their own as well, and this one only gets the first half of that equation right.