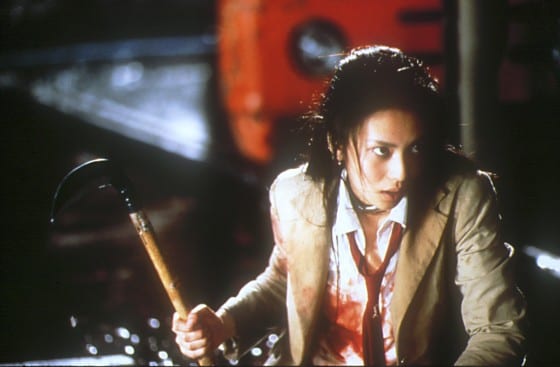 Putting aside whether the charges are true or not, I recently got a chance to watch the 2000 Japanese film, in which high-school aged boys and girls are sent to a remote island to engage in battle to the death until only one emerges.

In The Hunger Games it’s made expressly clear why such brutal games are being played. An authoritarian central government sponsors each year’s games in exchange for not laying waste to outlying districts. Send us two of your children to hack away at others’ for our entertainment and we won’t invade and exterminate you: it’s very Ancient Greece.

“The Hunger Games is making a ham-handed statement about cultural decay and media appetite for violence, but at least it’s saying something. Battle Royale has no dramatic core.”

Perhaps in Battle Royale the novel it’s explained why similar bloodsport is necessary, but in the movie it’s not detailed very well. A preamble informs us futuristic Japan is out of control with high unemployment and wilding children, and the games are a response to the chaos. But that’s it. We never are told how the games are meant to solve the problem or who watches them. In the opening moments of the movie, reporters and cameramen rush forward to greet the latest battle royale winner, but that is virtually the only moment where we might understand these contests are a media sensation. When the new contestants enter the arena, it seems that only the military is watching, and it’s hard to understand how having these annual combats affect or enthuse the society.

The Hunger Games is making a ham-handed statement about cultural decay and media appetite for violence, but at least it’s saying something. Battle Royale has no dramatic core. If you look hard enough you may come up with some ‘Lord of the Flies’-esque message, but that does not seem to be the principal objective of this movie.

Before you cry foul on me, however, I declare that lack of dramatic purpose is the movie’s strength. I’m certain there’s an idiom I’m missing. The Japanese probably get it, while we Americans scratch our heads. In this sense, I’d compare Battle Royale more to something like Inglorious Basterds (both versions). Battle Royale is camp at its best. The Hunger Games took itself too seriously at times. Battle Royale says to hell with logic and any kind of evolution towards catharsis and indulges in stylized violence and mayhem.

In a sense, The Hunger Games cheapens itself by dealing in violent death but never really showing too much. Kids are dying, but we don’t see it most of the time and if we do it tends not to be graphic. Battle Royale takes off the kid (ha, ha) gloves, as teens sink axes into heads, rip each other apart with bullets, and in various other ways maim and eviscerate one another. If you’re going to make a movie about gladiator-style combat amongst juveniles don’t cop out to get the PG-13 rating. The Hunger Games plays it safe while Battle Royale picks up a weapon and starts swinging.

See Battle Royale if you want to have one of those movie experiences where you say “I don’t know what the hell I just saw but I loved it.”

A sequel to Battle Royale was made in 2003, and The Hunger Games series has more movies in development. I don’t particularly want to see more of either, but I wonder what would happen if The Hunger Games and Battle Royale were sent to a remote location to fight to the death. It’s as tantalizing a set up as Alien v Predator or Hulk v Abomination, and in an age where movies are beginning to make less and less sense on an intellectual level and it’s all about the thrill, why the hell not?