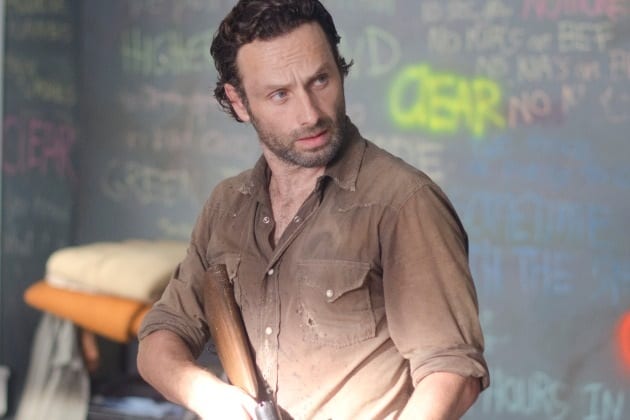 Rick runs into an old friend during his gun run with Carl and Michonne.

For what was clearly a filler episode in the overall arc of this half of the season, “Clear” was an excellent episode. I had given up hope a while back about ever finding out what happened to Morgan, but then they showed that “previously” clip of Rick on the walkie talkie outside Atlanta and I knew this was going to be a good one.

After all the hectic perspective switching lately between groups and locations, it was a welcome change of pace to focus just on Rick, Michonne, and Carl going on their supply run back to Rick and Carl’s hometown. Along the way we get to see evidence of other survivors that had been here: the sign addressed to Erin pointing her towards Stone Mountain (very reminiscent of the messages left in vain for Sophia), the loaded cars, and of course, the actual live backpacker who they speed by without a word. It’s a reminder that there are other people out there, that there are other stories of survivors just like Rick and his group that we never think about.

Their car gets stuck in the mud, and after they dispatch the walkers that come swarming, Rick and Carl have some old-school father-son bonding time when Rick teaches him how to get the car unstuck. They leave the would-be hitchhiker behind for the second time, and it’s clear just how much Rick has changed since the pilot episode. Season one Rick wouldn’t have just ignored a cry for help like that, but New Rick just sits stone-faced along with Michonne and Carl as they drive away.

When they reach town, they’re disappointed to find the police armory already completely raided, though honestly I think it was a long shot to believe there’d be anything there in the first place. All over town there’s cryptic graffiti: arrows pointing to who knows where, “Away with you” painted on the courtyard wall where there’s a pile of burnt walker bodies, and “Turn around and live” on the crosswalk in front of a booby trap fortification.

A stray walker triggers a shot from a mysterious masked gunman on a roof, and Michonne heads up after him. I think we all knew it was Morgan, but it was nice of them to keep the suspense going for an extra couple minutes. He disappears down to ground level, where Carl shoots him, no hesitation, before he can get to Rick. It turns out Morgan is wearing body armor, so he isn’t dead, but Rick at least looks as concerned as I am about Carl’s emotional state after shooting yet another live human being. Carl shrugs it off as usual, which might prove to be alarming someday soon; as a side note, I love that SNL’s Walking Dead sketch this week addressed this, too.

Rick refuses to leave Morgan to a gruesome fate on the streets, so they drag his body upstairs, dodging more booby traps along the way, to find his hideout room filled with more than enough guns and ammo. The walls are covered in even more writing; “Clear” is repeated in spray paint, and when Rick finds Morgan’s walkie talkie, he also discovers the convenient “Duane turned” scrawled across a wall.

Carl is distracted by Morgan’s chalk-drawn map of the town in the adjacent room, and the notes on it show that their whole old neighborhood is now burnt down. After staring at the map with his usual blank expression, he suddenly decides he wants to go alone to find a crib for Judith. Michonne points out that he can’t get it alone and offers to go with him, easily and casually appeasing Rick’s apprehension and thwarting whatever ulterior motive Carl had. He’s cryptic about it, and even tries to give Michonne the slip (which is dumb, there’s no pulling the wool over Michonne’s eyes), but it turns out that he wants to get a photo from a local café.

Naturally, this café is crawling with walkers, who are all apparently chilling on an eternal coffee break, but he and Michonne distract them with caged rats on skateboards and sneak in. A stray walker behind the counter grabs Carl around the ankle (and nearly gives me a heart attack in the process) while he’s reaching for the picture, but Michonne takes care of it. How Carl thought he could do this alone is beyond me, especially when one of the rats gets out and leads the walkers straight to them.

He drops the picture in the process of getting out alive, but Michonne sneaks around the side for all of a minute and somehow emerges unscathed with the picture for him. It’s younger Carl, Rick and Lori together, and it turns out he wanted Judith to be able to know what her mom looked like. Michonne cracks a joke about wanting to go back anyway for the rainbow cat statue she also snagged, and they walk off as friends. Have I mentioned lately how much I like Michonne?

The real meat of the episode and the really great performances come in Rick’s conversation with Morgan. Rick apologizes for all that’s happened to Morgan since he left him, and Morgan responds by sneakily slicing open the zip ties Rick cuffed him with and then stabbing Rick in the shoulder when they fight. Morgan doesn’t seem to recognize him, or if he does, he just keeps talking about people wearing dead people’s faces. Rick manages to pull his gun on Morgan, which stops his ranting and raving long enough for him to beg for death. Lennie James does a seriously fantastic job in this episode as he swings from desperate to raging to crying, sometimes all in one go.

Rick reminds Morgan of who he is with the walkie talkie, but that turns out to be a bad move. Morgan reveals that he and Duane took off on the road after Rick, always listening to the broadcasts at dawn that Rick used to give (Remember those? Man, season one feels so long ago) until one day they just stopped, and Rick wasn’t there. Rick tries to rationalize it and head off Morgan’s anger, saying he had no choice, that they kept getting further out in the country, an endless stream of what must sound like pathetic excuses to Morgan, who then gets into the wrenching part of his story.

He asks about Lori, and whether she turned or not. When Rick says she didn’t, Morgan just sort of chuckles and says “Of course not.” When you think about it, Rick does seem to have whatever post-apocalyptic privilege it’s possible to have; sure, some awful stuff has happened to him, but he doesn’t seem to have lost as much as anyone else. Hell, he found his family only a few days into his search for them, for crying out loud.

Morgan tells Rick the whole story, how he could never quite bring himself to shoot his wife after she turned, how he went into a cellar alone to scavenge for food and emerged to find Duane standing with Jenny at gunpoint unable to shoot her either, how she got Duane, how he had to then put both of them down, how he had to come back alone. It’s hard to convey Lennie James yanking on viewers’ heartstrings in a simple recap, but rest assured, he nails this performance.

Rick offers Morgan a place with them in the prison, but even in his state Morgan can tell something is wrong there. Why else would they need all those guns? He advises Rick to get out while he can, and declines his offer. Rick makes a few ironic comments about Morgan not seeing things properly, but his mind is made up. His purpose is to clear, he says, and that’s what he’s going to stay to do.

And clear he does; he gets right to work loading up a gurney with the walker bodies caught in his traps as Michonne and Carl show up with actual supplies for Judith. Carl apologizes to Morgan for shooting him earlier, and Morgan tells him to never be sorry for that. In the context of his tragic history, this comment makes perfect sense, but for Carl not knowing the story I feel like it might not be the best thing to tell a twelve year-old who already seems to have no emotional response to shooting people.

As they load up the car, Carl tells Rick that he thinks Michonne might be one of them, and I cheer inwardly because I really just want Michonne to stick around forever being the most badass of all. Michonne and Rick even have a relatively pleasant conversation. She admits she used to talk to her dead boyfriend, and offers up a simple “It happens” about him seeing things. They drive off to another episode-ending indie song, which just makes me think something terrible must be coming up—endings are never this relatively tranquil for nothing. On their way back, they pass the bloody devoured body of their would-be hitchhiker and only pause to pick up his backpack off the side of the road.

“Clear” showed us life outside the prison versus Woodbury dynamic, and I am so glad we got to find out what happened to Morgan, even if it is tragic and sad. I feel like the show had lost a little bit of that first season exploration of holding onto humanity in the face of the zombie apocalypse, and this episode brought that back in full force, from Carl’s quest for the family photograph to the backpacker’s fate to Morgan’s deterioration after losing Duane. Obviously episodes like this can’t walkways work, but I’m glad the writers dedicated the time to this story all on its own rather than working it in around other plotlines in a different episode.