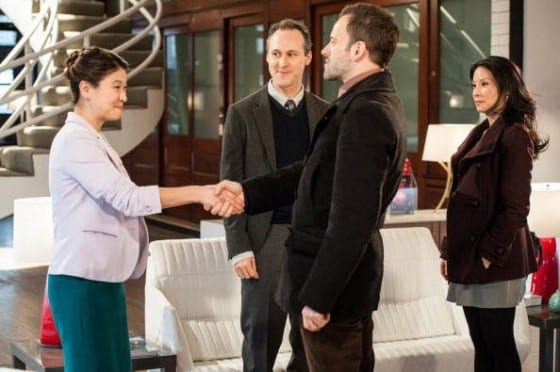 Sherlock (Jonny Lee Miller) and Watson (Lucy Liu) talk to the heads of the genetics lab.

There’s a noticeably different tone in this week’s episode. It’s nothing polarizing, nothing so extreme that it doesn’t feel like the same show, but it’s something new and it’s all down to the fact that Sherlock and Joan are now partners, the more recognizable duo that fans have come to be familiar with. There’s still a feeling of teacher and apprentice put into play, but it’s welcome. And while Watson is the one being taught, she in no way the weaker of the two. Showrunner Robert Doherty and co. has finally progressed to the place we’ve all been waiting for, for when the cases begin to ask for Watson and Holmes, and not just the latter. It’s their partnership, not only their friendship, that greatly improves interest in the series. Because why watch without the famous pairing.

The episode begins, as you could have guessed by now, with a case to be solved. Rather than being the beginning of one, however, it’s the end. Sherlock inspects two bodies and when asked about his thoughts, gives it over to Watson and asks for her deduction of the crime. She stumbles a bit, points out some obvious alterations, and allows Sherlock to cover the end but she’s done enough for now, and it’s well received.

This is something I’ve waited for. Finally! Finally, Watson gets moments to shine as a new detective, showing intelligence and vigilance in the field despite the brevity of her practice. It’s a nice surprise that not only are we getting to see her impress Sherlock, but also exceed his expectations. He tells her that in his line of work he’s expected to see the details in everything because maybe, and it’s not always the case, but maybe there will be something bigger at play than what meets the eye, and it’s their job to uncover the truths. Watson has always been trained to look for the minute, whether it be in surgery and looking for what’s troubling her patients’ health, or in being a sober companion and constantly searching for the triggers, the reasonings and the fail safes. Now she’s just putting the skillset into a different career.

It doesn’t hurt that Lucy Liu is allowed to play up the awkward humor of the scene, allowing herself a lighthearted delivery that isn’t typically shown in this version of Watson.

They walk away from the opening crime and into the second, where a limo driver awaits the duo in order to usher them into the car where a big name business man sits inside with a case for them. He tells them that he has recently been diagnosed with dementia, a form called CAA that is hereditary. He tells them to hold their sympathy because he believes the disease has been artificially induced since there is no family history of past cases.  Sherlock however, believes he’s only looking for a hope, clinging around smoke and declines because he doesn’t choose cases that will lead to no outcome and apologizes one more time before leaving.

Despite being essentially courted by the man (with an endangered bee no less) he continues to turn down the case and instead focuses on his training Watson until he gets a call from Captain Gregson. The man they’ve dismissed has just shot and killed his limo driver with no prompt or provocation, and is now facing murder charges.

The duo show up at the scene where the man in question is now trying to again convince Sherlock into aiding him in finding who injected him with the disease. He tells him that the genetics lab he went to believed it could be done and that there is a chance that the dementia was offset by some outsource.

Sherlock agrees and tells Watson he felt he needed to, otherwise it would have felt as if he was denying a man’s dying wish. And look, there’s that sentimentality and human connection that makes this version of Sherlock Holmes so utterly watchable.

They go to the genetics lab and meet the two scientists to discuss the few people in the world who could possible genetically engineer this virus.

Later that night Sherlock finds a Norwegian man who he believes the man’s son paid to create the disease and says the two obviously must go to Norway. (Hint: they don’t.)

Natasha, a scientist from the lab, texts the two of them to meet her so that she can divulge more information, but when they get there they find her dead from stab wounds.

The body count is getting mighty high already.

It is however, yet another instance for Sherlock to test Watson’s burgeoning skills and they’re already showing improvement. Am I allowed to be taken seriously if I say these scenes are cute?

They talk to the son and try to get him to admit it but they’re sent away. Not before both of them have swiped some form of DNA samples from the brothers. It’s too late however, considering another man has been convicted of Natasha’s murder.

Watson and Sherlock work late into the night trying to figure out if blood DNA can be faked and while Sherlock ends up falling asleep, Watson works tirelessly and uses an old contact as a source who tells her that it could in fact be done. She’s giddy with finding out a portion of the case and again, Liu really shines in this episode where she gets to play multiple facets of emotion.

The main problem with this episode is sadly the third act, which seemingly was thrown together. It wasn’t an episode where the character development and the crime portion worked seamlessly and rather seemed like it was there only for Watson’s development. This would be fine if the case wasn’t so incredibly difficult to follow. There were too many bodies, too many suspects and too many names for it to be a case to follow, nevermind figure out on your own. By the end of the episode one of the sons admits to killing Natasha out of a crime of passion (she was his fiancé and he believed she had been cheating on him), they learn of other individuals who had been afflicted with CAA as well yet without any family history of it, and then the guilty party ends up being an individual that no one would have guessed because of the zero stakes that character claimed.

It’s a shame since the rest of the episode worked so wonderfully. I’ve talked endlessly about the Watson and Holmes dynamic and it could very well be tiresome, but the actors and the writers keep it from being so. The audience wants to watch these two and they continuously evolve into well-rounded characters, just as their relationship turns from tentative into warm and trusting. They joke with each other, they care for each other and they are both looking out for the other’s well being and it works.

There was subplot where Sherlock was sending Watson to pick up and drop off dry cleaning (that’s her household chore, his is cleaning the fridge) and it’s his private test of her abilities. She begins to realize something is off with the cleaners and starts to ask questions to no avail. It takes a couple more tires before she realizes the criminal activity taking place and calls upon Detective Bell to have them arrested, without Sherlock’s help.

And he’s proud! He didn’t doubt her and he let her have her own way with the case. It’s refreshing to see Sherlock try and build Watson’s abilities with no sense of contempt, no overbearing need to point out her flaws, and without an air of egotism that doesn’t allow Watson to ever near his quality of work. This is an actual team. We’ve seen them forced to rely on each other, we’ve seen Watson act as his emotional support, but now they’re a team and it will be interesting to see where Doherty takes this. Will it continue in the fashion of the original books and make it episodic as per usual, one case per episode with only character moments being serial? Will we ever, ever see Sherlock fail to notice something, fail to solve a case? Who knows but for now my faith is in the show to continue on its run of proving every naysayer wrong.

There will be a two-week break until the next episode and I hope it will come back more invigorated, with a case that even my mind can follow, and some more great character moments.