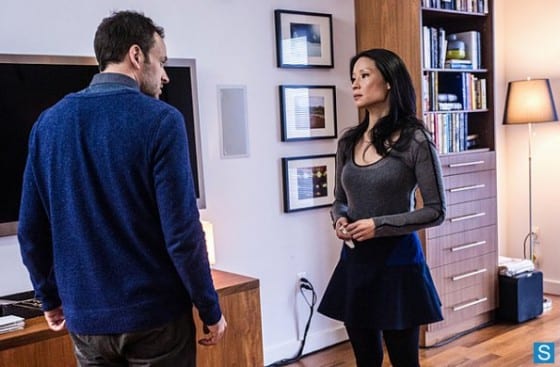 Details in a show can lend themselves to being needless or absolutely poignant in their necessity. What specifics do we need to know about characters in order to connect to them? Do we need any at all if the actor playing them is good enough in their job and creates a draw on their own? In Elementary, Sherlock is always looking for the scraps of evidence, the dust on the floor, the footprint of a shoe, a discarded wrapper that will help with the specifics of the case. His livelihood sustains itself on details. They’re the makings of a good mystery and in this case, they’re the makings of a good episode. Sherlock and Watson are getting closer and she doesn’t particularly know why. There are bonds between characters that have the ability to keep the others afloat, it’s all in the small stuff, the things one doesn’t typically fret about. Yet, in this week’s installment it’s what constitutes a bond, familial, friendship, whatever form it comes in, it’s typically built on the smaller moments of contention, support, and love.

“Details” is a near perfect episode with some drawbacks, but enough character development to boost it into being great.

As the episode opens we’re immediately given a Sherlock who is thoroughly shaken about Watson’s attack in last week’s episode, although he masks it well. He attacks Watson in a ski mask the second she enters their apartment. Joan, flustered, reprimands him and tells him to show his concern in a more normal manner. He tells her she’s going to have to engage in some sort of training to be prepared for their dangerous lifestyle.

It seems this week’s danger is him, his weapons consisting of a tennis ball and a trip wire.

The main storyline centers on Detective Bell, who in the opening minutes is targeted by a drive-by shooting.

The next scene shows the regular crew inspecting the damaged car. Sherlock says that because of Bell’s past successes in the field he’s very likely made himself a number of enemies. Bell tells them that there was a particular man he caught Curtis Bradshaw (Anwan Glover) who they should look into first. Bradshaw, however, has an alibi and is uncooperative with Gregson, Sherlock and Joan.

While the other three are on the case, Bell goes to visit his brother Andre (Malcolm Goodwin) who has just been released from jail. He gives him some clothes, a quick pep talk about staying out of trouble, and it’s the show’s way of giving a previously secondary character some backstory.

Bradshaw is found the next morning dead on the side of a road and the commercial break segway plays it brilliantly by coming back with Sherlock reclining into the dead man’s body. Sherlock deduces that someone is trying to implicate Bell as being the one to have pulled the trigger and goes to his apartment to warn him of such. Gregson says he’s going to have to bench him until it blows over and Sherlock has captured the real murderer.

Let me use this moment to say that Aidan Quinn’s reactionary acting to Sherlock’s antics is wonderful and Jon Michael Hill and Jonny Lee Miller have a great rapport.

Watson is with her therapist again and after talking about her recent developments her therapist advises her that this little adventure needs to end. Watson shuts down because despite the fact that Sherlock’s been overstepping boundaries, she needs him just as much and the idea of leaving the newfound sanctuary is startling.

Bell and his brother meet up again to discuss recent developments and the acting of Jon Michael Hill really shines though. Initially, I had been hesitant in accepting an episode where the main focus wasn’t spotlighted directly on the famous duo, but due to Hill’s performance it was a worthwhile endeavor for the show to take. It allows for the world they’re in to enlarge and give it a greater sense of depth.

He later meets up with Sherlock and Joan where the former informs him of the potential set up and tells him of the gun that had been hidden in his bathroom. They discover at the police station that it was the gin that killed Bradshaw but there are no prints which means that Bell is still a suspect in the case. Sherlock tells him he’s sure he’s not the killer but he’ll need to cooperate for Sherlock to help him. That means access to his apartment for further investigation.

While the two go off to search for clues, Bell calls his brother now thinking it may have been him who set him up. Andre is furious and leaves angry that Bell would ever think something like that about family.

Here’s where the heavy duty writing begins, some of the best handling of script and plot that the series done thus far.

While Sherlock and Joan search for clues she tries to confront him about how he’s been treating her and he tells her that she needs to learn to protect herself. She starts off with saying she’s not a detective but his sober companion which he instantly debunks by saying that she hasn’t been that for a while now and she knows she’s been lying to him ever since he made a phone call to his father.

He tells her he’s not mad and was in fact grateful because she sensed that he was in a trying time and needed her aid. Then he began to fake a more immediate recovery for her sake so that she would feel free to leave, and noticed that she was staying on. This led him to the realization that she was staying not just for him, but for herself as well. So, he hands her a new proposition and says he’d like to welcome her as a partner. He  throws in the clincher that he’s not asking out of some misconstrued need to show graciousness, but rather he’s come to the realization he’s better with her. In the best line of the night he says that not only is he better, but he’s sharper and more focused and he doesn’t know why, but maybe in time he’ll figure that out as well.

It’s the details of the matter. He’s better not only because of her intellect, but because she stuck around when no one else would. She stayed and he’s grateful.

Bell visits his brother to find him shot and bleeding to death with a message spelled out in blood claiming his innocence. Another wonderfully shot moment that portrays Andre’s love for Bell and his need to protect him.

Andre lives, but not before Sherlock and Joan have discovered a loophole in Bell’s story, a woman on the force who holds a grudge for helping his brother. Yet another detail, one that could have helped solve this case much sooner.

Well, it wouldn’t have helped the audience one bit since despite casting it came out of left field. It’s a fellow officer who in a dialogue and expository heavy scene describes her master plan.

The last scenes are started with Bell and his brother who discuss Andre’s act of loyalty. Even though his back was turned, when the shot was fired he always knew it wouldn’t be Bell.

The next is with Sherlock and Joan, and the latter tells him she’s going to join, be paid on Thursdays and he’s going to keep going to AA meetings as well as allow her to stay in the apartment. Lucy Liu kills the scene, bringing that beloved charisma and feisty energy and as she throws a ball in Sherlock’s face as retaliation the companionship takes a turn of compatible livelihood. They enjoy living together and being in each other’s company. And boy, is it fun to watch it play out.

Ninety percent of this episode worked seamlessly, surprisingly so. The bits that faltered were the ones to expect in a show that’s yet to fully shake the procedural structure of storytelling. While I don’t believe it’s going to let go of its episodic outline any time soon, this is a particular episode that would have benefited from a more serial-paced plot, one with an arc. Sure the story about Bell and his brother was touching and acted with ease but wouldn’t it have been better if we met Andre in a previous episode or rather, had gotten more than glimpses of Bell’s character? We had the heavy moment between characters we know very well, Sherlock and Joan, but also with a pair of characters that were only just getting to know and had to instantly connect with.

The serial and episodic natures butting heads contributed with the next problem, which was the way the mystery played out—it didn’t. We didn’t know where it was going, we weren’t given any real hints, it was a crime used for character exposition and what Elementary has managed to do in a handful of other episodes is manage to create a gripping mystery/crime as well as delve into their characters.

Otherwise, yet another wonderfully executed episode.

Love is in the air, roses are being passed around to whomever, an absolutely arbitrary holiday is either being celebrated or targeted with mindless hatred and I’m basking in its benefits with an obscene amount of chocolate by my side. And Elementary, well Elementary has also taken a turn for the sweet and sentimental this week, albeit with less flower petals and kissing. Instead, it wonderfully explored the relationships between characters, and how they’re affected by them whether it is positive or negative. Sherlock and Joan are the heart of the show without a doubt and showrunner Robert Doherty used that to great advantage this week, making sure the set up was platonic but still exuding warmth and managing to perfect the way in which a televised friendship should develop.