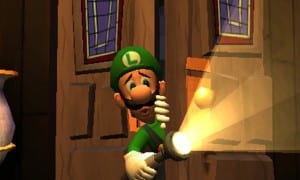 Often overshadowed by his more famous big brother, Luigi is finally getting some love with his own year dedicated to game releases starring the green plumber. Luigi’s Mansion: Dark Moon kicks off the “Year of Luigi” on March 24 and will introduce a whole new portable experience complete with multiplayer modes, new ghosts to find, and lots of spooky corridors to explore. Luigi will also be the star of another game later on this year titled Mario & Luigi: Dream Team, another installment in the Mario & Luigi RPG franchise that will take place inside his dreams.

And while New Super Mario Bros. U already includes Mario’s little brother, an upcoming DLC package will turn the Wii U game into a whole new green experience providing alternate version of the game’s more than 80 stages. Luigi will also be hitting the links with the rest of the Mushroom Kingdom this year in Mario Golf: World Tour for 3DS. Expect both DLC pack and game sometime this summer.

“Luigi is just the green tip of the iceberg of all the great news we have to share with Nintendo fans this year and beyond,” said Reggie Fils-Aime, Nintendo of America’s president and COO. Whether you love him or hate him, Luigi is back in action.