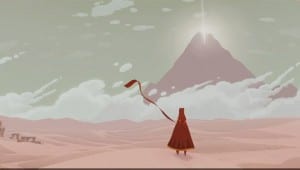 When I think of London, I think of warm beer, lots of rain, and soccer (or football if you’re British). But once a year video games invade the city with the British Academy Video Games Awards. And this year nominations are pouring in for thatgamecompany.

Although the developers just released information that they’ve gone bankrupted, it hasn’t stopped Journey from becoming the biggest seller in PSN history and receiving more and more awards. The award nominations continue for the critically acclaimed game, which is leading with 8 nominations including Game of the Year. Other nominees include Dishonored, Far Cry 3, FIFA 13, Mass Effect 3, and The Walking Dead.

The Walking Dead and Far Cry 3 have also received multiple nominations, including Game of the Year. With all the major marquee titles that 2012 had, many wouldn’t think that games from small publishers like Journey and The Walking Dead would be leading the way. Yet they are, and that is the one thing to take away from gaming in 2012. Gamers didn’t need to drop $60 to have an incredible experience. Similarly, 4J Studios is up for an award for their work on Minecraft Xbox 360 Edition. Other nominated indie games include Thomas Was Alone and Dear Esther. Other blockbuster hits are up for awards such as Mass Effect 3, Assassin’s Creed III, Hitman: Absolution, Black Ops II, and Borderlands 2.

The British Academy Games Awards will be taking place on Tuesday March 5 at the London Hilton. It will be hosted by comedian and gamer Dara O’Briain . The awards will also be streamed live on Twitch.