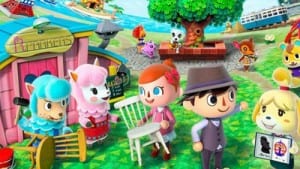 The 3DS is quickly becoming Nintendo’s new favorite handheld, and although the Wii U came out a few months ago, it seems Nintendo is still focused on making top quality games for the system.

Games like Castlevania: Lords of Shadows: Mirror of Fate, Luigi’s Mansion: Dark Moon, Lego City Undercover, and a few downloadable titles like Dillon’s Rolling Western: The Last Ranger, HarmoKnight, and Kersploosh! are all coming out this spring. Animal Crossing: New Leaf finally received a release date of June 9 and games like Mario Golf: World Tour and a 3DS remake to Donkey Kong Country Returns were all announced for this summer. Even the 3DS Virtual Console is getting some love with Game Boy Color games Harvest Moon and Legend of the River King downloadable soon.

And in case you’re still undecided about buying a 3DS, Nintendo is having a free game promotion between March 21 and April 30. There’s even an eShop sale going on now too. It seems Nintendo really wants you to buy a 3DS, and seeing all it has to offer, you won’t be disappointed when you do. Let’s just hope the Wii U doesn’t lag behind too much.