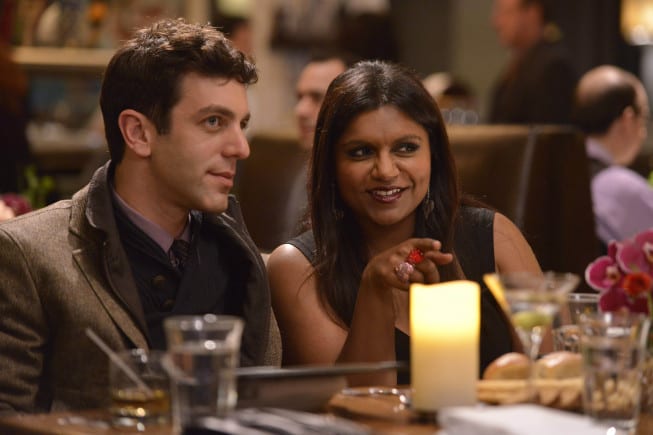 Thanks to the State of the Union address airing next week, we were treated to the Valentine’s Day episode of The Mindy Project tonight. Full disclosure: Valentine’s Day is not my favorite holiday (I have a petty grudge because of its proximity to my birthday—ain’t nobody got time for combo dates), but I thoroughly enjoyed “Harry & Mindy.” B.J. Novak was hilarious as a petty Jaime realizing his true feelings for Lucy, and we got to see the unlikely pairing of Jeremy and Morgan hanging out together, which I didn’t know I wanted to see until it happened.

The cold open was one of the better ones so far, with Mindy waxing almost-poetic about the romantic power of the Empire State Building to the security guard who’s detained her for hanging around suspiciously in the lobby for a few days. She’s trying to meet the man of her dreams, but security thinks she might be involved in a terrorist plot. The whole romantic montage cutting to Mindy being questioned might get old if they do it more than, say, another time, but for now, it’s still funny.

Everyone in this episode has their Valentine’s Problems: Danny’s trying to get over Jillian, Mindy’s trying to figure out how to deal with Lucy and Jaime’s closeness, and Morgan is trying to get a girl at the hospital to “go to the batting cages” with him. What I loved about this episode was that even though romantic failure was experienced by everyone in some form, it never veered into angsty drama territory. Failure is funny on The Mindy Project, and ultimately, Mindy’s failure at achieving her romantic comedy dream of landing the perfect guy is what keeps the show going.

Anyway, Mindy’s main concern is her relationship with Jaime. Lucy meets up with them after one of their dates and it turns out that not only is she a successful criminal lawyer with crazy stories to tell, but she also has a key to Jaime’s place and has stayed there in the past. Red flags on the whole When Harry Met Sally front, which is exactly what Jeremy and Danny tell her later. Mindy ends up roping Danny into a date with Lucy as a sort of distraction, both for Lucy and for Danny, who Betsey found that morning on the floor of his office in a post-breakup drunken stupor. It’s a minor detail, but considering my love for the Thanksgiving episode, I really enjoyed Mindy calling Danny out on the nights he spends in his office drinking beer and plinking out Billy Joel songs on his mini-keyboard.

It was weird to see Jeremy and Morgan forced together in tonight’s subplot, but they grew on me by the end of the episode. Jeremy, who has no Valentine’s Day plans because he’s not into committed relationships, resolves to help Morgan out with his failed attempts at flirting. His coaching is so effective that Morgan falls for his charms before he realizes what’s happening, and to everyone’s surprise, Morgan replicates the process to relative success. Sure, it’s awkward to watch Morgan not be as smooth as Jeremy, and sure, it’s awkward to realize now that I never caught the woman’s name that he seduces, but when it turns out Morgan really wanted to take her to literal batting cages, it gets cute again.

It gets even cuter when Jeremy goes with Morgan to the batting cages and they have a good time. I am on board with this friendship for sure, and I probably wouldn’t have said that even an episode ago, so good job on that, Mindy Project. I hope there’s some follow-through on this, though, because I was also super on board with Jeremy and Betsey being real friends (okay, maybe I’m on board with them being more than friends), and we haven’t seen them together in ages.

Danny shows up early to Mindy’s apartment to meet her for their double Valentine’s date with Lucy and Jaime and thankfully talks her out of wearing whatever relatively gross-looking red dress she’s currently wearing. Mindy is gorgeous, but that dress looks like it’s made of plastic. They toss back tequila shots, Mindy toasting to love and Danny toasting to sex with new people. If anyone ever asked me to explain these two characters’ differences in ten seconds, I would just point them to that clip.

Their double date is predictably and amusingly disastrous: Danny practically has a breakdown when he sees the giant fish on the wall that Jillian used to study, Mindy can’t get a word in edgewise around Danny, Lucy, and Jaime all sharing food and talking together, and Jaime ends up self-Heimlich-ing on a parking meter outside when he finally takes a bite of Mindy’s fish. It was fun to see the passive-aggressive jealousy that B.J. Novak had been so good at as Ryan on The Office (that’s the last time I compare his characters, I swear) come out here as Jaime realizes he doesn’t want to see Lucy with another guy.

His realization isn’t complete until Mindy confronts him at the Empire State Building. She can’t bring herself to go up to the top for a romantic moment if he isn’t the right guy, so she asks him about Lucy. He denies it at first, as all members of the just-friends-but-secretly-not trope do, but when Mindy asks who he’d want to see on Death Row and he says Lucy, he realizes he loves her. I’m actually glad that Mindy had enough strength to hold out for her real Empire State Building dream guy and was mature enough to help Jaime be happy instead of forcing a relationship with him. Good for her, I don’t know if pilot episode Mindy would have made the same choice, so it’s nice to see that character growth.

Jaime practically Singin’ in the Rains his way down the street as Mindy walks on the sidewalk like a normal person beside him. Jaime’s joy is momentarily dashed to pieces when he sees Danny and Lucy kissing on Mindy’s stoop, but then the big confession of love from both of them comes out and their personal romantic comedy plays out in the background as Danny and Mindy try to negotiate their way out of the situation. I wasn’t sure how I was going to feel about Jaime and Lucy realizing they love each other (because, hello, men and women can be friends) but I was pleasantly surprised to see The Mindy Project acknowledge the trope while placing our main characters outside it. It’s not quite as romantic when you’re not invested in the pair confessing their love, and it was refreshing to be removed from them for once.

Instead, we get to see Danny and Mindy finishing out Valentine’s Day at Danny’s favorite pizza parlor. He tells her that you can’t plan a place to be romantic and shows her the carving in their table of his and his ex-wife’s names. Aww, Danny has a heart. He also has a point, because I spent the whole episode wondering in the back of my head what can possibly be so super-romantic about the top of the Empire State Building. Maybe that’s my fear of heights talking, because Mindy is still holding out for her dream there. Overall, it’s a sweet moment between the two of them, and it’s obviously a set-up for them fulfilling their own romantic potential somewhere down the line (if it doesn’t happen in some form, I will be genuinely surprised), but I don’t hate it. And for that, I think the writers deserve a lot of credit for diligently humanizing Danny over the course of the season while still keeping him in character.

This episode is tied with “Thanksgiving” for my favorite thus far, so clearly The Mindy Project has a way with holidays. Maybe there’s a Saint Patrick’s Day one to come? Either way, this was a highly enjoyable pre-real life Valentine’s Day episode, and in the spirit of that, I wish you all Valentine’s Days that turn out better than Mindy’s!

Lucy: “All the guys I meet are either 19 year old murderers or 80 year old judges.”

Morgan, about his red scrubs: “Well, it’s Valentine’s Day and it hides the blood.”

Jaime: “I’m not jealous of a guy that wears bootcut jeans, okay?”

Mindy: “For the record, there is no kissing on my stoop, that is a direct quote from my super.”