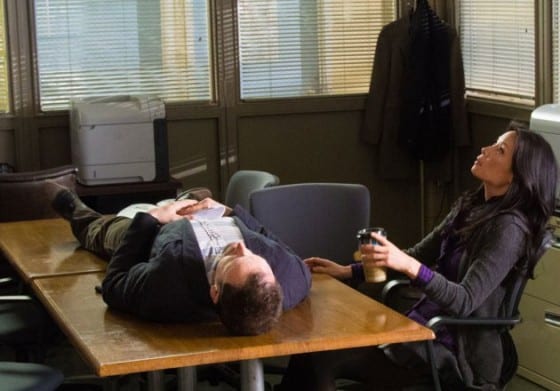 A lot of leg, a lot of breasts, and a lot of writhing around in the opening thirty seconds of last night’s post-Super Bowl episode of Elementary. Sherlock has seemingly hired two prostitutes to help relieve some stress and they dance and grind and handcuff him, also shirtless, to a chair. It turns out that this is just an elaborate setup to arrest the two for robbery of their last few clients. Sherlock slips out of the handcuffs (a nod of continuity from a couple episodes ago where he was teaching himself how to escape them), and call in the police.

The scene switches to police escorting a convict to a hospital so that he can aid in a kidney donation to his sister dying from kidney failure. The scene is ominous is tone, keeping the convict subdued and quiet. Everything is fine until he’s lying on the operating table, supposedly sedated, and the police officer undoes the handcuffs so that the doctor can sterilize the entry site. That’s when one of the surgeons notices that there is something wrong with the IV and the convict attacks, grabbing a scalpel and stabbing two and taking out a gun to shoot another. Its grizzly and it’s shocking and although I could tell that the plans of peaceful surgery weren’t going to go as planned, I also didn’t expect to see a throat being slit.

After having my television on mute for the four hour game—only turning the volume up for the Iron Man and Star Trek trailers and Beyoncé—it was a nice, if not startling shock to my system, and I imagine to most of those who were watching at such a late hour. They caught the attention of the viewers and made sure they kept it.

I expected some form of over-glitzy, highly-stylized storytelling for the night since the mission was to capture an audience who may or may not be either celebrating or mourning for their football team.

And so the average intoxicated football fan was given breasts and violence as a means of bait. Was it worth it? Yes. Elementary wasn’t in top form and while much of that could be due to the obvious grab of attention, it was still a worthy episode that showcased some thrilling moments of tension—a technique that’s this show is often devoid of—and character growth that is thrilling in itself.

It’s worth noting that the show chose to open with Sherlock, rather than introducing the villain of the week first, making sure that viewers know who the actual star of the show is and who the most importance lies with.

The commercial ends and we’re back with Sherlock and Watson at the macabre crime scene, delicately walking from one body to another, observing and deducing. It’s telling just how long Watson’s now been with Sherlock that she barely flinches at the scene in front of her, her having grown accustomed. They learn that the killer is Martin Ennis (played by a wonderful Terry Kinney from shows such as Oz and The Good Wife) who has a past history of murders, all of which fit the same criteria of female, blonde and around 5’7. He’s left a message on a wall that says “Shedir” which is a star constellation.

To Sherlock’s utmost disdain he learns that since it’s a serial killer the FBI has been called onto the case as well, including Kathryn Drummond played by Kari Matchett (Covert Affairs, Leverage.) He, to put it lightly, harbors some extreme loathing for this woman. He says it’s because he cannot stand profilers, people who presume to know everything about an individual, past and present, due to some character quirks and familial interactions. It’s easy for the audience to deduce that there’s more to them than he’s saying. However, the Ennis sister is pleased, saying that she knows Martin best.

Watson’s subplot while lighthearted is silly and a nice tonal shift to the dark murder storyline. She goes to check in on her subletters at her apartment only to discover that they’ve been shooting pornography, proving that subletters are more often than not a nuisance rather than a saving grace (bane of my existence). Sherlock asks her why she doesn’t just chose to be a “wandering nomad of sobriety” and live off of the clients she takes in, especially since it means she could live rent-free in an expensive city. She says she likes the normalcy and knowing that there is a home to return to.  This scene is wonderful in its quiet exposition, especially since it finds Sherlock lying atop a table and Watson taking no notes, just accepting it as normalcy. It also showcases how the friendship has grown as the discussion takes on a more conversational tone with banter and questions coming from each end rather that Watson simply inquiring about his feelings and deductions. This leads to Watson asking about Kathryn and Sherlock admits to having had slept with her in the past but only due to sexual need, not because of an emotional attachment.

They’re called to the station where Sherlock tells Captain Gregson that he believes the killer is being too alluring, too interesting and is purposefully putting on a show for the NYPD. Kathryn apparently agrees and says they should be careful about how they tread with him. This transitions to a shot of Ennis in a drugstore, sweatshirt pulled up and over his eyes. He pulls out a gun just as a tall, female blonde turns around and quickly, in a very effective scene, crumples to the ground in fear, holding her hands up in self-defense. Instead, he shoots the cashier and a random customer and asks her to take a picture of him with his face next to his mugshot. He killed everyone but the person who fit his profile.

Sherlock notes this as they arrive on the scene as he and the team grow more frustrated at their failing to catch Ennis before more killings happen.

In her subplot, Watson confronts her subletters where he tells her that he just needed money. Watson proceeds to kick him out since she’s been threatened as well of eviction. She heads home to where Sherlock is up and waiting. She confronts him about Kathryn and tells him that she knows that she wrote a profile on him, predicting his self-destruction and drug use, calling him a unique intelligence that would ultimately derail. He’s angry because she foresaw his future addiction while he did not. She had used him to write an interesting case study and it stung.

The next day, Gregson is angry because his team is doing everything they can yet the two specialists, Sherlock and Kathryn, can’t seem to discover anything. Sherlock tells him that Ennis is purposefully trying to confuse them. That’s when Ennis calls the NYPD to talk to Gregson. Sherlock tells him that he knows he hates Kathryn because she took the mystery away from him, made him feel average and easily read.

Ennis recognizes Sherlock’s voice and tells him he hates Kathryn not only because of that but because she destroyed his family. When she accused his family of sexually abusing him as a child and that leading to his demise it ruined his parents, his father committing suicide shortly after her book being released. His mother never recovered and died a year later. He says that he will stop the killing if they give him Kathryn.

His phone call leads them to the room where he left a bunch of “mementos”—article clippings of his past murders, all of which is to taunt the crew, and it works. Sherlock confronts Kathryn and blames her for what’s happening, her having given Ennis an incentive to escape and put on a show for her.

When at home, Watson brings up Kathryn’s case study on him once again and tells him she was wrong. She says that yes he got lost for a while in drugs but he also got clean, picked right back up with his career, and even made a friend despite Kathryn stating in her piece the implausibility of such an accomplishment.

And yes, Watson means that she’s the friend. (Yes, I did emit and “awe” at the scene, it was cute dammit.)

The next morning Sherlock wakes her up by throwing clothes at her to wear, saying he’s in a hurry because they’re going to Ennis’s sister’s apartment to investigate. It’s a brief scene, but it’s funny, and again helps offset the dark material of the rest of the episode and showcases their comfort.

Once there, Watson gets to use her investigative skills and notices that all of the food she had wouldn’t typically be in a house of one who is suffering from kidney failure. They realize too late that she was purposefully poisoning herself in order to aid her brother. At the hospital, Kathryn in confronting the sister to apologize for derailing her family’s life and for lying in her book, and it’s then we get a shot of the scissors in Ennis sister’s hands. Kathryn is wounded but not killed as Detective Bell runs into the room. The sister is happy and doesn’t care now about death because she’s done what she needed to.

Ennis radios in one more time and that is enough for Sherlock to get a trace on him and meet him at the apartment he’s staying at. A+ to the cinematography crew for this one, because the room immediately sets an eerie tone with its clutter and shadows, with Sherlock traced in light and Ennis’s face almost entirely hidden. Sherlock plays with Ennis’s mind, telling him that he shouldn’t be a statistic like Kathryn wishes him to be and shouldn’t play into the role of a coward. Ennis takes heed and lunges for the gun on the table in front of him just as Sherlock hits him (viciously I might add) across the head, making him fall to the floor.

Gregson turns up with his team and the tension from the previous episodes remais, with Sherlock asking him to wait before punching or suspending him. He said he needed to confront him to try and figure something out. When Gregson asks him if he has he says he doesn’t know yet, but in the future he’ll see.

Because although Sherlock has gotten clean, he still worries that he’ll fall back into old patterns if his mind that never turns off will succumb to the need of drugs to dull the senses that overwhelm him. It’s a scary thought and it keeps him on his toes.

Watson resolves her problem by telling the landlord that she knows she was in the room when the pornography was being shot and tells him that she will be reimbursed or he’ll be charged with the filming of an unlicensed film. Lucy Liu is fantastic and hilarious in this scene.

The ending is sweet, with Sherlock gifting her with a new spatula to replace the violated one used in the X-rated film. It allows Liu and Jonny Lee Miller’s chemistry to shine through and for the audience to glimpse inside a developing friendship more fascinating the cases themselves.

Not without its faults. this episode did what it needed to. It entertained and kept me laughing or recoiling from shock. I was pleased to only have to wait three days between episodes and now can’t wait until the one on Thursday.