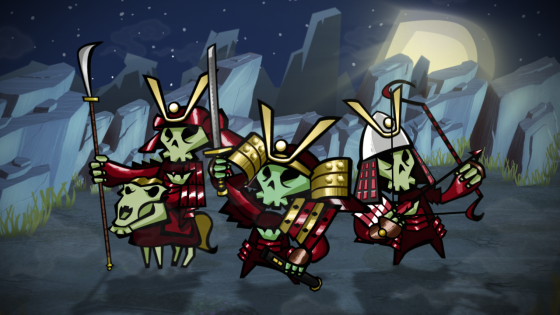 Some games get million dollar advertising budgets, posters in Times Square and Superbowl Spots. The publishers want to make damn sure you hear about them. Then there are the other types of games — the ones you hear whispers about at trade shows, see people posting about on forums and hear more and more about through word of mouth. Skulls of the Shogun, 17-Bit’s new quasi-strategy/action game is distinctly the later, but it’s also the type of game that distinctly deserves to be in the former. It’s deep and full of content but at the same time – -it’s quirky and accessible for those looking to jump into the genre head first. There are a few uneven difficulty spikes throughout the game, but don’t let that stop you from your latest obsession.

Things don’t start off too well for players in Skulls of the Shogun — it starts with their death. Assuming the role of General Akamoto, you’re stabbed in the back and wake up on the shores of the afterlife, where you’ll quickly learn that the respect you had in your life means nothing. It’s the player’s task to assemble a ragtag group of lost souls and earn the title of Shogun…but you know..of the dead. It’s an interesting tale that takes players to some interesting places. The visuals feature a distinctly Japanese woodwork like style, and each stage takes places during a season, allowing for some truly dynamic visual experiences. It’s charmingly and at times so gorgeous that its breathtaking.

At first look, Skulls of the Shogun is a rigid strategy experience, but looking deeper, you’ll find what makes it so special. Where most strategy games confine player movement, Shogun features no grid whatsoever and allows players free movement. You’re free to use up any or even all of your squad’s attacks per movement, meaning that you’ll be free to plan your attacks as you see fit, just don’t expect them to always work in your favor. All of this is introduced to the player through quirky writing and pacing that allows for new players to learn the ropes of the game — and the genre quite easily.

Then everything changes. Shogun may do a great job teaching the basics to players, but then it assumes you get the hang of it and throw everything at you. Skulls of the Shogun is full of some of the most interesting hazards I’ve seen in a strategy game like this, and while it does make the game fun — it also ramps up the difficulty quite quick, which might be a little deserving to players new to the genre. That’s not to say though that you should let that turn you away from the game, failing and having to rethink your plan of attack on the eventual route to victory is incredibly satisfying. 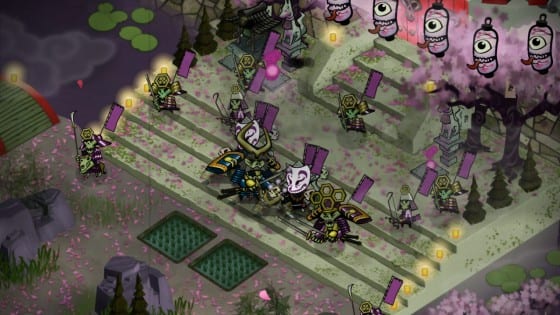 Matches in Skulls of the Shogun can get quite hectic.

Of course, you’re going to get the most enjoyment out of Skulls of the Shogun playing against real people; be they in the same room or online. Games can get quite competitive when two players really know the game and devote a decent amount of time to creating a strategy they think will work. Interestingly enough, the game allows for not only simultaneous multiplayer, but also old school turn-by-turn multiplayer that allows for play across multiple platforms, like Xbox 360, PC and Windows 8.

There could be more to Skulls of the Shogun — more upgrades and more customization options, but as it stands, the game features a remarkable amount of depth that for the low purchase price, is more than fitting. At best, it’s a distinctly impressive start to what could be a remarkable new franchise.

Skulls of the Shogun is an interesting title. It holds its own as a worthwhile, challenging and fun turn based strategy game, while still feeling completely accessible for those new to the genre. Its dynamic in its visuals and score but it takes a quick turn towards the more difficult midway through the game that those new players may not be ready for. Still, Skulls of the Shogun is just deep, accessible and quirky enough to become your new obsession.