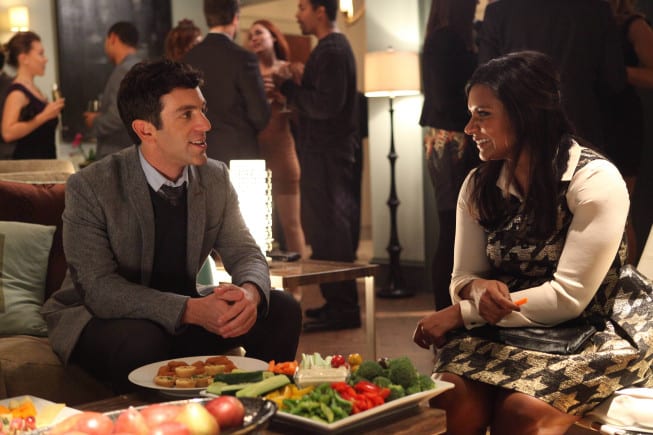 I didn’t realize that I had missed seeing B.J. Novak and Mindy Kaling together on The Office until they reunited for this episode of The Mindy Project. Good thing the narrative left their relationship open for more, because I want his character Jamie to come back right away.

I know her and Brendan’s relationship went pretty far south by the end of the episode, but the cold open of him finding crazy things in her bed after an unexpected night together cracked me up. The kitchen knife she keeps under her pillow makes extra sense after we got a glimpse of her anti-murderer preparations in “Hooking Up Is Hard” last week.

When Brendan declines her invitation to an old friend Colin’s cocktail party, Mindy goes with her best friend from college that we haven’t met before, Maggie, a brash elementary school gym teacher who’s currently wheelchair-bound from a broken femur. How her femur broke is never explained, but I’m thinking that’s a gym class far more hardcore than anything I ever suffered through as a kid. Speaking of injuries, Danny’s girlfriend Jillian is present as well, now eyepatch-free and extra gorgeous with two eyes visible.

Relationship tension abounds as Maggie corners Jeremy to hit on him, Danny makes his own sandwich and brings Jillian the wrong drink, and Mindy laments to Colin about the lack of single guys at his party. Until she accidentally steals an appetizer off Jamie’s plate and they banter cutely before he asks her out, that is. The catch is that he has a super-close girl friend, Lucy, emphasis on the space between “girl” and “friend.” But he’s objectively cute (sorry, B.J. Novak isn’t quite my type), is a Latin professor, and has a similar sense of humor to Mindy, so she ignores the best friend literally sitting on his lap and agrees to a date.

In a stunning display of chick flick knowledge, Danny and Jeremy tell Mindy the next day that they think Lucy and Jaime are actually meant to be together, like in When Harry Met Sally. In fact, they both thought they were already a couple. I hate the whole opposite-gender-best-friends-who-end-up-together trope (with one giant sentimental exception for Ron and Hermione), so I’m glad to see The Mindy Project take it on in some capacity. It’s not exactly groundbreaking, trope-busting material we get here, but at least Jaime and Lucy don’t end up together automatically so that’s something, right?

Mindy’s date with Jaime actually goes pretty well, and we all get to bask in the Kaling/Novak friendship for a few minutes. Lucy sends them a bottle of wine which, okay, is actually weird considering she isn’t in the restaurant with them, so Mindy’s concern is pretty justified here. When Jaime takes a call from Lucy and starts to ignore Mindy, she heads over to Brendan’s for a booty call instead.

Over in B-plotsville, Jillian breaks up with Danny because it’s just not working out. They’re both different people, and he doesn’t really listen to her, which is a more than fair assessment of him. I don’t think Danny has listened much to anyone, probably ever. Morgan, Betsey, and Mindy try to cheer him up, and they suggest a grand romantic gesture to win her back. Mindy tries using rom-com examples, but eventually has to settle for Goodfellas because Danny didn’t know what she was talking about. He ends up going with Morgan to the Oceanography Institute where Jillian works and fails miserably at making a grand speech to win her over thanks to a lethal combination of the wrong music and a petulant sea lion. And, you know, Jillian having made up her mind about not wanting to be in a relationship with him, because that’s the important part these grand gestures always seem to overlook.

Mindy and Maggie, after a heart to heart about Mindy’s current love life, run into Brendan at the movies. Just when Mindy thought maybe he could become boyfriend material, it turns out he’s on a date of sorts with somebody else. He says she’s just a refugee he’s helping acclimate to American culture, but I think we all know it’s a date. Mindy throws movie theater snacks at him until he rejoins her in the lobby in the middle of the movie to discuss their relationship.

Brendan apologizes for upsetting her, which is admittedly nice of him considering his follow-up apology is for making her think he was her boyfriend in any capacity. Poor Mindy, always betting on the wrong boyfriend candidate. I’m really glad that Brendan didn’t make out like Mindy was dumb for having thought their relationship was something it’s not; he took responsibility for anything he might have done to mislead her. I did not expect him to be as gracious about an admittedly harsh conversation as he was, and I’m glad Mindy was written as the sympathetic one and that this wasn’t played off at her expense.

When Mindy shares how this all turned out with Maggie, she suggests Mindy go pull a grand gesture on Jaime to get him back, since he was actually interested in a relationship. Sure enough, Mindy shows up to his office hours – where he’s teaching Latin verb conjugations using a guitar, which, hello, I would go to more study groups if they were musical – dressed as Indiana Jones per their earlier conversation and asks him out again. So two reasons to be happy: one, B.J. Novak will be back, and two, maybe Mindy can have a relationship that works out for her, though given the premise of the show that’s probably unlikely. All in all, this was another decent addition to the string of entertaining episodes The Mindy Project has been giving us in this half of the season.

Mindy, about the Nixon mask in her bed: “I eat popcorn out of this when my bowls are dirty.”

Theater Employee: “Don’t worry about getting tears in the glasses, we sanitize them weekly.”

Mindy: “I’ll see you in the Temple of Doom. That’s what I call my apartment.”