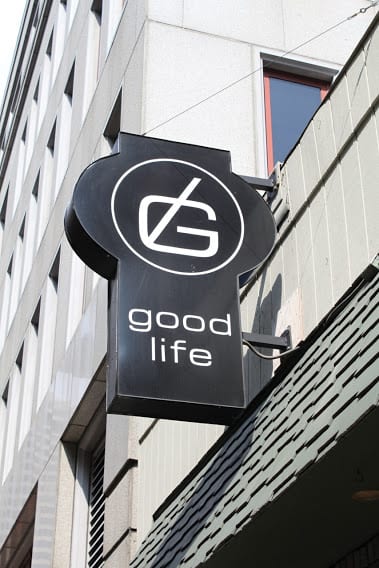 From the birth of a nation, to civil unrest, to a never-ending Big Dig, the great American city of Boston has experienced its fair share of changes. But over these past 384 years, one thing has remained the same: denizens of Boston love getting together over a pint. And while Good Life on Kingston Street is one fine example of a local Bostonian watering hole, on Tuesday nights the atmosphere is a little different than that of your average pub. Statistics discussed over the clanking of bottles and barroom chatter are less likely to be about sports, and more likely to be that of characters and weapons.

What started as a relatively small get together among friends 14 months ago has snowballed into what The Boston Phoenix recently dubbed the “Best Nerd Gathering” in the city. Every Tuesday evening, the downstairs section of Good Life plays host to Game Over, an event most definitely created by and for gamers of all types. Starting around 5 p.m., televisions come alive with red shell attacks and “Hadoukens”, and every flat surface in sight supports a card or board game.

“Our most popular game is probably Magic: The Gathering,” says Game Over creator Scott Trano. “We get 40 or 50 people just for Magic.” Although the more rambunctious games like Goldeneye and Rockband remain downstairs, it doesn’t take long before Game Over completely transforms the atmosphere of the entire bar, both upstairs and down.

“I’d say about 75% of the people upstairs are ours right now,” Scott mentioned while standing between a game of Dungeons & Dragons and an uproarious 4-player bout of Super Smash Bros. “Past 8 o clock, the whole bar is ours.”

“I mean, where can you go and play video games and drink with a whole bunch of people?” asked one Game Over regular. “I’ll come here and play N64 games and occasionally the Wii,” he said, “but I primarily come to play table top games like Magic, Saboteur, and Resistance.”

After discovering it on Reddit back in October, one attendee admitted that he often stops by after work to blow off a little steam with some Super Smash Bros. “That’s all I played in college,” said the 22-year-old software developer.

Unfortunately, the future of Game Over in Boston may be in Jeopardy.  A recently enacted law initially intended to curb college binge drinking has made “any game or contest that involves drinking” illegal in Massachusetts. Whereas the law doesn’t actually define what constitutes a drinking game, it can be applied arbitrarily to any sort of barroom activity such as pool, cards, or even darts.

“It’s worrisome. Friends of mine and colleagues have been shut down and fined for absurd things,” said Scott. “Game Over is a bunch of 20-something and 30-something professionals that come together to play board games and card games and Street Fighter, and Super Smash Bros. It’s not like we’re sitting here and playing beer pong.”

When asked about the future of Game Over, Scott sounded optimistic. “If Boston isn’t going to be hospitable to us, then that’s their problem,” he said. “We could go anywhere we want after this. We’ve had six months of great success. I don’t think it will ever be the end of Game Over. Maybe we won’t be in Boston anymore, but we will not die because of some new law that is completely ambiguous.”

While some consider gamers to be solitary introverts, at its core, gaming is actually one of the most social activities in which people engage. The Internet’s arrival did allow gamers to be more social from a worldwide perspective, but at the same time, it unwittingly isolated us, populating our friends lists while leaving our extra couch cushions vacant. Unlike sports fans, we don’t often find places we can go to bond with complete strangers by rallying behind a team or cause. Game Over is so special because it provides a physical place we can go where, regardless of differences, we share a significant commonality with everyone around us.

So if you ever find yourself hankering for a game of Magic, a round of Goldeneye, or just some nostalgic reminiscing over a few beers, check out Game Over, at Good Life bar, 28 Kingston Street, in Boston. For more information on events, check out the Game Over Facebook page.