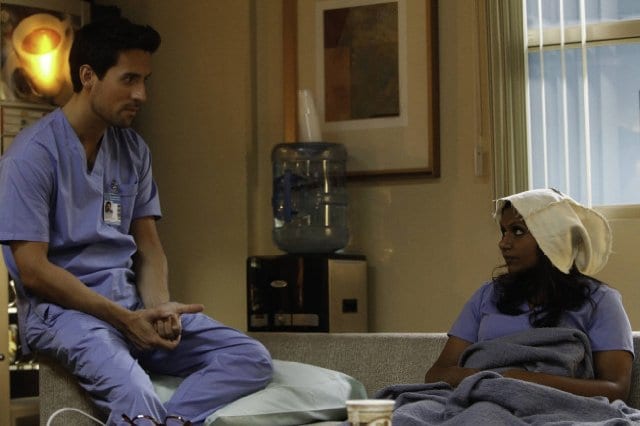 I would first like to commend this episode for momentarily easing my crippling fear of villainous potato sack masks; that cold open of Mindy sleeping in one to ward off potential murderers in the hospital is one of the funniest things I’ve seen so far on the show. Jeremy and Danny’s reactions to Mindy’s extreme and irrational method of defense (Is it bad that I don’t actually think it’s that irrational? Don’t answer that.) are also hilarious; I can’t stop giggling about Danny throwing his chart in fear. That’s where this episode excelled for me tonight: the physical comedy was very well done. It can be hit or miss on this show, but I think Mindy knocked her slapstick scenes out of the park in this episode.

The upshot of the lounge incident besides the revelation that Mindy sleeps in a mask to protect herself from would-be murderers is that she decides she wants to try having a casual hookup with somebody in lieu of trying for another serious relationship. She’s not sure how to go about it, which leads to awkward conversations with Jeremy, Shauna, and Morgan as she tries to learn to initiate a hookup situation.

In what was blatant foreshadowing that I just didn’t notice, the midwife brothers Brendan and Duncan are down in Danny’s office to meet about the leak caused by their broken water birth tub. Mindy ends up in the elevator with Brendan and takes the leap, asking him to “hang out” at his place tomorrow night. I would have never pinned those two for any kind of hookup, but I’m sure they’ve already been “shipped” elsewhere on the internet. It made for strangely entertaining awkwardness at least.

At the hospital, Eye Patch Girl (whose real name is Jillian) shows up looking for Danny. Mindy makes some pointed comments about how young she is compared to Danny, and Jillian suggests the kind of date that makes Danny’s skin crawl: audience participation-heavy avant-garde theater about The Golden Girls and 11 PM sushi reservations. But she’s very pretty and he likes her, so he goes along with it. I like that Danny at least tries to think about going out of his comfort zone for her, even though he ends up faking a hospital page to bail while they’re on the subway. That character development of his that has been sneaking up on us seems to be happening faster and faster lately.

Before she heads over to Brendan’s, Mindy makes a just-in-case video blog as a last note in case her one night stand murders her, complete with casting directions for anyone making a Lifetime movie out of her case. She gets dolled up (and looks gorgeous, by the way) only to have Brendan answer the door just wearing sweatpants. They flirt, they almost get into a fight over an anti-epidural piece he wrote, and Mindy gets attacked by his smart shower as he strums an acoustic cover of “Landslide.” Mark Duplass never struck me as the type, but damn his singing voice is beautiful. Why are people more attractive when they’re musically talented? Has someone done that study yet?

Anyway, after Mindy extricates herself from the shower and the Mark Duplass fandom doubles, she tries to act on the advice of her friends and undress him sexily. It’s wonderfully awkward, and the moment is only bettered by the arrival of Morgan and Duncan with pizzas in hand. Morgan assumes Mindy and Brendan are dating because he thinks she’s too good for casual sex with people, and gets upset when she sets the record straight. He agrees to keep it a secret as long as Mindy doesn’t tell Danny he’s been hanging out with Duncan. I know Morgan’s kind of an odd duck character, but I like him more and more as the series goes on. He says weird things (not all of them funny), but I like that Ike Barinholtz gives him a touch of earnestness and genuine concern. Morgan could have easily become a cariacature, and while he’s not fully fleshed out all of the time, he’s never been too badly written or played to become one.

The four of them end up watching a movie together, and Mindy decides to leave after arguing with Brendan about corn syrup in candy. She stays when Morgan starts having an asthma attack and tries to help Brendan talk him down when the inhaler is empty. Though they bicker throughout, eventually Brendan gets Morgan relaxed enough to breathe normally again and all is well. Side note, I would so watch an episode that mainly focuses on Morgan and Duncan hanging out and being weird together.

The B-plot gets wrapped up when Jillian finds Danny being soundly beaten at Uno by Jeremy in the lounge. She calls him out on bailing because he didn’t like the plans for the night, and she tells him his age doesn’t bother her, although he’s 38 to her original belief of 32. They kiss and are generally cutesy and I find myself hoping they work out, at least for a while. Mindy and Brendan end on a good note too when she thanks him in the elevator for helping Morgan. Brendan maintains that they will end up having sex, and they both smile to themselves in the last shots of the episode.

I didn’t expect them to end up together in any sort of capacity, and I have to say I’m pleasantly surprised at their chemistry. Kaling and Duplass play the whole slightly awkward/perpetually in disagreement/but definitely attracted to each other thing really well. I doubt anything major will happen for them in the next episode, but I am definitely interested to see how things go. I know this is another 4-star review in a row, but I think the episode deserves it. It’s not as good for me as “Thanksgiving” was (that one’s still my reigning favorite), but the physical comedy and the new plot developments were particularly fun to watch this week.

Favorite Lines from “Hooking Up Is Hard”

Jeremy: “The key, Mindy, is to find a man who you’re attracted to but you don’t respect and you can’t see a future with.” Mindy: “Draco Malfoy.” Jeremy: “Someone not fictitious.”

Mindy, about Danny’s apartment: “In my mind it’s like a smoky speakeasy where old men go to complain about technology.”

Morgan: “Ironically, the guy who played Happy hung himself in his cell. Did I use ‘ironically’ right?”

Mindy, to Morgan: “Why do you have a mannequin’s head and Bossypants in your duffel bag?”