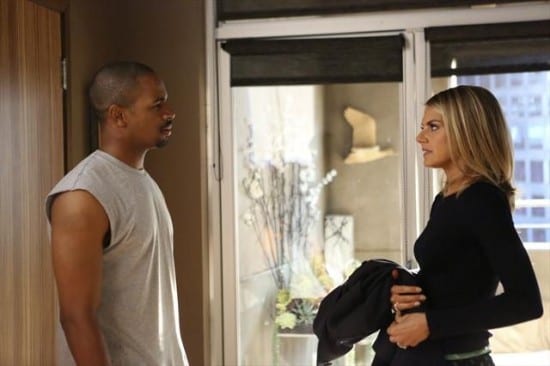 And the best line of the night goes to Jane in the opening skit. “You can’t have disposable income when you owe us 11,000 dollars….and three cats.” This was to Max, as I’m sure you all could assume by the lack of context alone.

What is one supposed to do when during an episode of a television show you’re constantly toting as being “one of the best comedies on air today,” you don’t laugh once…not even a chuckle or a sympathetic smile? Do I blame myself and my poor sense of humor? Do I contemplate the reasoning for why an episode with so many legitimately funny moments goes amiss? It was standard Happy Endings: it had the wacky group encounters, one friend ripping into another, awkward moments galore, and petty fights that turn into rivalries. Just another Tuesday night with the gang which showcased well-timed jokes, some breakage of the fourth wall, and fine comedic acting especially by Adam Pally and Elisha Cuthbert.

So why didn’t this episode work for me? I can’t say I didn’t like it, but it was unmemorable and for a show that’s main drawing point is its novelty and capability in surprise, lacking any spark or charm can be its undoing. Happy Endings, or any show that’s rapidly losing viewers and substantial backing, needs something special that draws in an audience to watch each week.

I’m making it sound like I hated the episode. which isn’t true. When I turned off my television I felt no emotion towards it other than disappointment that the thirty minutes made me miss New Girl.

How do you rate an episode that was “meh” all the way around?

To be fair, there were things I liked.

I liked Dave, for instance. I know! Who knew? He was funny, they wrote him to have some actual intelligence despite the dubious way in which he was using said smarts, and he still managed to play like Dave typically would. Max had gotten a new roommate and had vowed to not grow attached like he had with his old one—Dave. This doesn’t last long upon arrival to his apartment. Alex, Max and Dave stare in awe and admiration as they take in the well-furnished living room, the attractive woman that walks by followed by the attractive man, Chase, Max’s new roomie.  The trio stakeout and wait until Chase, their new, cool potential friend, is back, and when he doesn’t return, they begin their own version of a detective case. Initially, Max and Alex take control, allowing for the wonderful comedic chemistry between Cuthbert and Pally to shine as they play their characters to their silliest. However, it’s Dave who’s the mastermind despite his lack of mastering the slow swivel turn in the chair, or the suave aura that the other two are convinced they exude. He goes through Chase’s phone and calls a girl who’s been calling him. They then see that his bank account has recently been used for a restaurant. They track him down and confront him and find out that he’s with his wife, his wife didn’t know about the apartment, and that he was using it to have affairs with other women. Thus, severing the ties not only with Max but also with his wife and his job since his father-in-law was the one who got him the job.

This is a storyline done right. Sure, it’s ridiculous and inconceivable as an actual event that would take place in everyday life but what is this show without its spectacles and absurdities. They may not being grand, but they’re ridiculous.

Now on to the Penny storyline. It’s like any other Penny storyline—a little obnoxious but endearingly her. Her boyfriend wants her to hang out with his friends for a change, and at first she doesn’t quite comprehend the idea. Who wouldn’t want to hang out with her group? She relents and goes with him to a get-together and is suitably out of place. When a girl spills a drink on herself she begins to laugh and making jokes at the girl’s expense until she realizes that no one else is doing the same and is instead helping her clean up. Penny asks if it’s not normal to pile up on a friend when one embarrasses themselves. Apparently not she’s told, and in Penny’s desperation to have people like her she offers to help clean the girl up, give her shirt, pour a drink on her own shirt out of solidarity, and pay her one hundred dollars. Nothing’s worse to Penny than being the odd one out, even if the group she’s trying to get into is dull and too conventional for her tastes.

Later in the get-together she begins to get texts about the mishaps of her other friends’ days and persuades her boyfriend to leave with her for ultimately a more entertaining time. At least Penny being demanding and mildly grating is in character. This leads me to:

I know, I can’t believe I’ve typed it either, but the fact is that despite Damon Wayans Jr.’s immense and quite frankly, intimidating charm, even he couldn’t save the train wreck of Brad’s characterization tonight. It begins with Jane inviting an ex over for dinner, which he isn’t cool with, until he finds out that said ex is a woman. Now he’s all in. (I’ll get to the once again fetishizing of lesbians in a moment.) However, once at dinner, when it’s mentioned that love was involved, and not just simply the fantasies of two girls going to town with enormous amounts of sexual chemistry, Brad once again turns into a brat, stomping his feet and chasing the ex away. That is until he plots a revenge dinner where he brings along one of his ex-girlfriends as well who, who would’ve guessed it, turns out to have been a lesbian all along as well.

They kiss, make up, tell each other that they’re each other’s one “true” love, and call it a night.

But not before the extra titles scene where Brad unleashes his inner perv and ogles at the girls making out in front of him.

Listen, I get it. I get that two attractive people making out is nice to say the least. I understand that everyone has something that they find attractive to themselves. It’s been drilled into my head since I had just begun my teenage years that boys will find two girls kissing hot.

But why, why, why, why did Happy Endings have to resort to lesbians as being the punch line in yet another primetime television show? Especially considering how well they typically handle Max and his sexuality and the amount of praise I threw its way last week.

On one hand, I enjoy the flippant way in which Brad discarded the information that Jane had previous relations with women. He didn’t care, it didn’t bother him, but it got him curious.

If they had left it as that, as Jane shutting down the three-way suggestion the moment Brad thought it, this episode could’ve easily made the leap to a better rating.

I know I cannot be the only one annoyed at how lesbian characters are shortchanged in the media.

I’ve made mention before that many/all of the characters on this show aren’t what are typically known as likeable characters. Instead they’re grating, irritable and sometimes downright mean but tonight, for one of the few times for me, they pushed Brad too far. Having him throw a hissy fit over Jane wasn’t funny or endearing, rather it was annoying. This lead to his apology losing some of its potential warmth, and made the end gag with him watching the two girls kiss all the more repulsive because rather than this being a cute, character quirk like it would’ve been in so many other episodes, it was the irritating topping to a character soured by one episode.

This wasn’t a bad episode. Let me reiterate: not a bad episode. But it failed to compel me. How does one write an engaging review about an episode that managed to ignite nothing more than overwhelming apathy? I could have given or taken this episode this week and would’ve been fine with either scenario.

I’m not giving up hope because of one bum episode, but rather crossing my fingers that this was merely a glitch in an otherwise wonderfully crafted show. This show needs to plow on ahead and prove why it’s tragic it may be getting canceled so early, not feed into the fodder of why this show makes no difference to viewers. The show, showrunner David Caspe and the cast and crew have the talent and work ethic to execute well-planned episodes. It’s just a matter of seeing them form and actually come to be.

Let’s see what this upcoming Sunday delivers and hope for the best. I’m hoping that it all successfully gets pulled together.