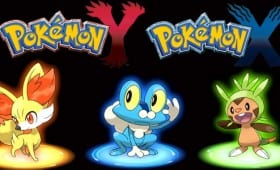 Satoru Iwata held a short Nintendo Direct this morning dedicated exclusively to talking about the history of the Pokémon franchise and revealing the next games to kick of a new generation of games.

Releasing internationally this October, Pokémon X and Pokémon Y will break away from the game’s familiar look and feel and feature dynamic camera angles, brand new Pokémon , and 3D graphics.

The video may be only a teaser of things to come, but battles look like those seen in Pokémon Stadium and Colosseum. Even walking around the region, which looks like it’s based off Paris due to its Eiffel Tower-like structure and architecture, sure looks different.

The the quintessential Grass, Fire, and Water starters have been revealed featuring rodent-like Chespin, the fennec fox Fennekin, and a blue frog called Froakie. Each version’s legendary Pokémon has also been shown, and include a bird-like Pokemon that forms the letter Y and a deer-like Pokemon with antlers shaped like the letter X.