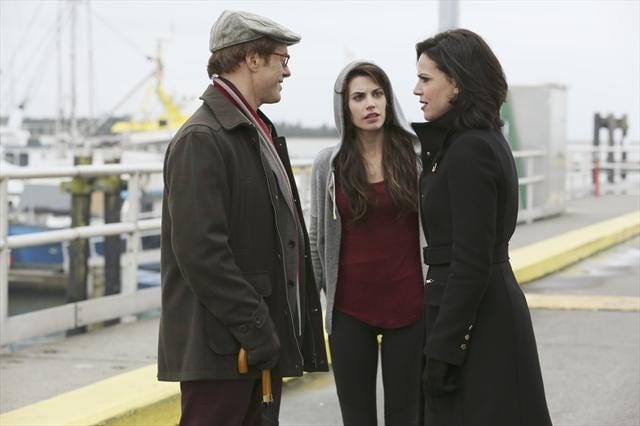 The first portion of the season was a mess and bordering on disaster. It wasn’t the show that we’d grown accustomed to last season, one that albeit was over the top, cheesy and sometimes bereft of decent dialogue and yet there was something, some spark that drew audiences in. Maybe it was the pure escapism factor, the period costuming, the magical CGI worlds, the visitation of old fairytales we’d all thought we’d fully explored. There was something fun and enjoyable about it and this season saw much of its “fun factor” disappearing. There was simply too much going on, too many characters with not enough depth and some atrocious storytelling.

Luckily, this week’s episode seems to have taken a tentative step in the right direction. Let’s just hope next Sunday follows suit and this wasn’t simply a fluke.

The episode begins as a continuation from the last. Cora and Hook have landed in Storybrooke. Hook wishes to kill his enemy Rumpelstiltskin and Cora means to break Regina and have her and her beck and call.

Snow and Charming are lying in bed about to get it on and it’s just as uncomfortable as you’d imagine. The two are whispering sweet nothings to each other about how long it’s been and how they’ve missed it just as Emma with Henry walks in. Awkward family moment number one.

Now before this may have just been a weird little run-in with a friend seeing another friend about to bang another friend. However, things have changed and now it’s Emma walking in on her parents and having to explain to her son why Grandma and Grandpa are in bed in the middle of the day.

I think I enjoy the Charmings like this: uncomfortable and getting used to the situation day by day.

They end up at Granny’s for a welcome back party for Emma and Snow. All of their friends are there and Charming once again says that awfully clichéd line “We’ll always find each other” and they all laugh and are merry because they’re fairytale townsfolk and that’s how they behave. Just as the speech has finished and the silence has settled in, Regina walks in to awkward and angry stares.

Emma invited her, for Henry, believing that she is making an effort to try and better herself and boy, do I prefer seeing these two strong female characters aiding each other rather than constantly being at one another’s throats.

As Regina watches on and others interact and laugh she grows noticeably put out and stands to leave. Emma runs after her and offers a hand of kindness to see if she’ll stay. Regina is as polite as she could be, giving her a sincere thank you and this version of Regina is so expertly played by Lana Parrilla that it’s easy for an audience member to give up on their past grievances with the character because here is someone who is obviously trying to change. She asks Emma if she could possibly see Henry more, noting sadly that his bedroom is still just there. Emma says she thinks that might be a bad idea and Regina snaps, asking her what she would know after five minutes of parenting. She immediately apologizes and says she shouldn’t have attacked her. Emma again accepts the good will and says that Archie told her that she’s trying to use magic less and she’s glad. This however angers Regina for she believes that Archie has betrayed her trust.

Cora and Hook watch as she walks away.

The next day Regina confronts Archie about divulging any of her secrets and he tries to reassure her. He didn’t give away any actual information he was just trying to help her out by getting her into the town’s good graces.

The next shot we see Regina (presumably) walk into Archie’s office and kill him. As she walks out we find out that it was Cora in disguise.

The flashbacks this episode seems pointless. It’s all about Snow and Charming’s capture of Regina and the decision they’re making about whether or not they should execute her or not. Just as it’s about to happen Snow cries for it to stop. Now, I understand that Snow White is seen as some sort of angelic and pure character and seeing the death of someone she knew as a child would be hard, but the Evil Queen had done nothing since save her from her horse that has proven her innocence. As a fan of the character Regina, Snows attempt to save her life seems unrealistic.

The next day in Storybrooke Emma and Red find Archie dead with Pongo’s (the dog) help. Or, what we’re supposed to believe is Archie dead.

Believing that it is Regina, Emma locks her up and her and Charming announce the news to Regina. Emma noticing that she seems genuinely shocked by the news decides that maybe some actual investigative work should be put in before falsely accusing someone.

They go to Rumpelstiltskin for some help (although I have no idea why) and he says that Emma can help herself by using her magic. She needs to look into Pongo’s mind and see what he saw the night before. She does so by dragging a dream catcher over him and then looking into the center.

Note to writers, come up with better ideas.

As she looks into the center she sees Regina lifting Archie up by the neck and choking the life out of him. Distressed and angered at her betrayal Emma, Snow and Charming make their way back to Regina with a plan to capture her.

Once the accusation is out, Regina is livid. She says that Emma cannot lie to Henry about this, that she is innocent and if she had wanted to kill Archie no one would know about it. It’s so clearly some sort of set up and Emma is too blinded to see as such. They argue and Regina says that she is Henry’s mother which spurs Emma into anger as she yells that she is his mom and Regina will never be seeing him again.

Realizing the set up she’s taken part in, after she attacks Emma, Regina disappears.

Later that day the Charmings are waiting for Henry to get off his bus and Emma talks about how she can’t deliver this sort of news to him like an actual parent because she’s been a mom for all of five minutes and she’s still learning. Charming, in a genuinely sweet moment, tells her that he’s been doing the same thing and he also has only been a parent for five minutes. He dismisses her refusal to acknowledge the two as the same thing and just tells her to be there for Henry and believe in herself.

And then, as we see Emma begin to tell Henry the truth we pan to Regina who’s sitting in her car, quietly mourning the loss of the last bit of happiness and hope in her life.

I’m almost getting tired of the ringer the writers are constantly throwing Regina through. If there seemed to be an ultimate purpose, a means to an end, it would be understandable. Regina is consistently making bad choices due to circumstances beyond her control. This isn’t to dismiss her immoral acts or the death she has caused but it helps put things into perspective. She is often the pawn to Cora or to Rumple, both of whom are trying to warp her into what they want and what will benefit them the most. The path set for her wasn’t an easy one and yet the show has been adamant in ignoring the depth that they themselves have created for the character. What good is character complexity if it’s simply the outlines—the bones without the meat? Seriously, such tragedy in a singular character and it’s wasted with the evil smirks and purple hearts of doom that will undoubtedly appear in the following question.

The last shot of the episode is of Archie alive, but captured by Cora and Hook and it’s so good to know that the show didn’t in fact kill him off. I’ve always been interested in his character since he’s for the most part, blameless and well-acted.

Overall, I believe I enjoyed this episode. There were obvious problems such as the pointlessness of the flashback and the fact that Cora is beginning to transition into a more overtly campy character than a genuine threat but otherwise, it was fun. Jennifer Morrison seems reinvigorated as Emma and the show seems to have gathered the remnants of what worked last season and are trying to mold them as best as they can into better second half of the season.

Where will the show continue from here? Will Archie spill the town’s secrets? Will Regina change back to pure evil or will the show try to actually develop her properly? Will the show head forward or backwards? We’ll have to wait and see.

A good start, cross your fingers for more.