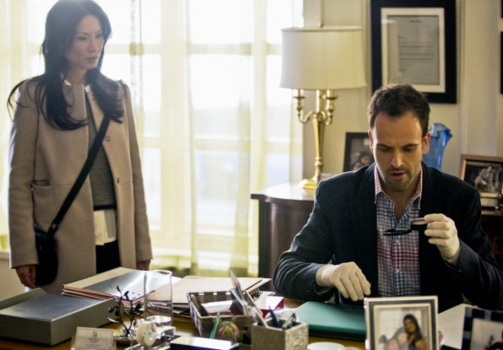 Light up your pipes, don your deer stalker hats and grabs your pistols dear Watsons, because the game is afoot!

Oh, wrong era? Wrong character incarnation completely? Oh well, it seems that my excitement has gotten the better of me, but how exciting is that? No matter the rough beginnings and the clunky plot lines this show has managed to become this viewer’s personal favorite and its return was greatly anticipated.

The second half of the season begins with the well-plotted bang that it should. The episode includes foul familial relations, a seventeen year-old going on thirty, some odds and ends with espionage and the “beginning of the end” of Watson and Sherlock’s time together.

Except, you know, not at all since there is an entire season to finish.

The episode, while all in all a bit lackluster, is more of a set up for what’s to come next week. It’s a warm up. As Sherlock says in the opening, he only has nine days left with Watson. That’s nine days for him persuade her into staying on with him, it’s nine days more of time for plot development, and most importantly, it’s nine days left to create a circumstance in which Watson would realistically be required to stay and aid Sherlock.

And who else is sick of the speculating and simply wants the answer now for how and why she is staying?

For this week, however, it’s simply another murder. Our victim of the week is Terri; a middle aged woman found stuffed into a washing machine.

Sherlock is called on and is able to deduce that the woman was dragged into the room and therefore murdered somewhere else as well. He says that the security cameras were out and that the murderer must have been familiar with the surroundings to know as much.

They move on to the victim’s office to search for more clues. Sherlock, after taking in the room, believes that she was putting on a show of being a nice person, rather than actually being as kind-hearted as she lead others to believe. There were alternative motives to her kindness. She wanted to appear warm and approachable—someone who loved her family as displayed as much with photography of her husband and daughter pointed out towards the visitors.

We all know the type.

They take a visit to the victim’s home to question the husband and suddenly we’re seeing Sherlock thrust into suburbia. He tells Watson that he’s surprised that she has yet to suggest a move to this area to him as a way to further help his recovery. She says that even though he’s joking, a suburban area is good for addicts for the sake of normalcy and routine. Sherlock isn’t the average addict, however, and from what audiences have been given of his character we can safely deduce that out of pure relentlessness, with little movement and excitement around him, he’d very likely drive himself up the wall.

Sadly for Sherlock, the husband has an alibi to his whereabouts during the time of his wife’s murder, despite their recently rocky relationship.

Watson meets the daughter Carly played by Melissa Farman (Lost, Temple Grandin) who has been plagued by her own past demons as well. Watson extends her help, telling her to call anytime she needs to. This scene would have been ten times more effective had the daughter’s supposed age not thrown me for a loop. In real life, Farman is only twenty-two, but she can no longer believably pass as a seventeen year old and asking audiences to do so only managed to pull them out of the scene.

The gossip of a neighbor leads the duo to their next suspect, a man who is believed to be the victim’s lover.

That idea is also shut down with yet another alibi, much to Sherlock’s chagrin.

They learn next that Terri had tried to shut down a prostitution ring that would happen in the lobby of the hotel she worked at and to get a closer look, Sherlock brings Watson to find one. In one of the funnier scenes, they interrogate a call girl who tells them that rather than trying to shut the business down, Terri simply attempted to keep it on the down low and would sneak the girls into the building, without gaining any profit from it at all. And in my favorite gag of the night as the woman departs she hands Watson her card, offering her a fun time as Sherlock looks on, dejected.

Now privy to this new information they get their hands on all of the footage from the security cameras in the visitor’s rooms. Upon the viewing of said footage, Sherlock discovers that he’s been tricked all along.

The victim and her husband were spies from Russia and were using the hotel as a means to invite foreign guests in able to obtain blackmail on them.

Now, granted this sounds a little more than absurd, and it kind of is. Luckily we’re spared from any caricature-like Russian accents that would have just been offensive.

They take in the father and interrogate him once again to try and figure out if he knew who killed his wife. He tells them that their marriage was an arranged one and they were pushed into having a child in order to appear more like a typical American family. However, although they shared no real affection for one another, their love for their daughter was real. They also had big plans for her.

Which leads to the phone call Watson receives from Carly herself. Carly tells her that her father isn’t to blame and confesses that she is the one who killed her mother.

See, I definitely didn’t guess the whole spy business, that one literally jumped out of the blue. However, I took an embarrassing amount of pride in the fact that I had guessed that Carly would end up being the perpetrator.

Watson brings her into the police department to give her confession. She tells them that her mother had confronted her and told her that she couldn’t go to her dream school; she wanted her to go to Georgetown to get a good education about politics. The dream of her mother was for her daughter to be able to infiltrate the government from the inside and become a spy like her parents. Carly wasn’t too excited and instead fought back against her mother and when Terri grabbed her she pushed back causing her mother to hit her head. Carly, presuming she was dead, allowed her family friend to help her. He said that if she held him and became a spy that she would help cover up her mother’s murder.

Carly is arrested, but her father is still in custody and Watson is thoroughly unhappy about it. Sherlock finds her in her room employing his technique of deduction. He tells her that the goal is find the answer, not to be happy with it. Despite the comfort, Watson still looks into the case and finds that Terri had broken her hand, presumably in a manner of fighting back. This is when it all falls into place.

They call the family friend back into questioning after letting him believe that the disposal of a body wouldn’t land him in prison for too long due to foreign politics. With the new information, Sherlock informs him that he’ll be there for much longer, probably for life. For when Terri was being dragged down to the washing machine, she wasn’t yet dead and began to struggle, hitting him, stabbing him with a pen (an invisible ink pen) and trying desperately to live. He had just managed to coerce Carly into joining his side and Terri living would be a damper on that idea. So instead he kills her. However, the invisible ink (don’t laugh) left hand prints all over his clothes, condemning him in the end.

So ends this week’s case, as ridiculous as it was. It would have been better suited for an episode that wasn’t the one that returned from a break. It wasn’t bad but it was however a bit boring in parts. Despite that though it still managed to instill a sense of excitement and heart in the last few minutes.

Sherlock this entire episode has been trying to convince Watson as to why it would be in her best interest to stay on with him since she clearly enjoys the line of work. What’s fascinating is that they have Sherlock desperate for the companionship, rather that Watson which is a welcome change. Sherlock is the one who has dealt with enormous loneliness, the one coming off of a stint in rehab and now has finally found an individual who fights back against him and yet seems to genuinely enjoy their time together. It’s a bond of friendship he never envisioned himself having and now that he has it why would he want to give it up?

Sadly, Watson turns the idea down quickly, saying that she’s already taken on a new client. And there, that is emotional impact that was missing throughout most of the episode and it’s what saved the episode from simply being a formulaic crime procedural. It was the heart of it and the sadness of the possible separation.

Now who can’t wait for next week? We’ll be getting M (could it be Moriarty?) and some form of emotional closure which promises great acting from Jonny Lee Miller and Lucy Liu, and an interesting narrative. I can’t wait, and I bet neither can you.

Isn’t it nice being a fan of a show that continues to promise good things?