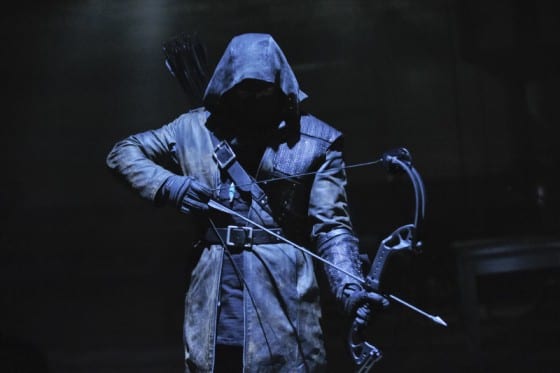 In Year’s End, Oliver must face off against a copycat killer who uses a bow and arrow to kill his targets

Last night’s midseason finale of Arrow pitted Oliver against his hardest foe yet: a copycat archer who begins killing off the high-level criminals that Oliver has already brought to justice. When a hostage situation arises, Arrow has no choice but to go head-to-head with the villainous bowman and put his skills to the test. In addition to dealing with the evil vigilante, Oliver attempts to save Christmas by restarting his father’s tradition of hosting a Christmas party at the Queen residence.  Though there were some corny moments in “Year’s End” and overall the episode wasn’t as captivating as the previous few, there was still enough meat to this midseason finale to bring people back to the show when it returns in January.

Nine episodes into “Arrow’s” first season, the writers really deserve credit for branching out and getting away from the repetitiveness of Oliver taking down new criminals off the list every episode. At this point, more emphasis is being placed on the origin of the list (somebody other than Robert may have compiled it) than the individual names on it. It’s always important for a show to evolve from where the pilot began, and Arrow has done so beautifully.  The last three episodes kept things fresh by introducing new characters that further complicated Arrow’s mission and by slowly revealing more about Oliver’s time on the island and about Moira’s connection to Robert’s death. The many different layers to this show have provided a strong finish at the midpoint and have set up intriguing possibilities for the back nine episodes that will begin in January.

In “Year’s End,” a new problem presents itself in the form of a mimic archer who is using Arrow’s previous targets as pincushions. Luckily, Detective Lance quickly realizes that the murders aren’t the work of “The Hood,” but rather someone else who is clearly trying to frame him. In an unprecedented move, Oliver reaches out to Lance for help, asking him to pass along one of the archer’s arrows so that he can track him down. Felicity Smoak helps Oliver trace the arrow to a warehouse, where he almost dies in a booby-trapped explosion. As Oliver struggles to find his new nemesis, his foe makes it easy for him by creating a hostage situation. He has one of the hostages read a videotaped message, stating that if Arrow doesn’t reveal himself in the next hour, the hostages will die. Oliver has no choice but to down the hood and make an appearance. He manages to free the hostages, but in his showdown with the copycat he takes three arrows to the body and barely escapes with his life. Later, in his hospital room, Oliver vows to Diggle that he will find this new enemy again and take him down once and for all. In the final moments of Year’s End, the copycat archer’s identity is revealed to be Malcolm Merlyn (a.k.a. Tommy’s father).

What an excellent way to reach the midseason break, with Oliver going up against an enemy who is actually better than he is. After watching him train tirelessly in his self-made gym and shoot tennis balls out of mid-air, we figured nothing would be able to stop Arrow in his quest to cleanse Starling City. But despite his impressive archery skills and physical stamina, he was still no match for the copycat villain in the end. It’s essential for heroes to suffer the agony of defeat every once in awhile, because an indestructible good guy is as exciting as watching paint dry. Up to this point, Arrow has found nothing but success in his endeavors and has easily thwarted all who stood before him, including The Huntress. But after pulling a Boromir in the warehouse (really, three arrows and he’s still kicking?) it’s clear that he has his work cut out for him after the break.

As always, there was more going on in “Year’s End” than Oliver’s plight with the copycat killer. After finding Moira’s copy of Robert’s list, Walter continues to look into the names and as a result, the Well Dressed Man gives the order to have him captured. Also, flashbacks to Oliver’s time on the island begin to delve into what was really going on there.  Yao Fai captured the man that tortured Oliver previously, Edward Fyers. Fyers explains that the island is acting as a sort of prison for China’s worst criminals, and that Yao Fai is one of them. He escaped a mass execution for the prisoners of the island, which is why he was searching for him and interrogating Oliver about his whereabouts.  As the flashback comes to an end, Yao Fai is ambushed and taken prisoner by the creepy-masked villain known as Deathstroke.

Unfortunately, it seems that Arrow is content to slowly relinquish the secrets of the island in little bits and pieces here and there over many episodes. It would be much more satisfying if the show just spent an episode focusing on the island and answering all the questions concerning what happened to Oliver while he was there. Gradually learning more information, bit by bit, really tests the audience’s patience and runs the risk of people forgetting something that was explained six or seven episodes ago. Plus, sometimes the island flashbacks can get lost when they are only a tiny snippet of a bigger episode that has so much else going on. We can hope for an island-centric episode, but chances are the writers are planning on stretching it out over the course of many episodes, or even many seasons, to come.

The weakest part of “Year’s End” was by far the “Oliver Saves Christmas” story line. It really felt like the writers had finished the episode and then realized they’d forgotten to work Christmas in somehow, so they just threw in this bit about Oliver restarting the Christmas party tradition. Plus, where did he find time to put the whole thing together?  These first nine episodes of the series have all emphasized that being Arrow means Oliver has little to no time to spend with his family, and that he’s never around. So how did he suddenly find the time to plan an extravagant Christmas bash at the Queens residence?  The whole candy cane race thing with Thea was rather corny and Tommy showing up with Laurel as his date was just as eye-roll worthy. It’s obvious that Laurel will eventually end up with Oliver, and there’s barely any chemistry between her and Tommy anyways, so let’s just move on from the Tommy / Laurel thing already.

“Year’s End” was a decent conclusion to the first half of a promising new series. Though “Arrow” is far from perfect, the writers have demonstrated the ability to introduce exciting new characters, break up the potential monotony of the show’s premise (Oliver using the list), and create exciting action sequences week after week.  Though the show can certainly have it’s melodramatic moments, Arrow is an intriguing addition to the CW’s lineup and one that has a wider appeal than the network’s key demo of 18-34 females.  If the last three episodes were any indication, Arrow is destined for a solid back nine episodes full of intense action, plot twists, and family drama.