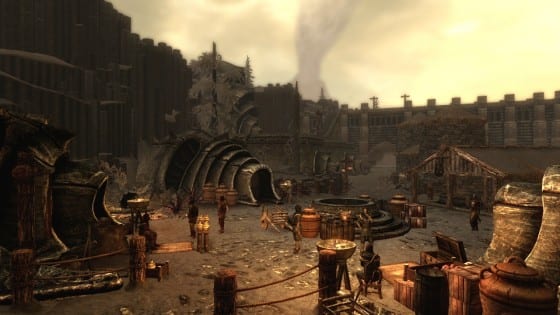 The fact that many Dovahkiin are still enchanting weapons and looting dungeons long after they’ve already slain Alduin, is a testament to how much initial content Bethesda included in The Elder Scrolls V: Skyrim when it was released in November of 2011. Over the past year, Xbox 360 owners have also been given the chance to battle (or become) a Vampire Lord via the Dawngaurd DLC, or focus on the domestic side of Nordic life via the Hearthfire DLC.  While these add-ons provided players with new content and hours of new activities, they both lacked that spirit of unique adventure and discovery that has become synonymous to the Elder Scrolls series. On December 4th, Bethesda bucked this trend with the release of Dragonborn, which has more content then you can shake a Staff of Lightning at.

After downloading Dragonborn, players are confronted by masked cultists in the first major city they enter. According to a note found on the corpses of the attackers, they were sent from the island of Solstheim, located just off of the northern coast of the neighboring province of Morrowind.  Players then set sail from the docks of Windhelm in order to discover the motivation behind the assassination attempt.  Once reaching the island, a larger plot begins to unfold involving a Daedric Prince, secret Dragon Shouts, and a previous Dragonborn.

Those that played Morrowind’s Bloodmoon expansion will definitely recognize a few landmarks scattered about the island, but rest assure that this a whole new Solstheim. Because of its location, Solstheim is heavily influenced by both Skyrim and Morrowind. Bethesda’s attention to detail thoroughly drives this point home, visibly demonstrating both provincial influences in architecture, armor, weapons, terrain, fauna, wildlife, and everything else. The wonderfully exotic Morrowind landscape and the traditional, less imaginative but nonetheless more beautiful Skyrim landscape make strangely good bedfellows, allowing players’ journeys to take them over frozen mountain tops, through dismal ashlands, and under towering mushrooms forests. In addition to Solstheim, players can also journey into the twisted library of the Daedric Keeper of Knowledge, home to bizarre creatures straight out of the imagination of H.P. Lovecraft. 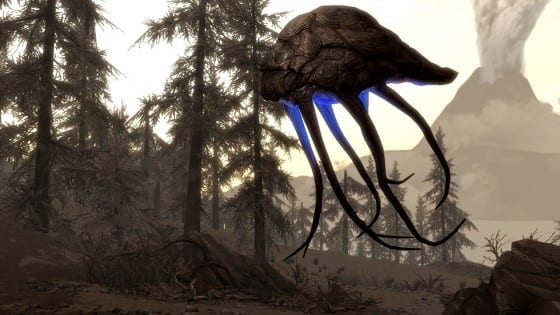 To face these new environments and the unfamiliar creatures that dwell within, players are provided with a selection of new toys.  Those who enjoy crafting their own armor will be happy to hear that Bonemold armor has returned, and a new rare mineral known as Stalhrim can be mined and eventually used in the creation of armor and weapons.  While players still aren’t able to craft their own spells, new “ash” themed spells can be acquired, which cause enemy paralysis. One of the most highly anticipated new additions in Dragonborn is the new ability to ride dragons, courtesy of a new Dragon Shout. Surprisingly, riding dragons is actually the worst part of this DLC. Dreams of soaring over Tamriel like Atreyu on a badass Falkor are dashed immediately upon liftoff due to the horrifically confusing and seemingly broken flight control scheme. After using it once or twice, most players will probably avoid dragon mounts altogether.

In terms of content, Dragonborn is far and away the biggest of the three Skyrim DLC packs and it’s priced as such at $20.00. But before you reach for your coin purse, know that Dragonborn is definitely not for everyone. The campaign itself can be completed in about four hours which, in comparison to Dawngaurd, may make it seem overpriced. Furthermore, because they include a companion (whether you like it or not), some of the campaign missions can be downright annoying, especially to players who focus on stealth. However, Dragonborn is unlike its linear predecessor as it essentially provides players with more new toys and a new sandbox to explore. Players who prefer completing side quests, exploring, or just doing their own thing will be exceptionally happy with Dragonborn as it is truly deserved of the term “expansion”.