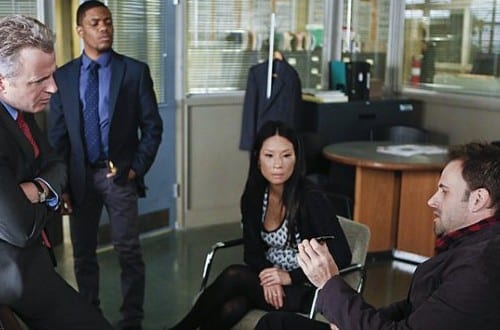 Sherlock (Jonny Lee Miller) tries to explain what he’ s deduced about the dead professor.

Welcome back Elementary, we’re all glad to see you after last week’s misadventure with that other weird, slowly-paced, oddly formatted crime procedural.

Let’s all tweet and flutter about about how much we as an audience all preferred this wonderfully crafted and executed, comically written episode that showed actual, emotionally charged character growth over the fluff piece that was last week’s installment.

The week hasn’t been kind on my opinion of the previous episode. Actually, the more I reflect upon it, the more I’m less and less enthused over the mediocrity that transpired.

Old news however, especially when this week delivered, once again, a top-notch episode.

There were many things that this episode did well, namely, as opposed to last week, the case. The investigative portions still require some touch ups and facelifts to allow them to appear glossier and less thrown together, but this was a step in the right direction so that while the outcome was a surprise, the audience could go back and conceivably piece it together.

It all begins with a shot of a barrel of a gun, staring down a seemingly frightened silly man, who refuses to move or beg just as the gun goes off. It’s a nice little touch for the episode to do, especially with the twists and turns that arise over the course of the hour. Introduce us to the victim and allow us to generate a quick opinion so that for the rest of the episode we’re judging his character based on what the brief moment allowed to us.

A sick Sherlock must then attend to the case and it’s from there that the plot, or for any Sherlock Holmes nerds, the game thickens. They find the dead man’s body removed from the place in which he was killed, with two bullets shot directly into his eyes. Despite Sherlock’s husky voice and rising temperature, he manages to deduce that the man was a gambler and he and Detective Bell go to the man’s old office at the university where he worked as a professor.

Yes, Sherlock is very ill for the majority of the episode, but I’ll get to that later since it contains my favorite bit.

They go to the office and it’s there they meet the dead man’s teaching assistant who later becomes a prime suspect when the man’s phone is found in his room. However, after some thought Sherlock comes to the conclusion that he is wrong and tries to convince Gregson, but he’s having none of his feverish hunches.

This leads Sherlock to the dead man’s wife who confesses to the affair with the teaching assistant, and more so, the sadistic and vile acts her fake husband (we learn they’re not married and she fears deportation) perpetrated. He used to beat her so that there was no proof, forced her into sexual acts against her consent, and allowed it all to hang over her head because if she spoke out she risked being separated from her son.

This leads Sherlock back to the teaching assistant who he’s convinced is innocent but is now worried that he may have compromised the wife’s life just by asking her questions and revealing her passport status to authorities while under the impression she could be the murderer.

Finally, all of the pieces click. With Watson’s medical expertise they realize that the dead man had cancer and only a few months to live, and from there discovered that he ordered the hit himself. He found a man to do the job, paid him off and then, in his last act of torture after learning of his wife’s affair, planned to have it set up to frame her for the deed.

However, it didn’t go as plan when the attacker jumped the gun (excuse the choice of words) and decided to begin the plot early.

To be a successful episode each and every component needs to perform to the best of their abilities and in “You Do It To yourself,” showrunner Robert Doherty and co. succeeded.

Peter Blake (House) has written himself a proper villain for the episode. He’s developed a truly horrendous, irredeemable, reprehensible man to be the puppeteer of the entire act.

Director Phil Abraham, who’s directed for shows such as Mad Men and The Sopranos (maybe you’ve heard of them), delivers tonight with some beautifully shot and designed scenes. Whether it be the lone Sherlock wrapped in a blanket in the middle of a sparse and spacious room, or a bleary underworld of crime, violence and gambling, his stylistic approach to helping narrate the story in pictures allowed the source material a heightened quality.

And then, finally, the wondrous dynamic between Sherlock and Watson, which was allowed to progress once again after a previous stalemate episode and it did so beautifully and more importantly, with subtlety. Rather than being hit over the head with a “look their friends now” bat.

Throughout the season so far we’ve seen a tentative, if not friendship, respect begin to grow between the two. And why would they grow close? He is a past junkie who’s used to not forming proper relationships and for a large portion of his adult life has lived on his own, dependent only on himself—that lone, tortured soul junk that on any other character would just seem horribly cliché. She makes a living out of assisting people for short amounts of time before leaving them and hoping that they continue on the path of recovery, which as we saw this week, doesn’t always turn out the way it should.

It wouldn’t be logical for the two to be BFF’s or to be the characters portrayed in classical literature with the setting and the times they’ve known each other in. What we’re getting is natural and gratifying progress. We watch our favorite characters onscreen slowly begin to develop a semblance of trust between the two, the two damaged individuals.

Typically we’ve seen Watson learn from Sherlock; pick up his mannerisms and ways of deduction. But this week, albeit quietly, we see Sherlock pick up a bit of her compassion.

It begins with him being sick. Although she makes sure to profess that she is neither his mother nor his caretaker, she still finds herself fretting briefly here and there over his health. And while he’s not the warmest of individuals, he’s thankful. We see that thanks when he asks her for help with some more tea, and it’s simple and brief but for a character of such solitude, it’s a step.

The next revelation in friendship comes at the tail end of Watson’s subplot this week. An ex-boyfriend has called her up asking for her help. He’s been convicted of a hit-and-run that he doesn’t believe he’s done and he wants her and Sherlock to help him out. At first she refuses, but with a nudge from Sherlock she ends up discovering that her ex was in fact correct and he is an innocent man.

For the most part; here’s the catch:

In a conversation with Sherlock she tells him that the two had started dating back when she was still in medical school. It was later down the relationship that he began to abuse drugs until it got so bad that she staged an intervention and drove him to rehab. Initially, when he was out, she thought he was better until he began lying again and disappearing into a drug haze, and she finally had to let him go, So when she later would leave her medical license behind her, being a sober companion seemed like an obvious choice.

It’s potentially the most insight we’ve gotten from Watson’s character all season and Lucy Liu plays it with the right amount of determination and vulnerability.

When her ex is released she tells him she can help him into a clinic and tells him where to meet her, but sadly we all know how this will turn out.

Later while Watson’s sitting, knowingly and disappointed despite herself, and Sherlock arrives at first we’re surprised. And then, Watson tells him that he didn’t have to come and he passes it off as boredom. But then as they sit and Watson tells him that if he has better things to do it’s fine and he responds with a “Not tonight Watson, not tonight” you realize that this is an organic growth of a relationship. Maybe it’s because he has realized all of the kind acts she had done for him, maybe he truly was bored, but more likely, he was supporting a friend. He saw she needed companionship and after being on the receiving end for so long he instead returned the favor. While there was no patted knees, shoulders to cry on, or “there there’s” when the ex didn’t show, there was solidarity. A form of camaraderie in the face of disappointment and the mutual understanding of not getting one’s expectations up. It was a wonderfully shot last scene, scored beautifully, and it may have alone swayed my opinion on the episode entirely. Jonny Lee Miller and Lucy Liu’s chemistry was dialed up and it worked.

Simply put, this was a very well-crafted episode. It had humor with Detective Bell and Sherlock’s banter, the latter’s illness, the line—“My brother in track-marked arms”— in regards to Watson’s ex, and the total disregard Gregson has for Sherlock’s crack pot theories. It almost had a wonderfully thought-out mystery and the acting was the best it has been.

Check it out, don’t regret it, and await the next episode and let’s hope it’s as good.