Irrational Games announced today that the highly anticipated sequel in the Bioshock universe, Bioshock Infinite, has been delayed until March 26, 2013. The announcement comes after former Epic Games producer Rod Ferguson joined the team back in August. ““He was there for about a month and he said, ‘look, I’ve been looking at the schedule and looking at the game and frankly you could really benefit from another three or four more weeks for polish and bug fixing,” said project lead Ken Levine in a recent interview with EuroGamer.

When a studio like Irrational Games chooses to delay a game, you know it is for the sake of perfection. Their immaculate track record only serves to show the passion they put into the product they make and the amount of talent in the development staff alone nearly guarantees that Infinite will be a landmark game for this generation. However, the inner fanboy inside me can’t help but feel like this: 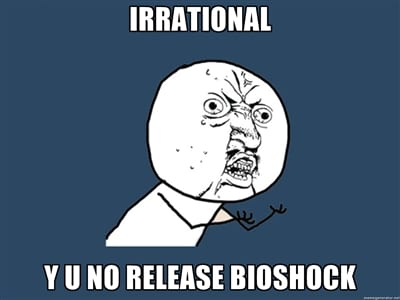