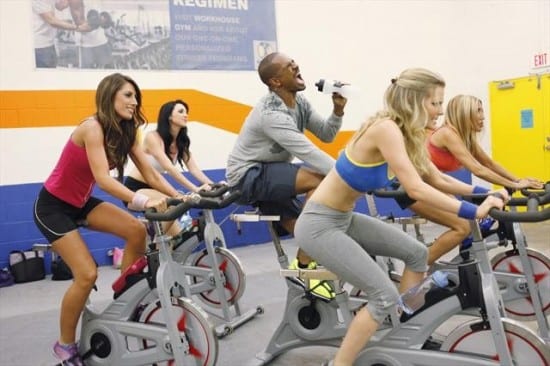 I don’t know about you, but is there anything more uncomfortable than an awkward high-five or fist bump? I don’t begrudge those who wish to share their enthusiasm with others, but when I’m brought into it I freeze in prescribed embarrassment. There are only a couple of directions that this course of action could take. I could, one, give a half-hearted high five that dampens the spirits of the receiver, I could, two, wait too long with the fist bump, staring at it wondering if the individual is really asking me to do such a silly action and if I should turn my ring around quickly as two not stab the expectant party, or, three, I could turn my mind off for a second and just wave my hand about in whatever fashion they wish all willy nilly.

I don’t know when I became a person that allowed forms of greeting or celebration to become a bane of existence, but alas, so the hilarity of Max’s fury at the man who cheated him out of a real fist bump is doubled. What’s better is that not only is his entire plot of the episode absolutely weird and just so Max-like, but the rest of the characters for the most part follow suit.

This is possibly one of the most bizarre episodes of Happy Endings I’ve seen, what does that tell you.

Each character has a plot that requires them to wade around in their element, which is extremes.

However, it doesn’t go as planned because when they don’t react to the sport talk, one of the men’s wives ask about the candle sitting on the table and asks Jane where she got it. Insert one of the best moments of the episode with Brad jumping up to take claim and saying that he made it in his candle making station in the laundry room.

Instantly, this sets up the plot for the episode with Brad’s personality aligning itself with the wives which sets up Jane’s inclusion with the rest of her coworkers.

A montage of Brad on spinning dates and Jane bonding with the other men later we see that Jane’s reached her tipping point of madness and treats Brad terribly when he comes to visit, trying to pay him off so that it appears she’s a “top dog” in the household. Brad bristles and leaves with the money, all a part of his master plan that comes later.

In one of the other best moments of the episode—and the reason why I will argue vehemently for Wayans Jr. to get some award and then proceed to whine and stomp my feet when he doesn’t because the show isn’t “mainstream” enough—he comes stomping into the car dealership, decked out in tennis gear, with a small, squealing pig in tow, ready to cause a scene.

And so he does, yelling at Jane, asking for new cars, playing up the “trophy wife” cliché that she’s been treating him like, until Jane finally tells him to stop embarrassing her and he accuses her of doing the same thing to him earlier. She catches herself and apologizes, actually seemingly as ashamed as Jane can get, and they make up, accepting their status once again as the best partners ever.

In the lesser part of the episode Penny has to wear a helmet for a month due to her “cartoon coyote” amount of times she’s hit her head, which has left her still with a mild concussion. The premise is hilarious, since Casey Wilson shines when given physical comedy to work with. However, she then meets a guy who wants to take her out a date and she spends almost the entirety of the episode trying to figure out dates that involves wearing helmets with a date on a construction site being the last straw.

It would have been fine if Penny’s desperation wasn’t written so sad. Typically, her humor comes from her constantly seeking a boyfriend and her extreme enthusiasm over new tasks, but never before have I found her want for a boyfriend to be written as sad as it was this week. It may simply be an issue I’m touchy about and this show is all about the absurdity of its characters and the lengths they’ll go in just about any situation, but this week her attempts were almost distractingly sad. I hope showrunner David Caspe begins to foresee a Penny that has a little more of a backbone because season three has simply had her simper and whine, and I love a Penny who has zero shame in her conquests.

Luckily for her, the episode ends happily with her admitting her injury and the guy accepting it which leads us to wonder if the ridiculous Dave and Penny plotline is finally over and if this new one is planned to return any time soon.

The best episodes are the ones that allow Max and Adam Pally to not hold back in the hammy performances he’s able to deliver. When Max goes to give a random guy a fist bump and the man then turns it into a “turkey bump” he’s outraged.

Dave tries to pacify him, telling him that it’s no big deal, but Max disagrees. He says that there is something unfailingly sacred about a fist bump, able to bring people together. He then laments on a memory of a playground incident when a boy faked him out of a low five, permanently scarring him forever.

It’s just the right amount of ridiculous, which in this case means completely over the top, and Dave’s reaction makes it all the more so.

Apparently, he was the creator of the fake-out low five, which is the cause for all Max’s issues. He runs off, ashamed and distraught over his accidental deception of Max and goes on a sangria drinking binge.

Which is just about the best Dave thing that’s ever happened on the show.

Max recruits Alex, a character we deserved more of this episode, and they go and find Dave in their usual restaurant, halfway through a pitcher of sangria, lips already stained red. Dave apologizes again and I’ve said it before but Zachary Knighton is best when he’s embarrassing himself. He looks silly, he’s acting silly and it works because in his drunken guilt he tells Max that he’ll help him overcome the guy’s attempt at ruining a high five/fist bump.

Which leads to a fist bump show down.

I don’t know many other shows that could make that a legitimate plot point.

This time when Max is “turkeyed” he then chops the turkeys head off by sliding his hand between his and the other guys. However, when Dave tries to explain Max’s traumatic past experiences the guy fakes him out once again, using a device called “to squid away.”

I honestly don’t know how I’m supposed to explain this image to anyone so I just urge you to go watch because this was a much improvement over their Thanksgiving episode. It was fun, it was balls out, and it didn’t hold back whatsoever at allowing itself to be one of the strangest shows on television right now. It allowed its three funniest characters to shine, the most interesting couple on television got its deserved spotlight, and there was a storyline that involved high fives and cartoonish squealing pigs.

That, we may be seeing more of next week. Seriously, could we somehow manage to get an episode that involved Max and Brad watching the pig and the misadventures that it leads them to and the whacky hijinks involved? Just putting that idea out into the atmosphere, now let’s all hope really hard that it actually happens.

Is it an episode that will convert non-fans? No, it’s not exactly easily accessible. It will be a welcome return for old fans though that have been watching from the very beginning and have been watching with horror-filled eyes as the ratings continue to drop despite the originality and talent that this show possesses.

With that said, watch this show. While the episode could have used more Alex and less Penny it was almost on its game. This show has a great cast and it’s one of the best forms of television escapism out there.